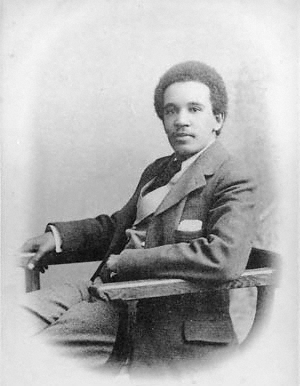 Taylor, Samuel Coleridge- (1875–1912), composer, was born on 15 August 1875 at 15 Theobalds Road, Holborn, London. His parents were registered as Daniel Hugh Taylor, surgeon, and Alice Taylor, née Holmans. His father was in fact Dr Daniel Peter Hughes Taylor (c.1848–1904), who returned to his native Sierra Leone after studying at Taunton and King's College, London, probably unaware that Alice Hare Martin (1856–1953) was pregnant. There is no record of their marriage. Alice raised her son in Croydon, aided by her mother, Emily Ann Martin, and by Sarah and Benjamin Holman or Holmans. This latter may have been Alice Martin's father; he gave Samuel Coleridge Taylor a violin in 1880 and his first violin lessons. Holman's son Benjamin (1839–c.1915) was a professional musician living near Folkestone from the 1870s and had three musical children. The family expanded after Alice Martin married George Evans (c.1837–c.1908), a railway storeman. Their three children also had music lessons, and their son, Victor, also became a professional musician, without achieving the fame of his half-brother.

Coleridge-Taylor (he adopted the hyphen in the 1890s) was a small man, with tiny fingers that would have made a successful instrumental career unlikely. His obvious African descent attracted attention (W. Wallis, a local artist, painted his portrait in 1881), and he was noticed by a silk merchant and army volunteer, Colonel Herbert Walters, who encouraged him in church choral music and in 1890 sponsored him at the Royal College of Music. This patronage (the first biography of the composer was dedicated to Walters, 'to whom the world owes the discovery of Coleridge-Taylor') led commentators to ignore the early music lessons and drew attention away from his unorthodox family. His family had little of the respectability so important in Victorian society, and this, along with his African descent, profoundly affected Coleridge-Taylor. He won a violin scholarship to the Royal College of Music for four years, but changed to study composition under Charles Villiers Stanford. His works were presented at college concerts, attracting the attention of August Jaeger, whose employer, Novello, published Coleridge-Taylor's five anthems in 1892. Jaeger reported his progress in the press, and became a formative influence. Jaeger and Edward Elgar recommended the Three Choirs festival to commission the ballade in A minor, which was performed in September 1898. Two months later 'Hiawatha's Wedding Feast' was premièred in London; these early successes encouraged Coleridge-Taylor to become a professional composer. On 30 December 1899 he married Jessie Sarah Fleetwood Walmisley (1869–1962), daughter of Walter Milbanke Walmisley, stockbroker, and a distant relative of the composer Thomas Attwood Walmisley. They had a son, Hiawatha (1900–1980), and a daughter, Gwendolen (later Avril) [see Taylor, Avril Coleridge-], who were both to have musical careers.

'The Death of Minnehaha' (October 1899) and 'Hiawatha's Departure' (March 1900), with an overture, completed the cantata The Song of Hiawatha; which for decades was a much beloved and performed staple of choral societies. Having sold the copyright to Hiawatha, Coleridge-Taylor derived no lasting financial benefit from the popularity of the work, and financial pressures help explain the volume of his compositions: he poured out incidental music for the theatre (much commissioned by Beerbohm Tree for His Majesty's Theatre), sacred and secular choral works (of which A Tale of Old Japan, 1911, is perhaps the best), pieces for strings and for piano, orchestral works, and an unpublished grand opera (Thelma, 1907–9). His capacity for melodic line was strong: Jaeger observed 'Here is a real melodist at last' and that 'He has a quite Schubertian facility of invention' (Brewer, 94); Elgar wrote 'I have Taylor's theme jogging in the vacuities of my head … the theme remains' (Young, 12). However, apparent haste in orchestration can be heard in some of his instrumental works. Hiawatha's popular success came in part from its secular theme, which meant that performances were not restricted to the church calendar, but also from its musical repetitions and simple developments, which suited its amateur performers. In the 1920s and 1930s thousands attended colourful performances of Hiawatha at the Royal Albert Hall, London. Generations of piano students played 'Demande et réponse' from his Petite suite de concert.

Invited by the Coleridge-Taylor Choral Society of Washington, DC (founded in 1901 by black choral singers), Coleridge-Taylor three times visited the United States (in 1904, 1906, and 1910). His identity as a black composer was important to him, and provided inspiration for a number of his works: he used themes from spirituals in the overture to Hiawatha; the symphonic poem Toussaint l'Ouverture (1901) was concerned with Haiti; and he wrote the operatic romance Dream Lovers (1898) in co-operation with the African-American poet Paul Dunbar, who had also inspired the songs in his African Romances (1897) and the keyboard African Suite (1898). Seeking melodies in folk music was widespread in the 1890s, and Coleridge-Taylor used African, Caribbean, and American themes in his 24 Negro Melodies (1905) which was published only in America, with a preface by a leading African-American citizen. He was visited in Britain by leading musical African-Americans, including the baritone Harry Burleigh and violinist Clarence Cameron White, who worked with Coleridge-Taylor in Britain. Back in the United States they encouraged performances of his works in black colleges, developing his identity in that country.

Coleridge-Taylor taught composition (at Trinity College of Music, London, from 1903, and at the Guildhall School of Music from 1910), judged competitions, and conducted orchestras around Britain. He was improving his German, in anticipation of visiting that country, when he died from pneumonia at his home, Aldwick, St Leonard's Road, Croydon, on 1 September 1912, at the age of thirty-seven. Thousands attended his funeral and interment at Bandon Hill cemetery near Croydon.

Coleridge-Taylor's music fell out of favour with the decline of the amateur choral societies after the Second World War, and even Hiawatha and A Tale of Old Japan have been seldom performed since the 1960s. A revival of interest in the composer, as a symbol of the achievements of black Britons, took place towards the end of the century. The mixed responses and inconsistencies of his obituarists reveal something of the prejudices against which his work was judged: one paper thought he had brought 'an exotic raciality into English music' (Manchester Guardian, 2 Sept 1912), while another wrote 'Of African rhythms or folk-music pure and simple there is here no trace' (Daily Telegraph 2 Sept 1912). The Times declared that the original features in his music were 'racial characteristics' (2 Sept 1912), and two years later, the African-American composer and conductor James Reese Europe declared that Coleridge-Taylor's was 'not real Negro work' (Badger, 126). Coleridge-Taylor was a man of gentle disposition and great personal dignity; his works enjoyed enormous popularity, and although his significance has come to be seen primarily as that of an icon of black success, his achievements as a composer of light orchestral and choral music were noteworthy.