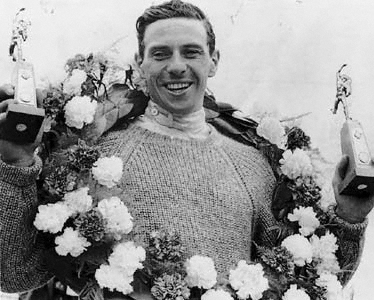 Clark, James [Jim] (1936–1968), racing driver, was born in Kilmany, Fife, on 4 March 1936, the only son and fifth child of James Clark, farmer, and his wife, Helen Rorie Niven. Educated at Loretto School, Edinburgh, he left at sixteen and went to work on the family sheep farm on the borders. Like many farmers' sons he was at home with machinery and handling cars off the road long before he was old enough to take a driving test. Another border farmer, his older brother-in-law Alec Calder, brought motor racing into the Clark family through driving a Brooklands Riley on Scottish circuits in the early 1950s. The young Jim Clark would go and watch, and it was not long before he was taking part in local motor club events with a Sunbeam Talbot Mark III which he would drive with great style.

Écurie Écosse, Le Mans winners in 1956 and 1957, were the heroes of Scottish motor racing and it was Ian Scott Watson's revival of the Border Reivers racing team in opposition to them that was to set his friend Jim Clark on the road to two world drivers' championships. Clark's intended role had been that of mechanic to Scott Watson but his natural driving genius was soon so apparent that a secondhand D-type Jaguar was bought to do it justice. In winning with the car at Full Sutton on 5 April 1958, Clark became, at twenty-two, the first post-war sports car driver to lap a British circuit at over 100 m.p.h. With his innate ability he had started as he was to continue during a decade that saw him become the greatest driver of his time.

Success with the Border Reivers led to wider recognition and Clark's connection with Colin Chapman's Lotus team, which was to last throughout his career in top-class motor racing. In 1960 he had his first race in a Lotus grand prix car at Zandvoort and contested fourth place with Graham Hill's BRM before retiring with a seized gearbox on the forty-third lap. Resisting offers from other grand prix teams, including Ferrari, Clark stayed with Lotus for 1961, the first year of the new 1.5 litre engine formula. During the Italian grand prix at Monza, Clark's Lotus and Wolfgang von Trip's Ferrari touched at the Vedano curve. The German driver was killed with fourteen spectators when his car crashed into the crowd. Clark was numbed with horror but physically unhurt.

A winter trip to South Africa, where he won three races out of four, restored Clark's morale and he was able to look forward to the 1962 season with confidence. Lotus now had the Coventry Climax V-8 engine and, with BRM, were in a better position to do battle with the Ferraris. In only his third season in grand prix racing Clark was established as a contender for the world championship, which he was destined to lose to Graham Hill's BRM during the last race of the season in South Africa. Clark was leading as usual when a bolt failed on the sixty-third lap, causing the engine oil to leak away.

It was a different story in 1963 and the combination of Clark and the Climax-engined Lotus 25 achieved seven grand prix victories in a season—a record which long remained unbeaten. Clark also nearly won the American Indianapolis 500 classic. In 1964 the pattern of 'Clark wins' or 'Clark retires' was well established, but in that year he had more than his fair share of mechanical problems. Despite this it was again the last race of the season that was to decide between Clark, Graham Hill, and John Surtees (Ferrari). This time a fractured oil pipe ended Clark's chances and Surtees became world champion.

The year 1965 was Clark's greatest, with a second world championship and victory at a new record speed at Indianapolis. At the Nürburgring, the most difficult circuit of all, he set race and lap records and there was another remarkable feat—five consecutive grand prix wins. Twice world champion, and having just missed the title twice more, Clark had dominated the 1.5 litre formula which was superseded by the 3 litre formula in 1966. Only Jack Brabham was properly prepared, with his Repco engine, and he took the title. In an unhappy season with unsuitable engines Clark won only one grand prix race.

The following year, 1967, saw the arrival of the most successful grand prix engine ever, the Cosworth-Ford DFV, which went first to Lotus. Clark won his fifth British grand prix at Silverstone and four others but the world championship went to Denis Hulme (Brabham). Clark won the first grand prix of 1968, in South Africa, to bring his total to twenty-five, a figure not passed until 1973, by his friend and fellow Scot Jackie Stewart. He seemed set for another championship year until his death on 7 April 1968 in a minor Formula 2 race at Hockenheim. The Lotus swerved off the track at high speed into trees, killing Clark instantly. The most likely explanation is thought to be a puncture. Clark's death stunned the motor racing world. In the most competitive of sports he was admitted to be master by those who raced against him. Juan Manuel Fangio, five times world champion, described him as 'the greatest driver in the world'. His incredible car control, race craft, and ability to nurse an ailing car to victory were matched by his sportsmanship.

Of medium height, with dark hair and a flashing smile which could light up his whole face, Clark was a true representative of his border farming stock. Modest, unassuming, and shy of the fame his racing exploits attracted, he was never happier than when relaxing at home. Reserved with strangers, only his friends knew the impish, practical joker in his nature. Had he survived the 1968 season, he might have retired from motor racing and combined farming with his new love of flying light aircraft. Since he believed that racing drivers should not marry, he was a bachelor.

Appointed OBE in 1964, Clark became first honorary burgess of Duns the following year. The Jim Clark Memorial Room at Duns contains many of his trophies and a painting in oils by Gordon Ellis.