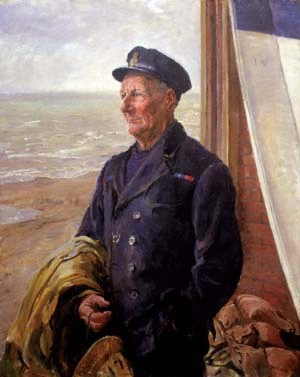 Blogg, Henry George (1876–1954), lifeboat coxswain, was born in Cromer on 6 February 1876, the son of Ellen Blogg. He was educated at the Goldsmiths' School, Cromer, where he proved quick at learning and revealed an unusually retentive memory. He took no part in games, failed to defend himself against bullying, and never learned to swim. When nearly twelve he began life as a longshore fisherman. In 1894 he joined the Cromer lifeboat crew, becoming second coxswain in 1902, and coxswain in 1909. His record of service was unique, and when he retired in 1947 Cromer's had long been the most famous of all lifeboats and Blogg himself an international character.

A silent, reticent man who neither smoked nor drank, he had a quiet kindliness and humour and remarkable qualities of personality and endurance. He inspired complete confidence in his lifeboat crew, who knew him as a superb seaman: quick and resolute in decision, unerring in judgement, fearless before danger. On 16 October 1901 Blogg married Annie Elizabeth (1877/8–1950), daughter of Henry Brackenbury, fisherman, of Cromer. Their only son died in infancy and their only daughter in her twenties.

During Blogg's fifty-three years with Cromer lifeboats 873 lives were saved and he was three times awarded the gold medal of the Royal National Lifeboat Institution. He won the first of these in 1917 for rescuing eleven men from the Swedish steamer Fernebo. His crew of ageing men had already been at sea for several hours and had taken sixteen men from a Greek steamer, Pyrin. When the call to the Fernebo came it proved impossible to launch the lifeboat against the mountainous seas. A second attempt was made after darkness fell, but when the boat was halfway to the wreck she was hit by a tremendous sea and, losing several oars, was forced back to the shore. Undaunted, Blogg seized his moment to make yet another attempt, which succeeded.

By 1927, when Blogg received his second gold medal (for rescuing fifteen men from the Dutch tanker Georgia after twenty hours at sea), he was using a motor lifeboat and the difficulties of launching had been overcome by the building of a slipway. In 1941 he was awarded his third gold medal and also the British Empire Medal for rescuing eighty-eight men from six steamers in convoy. He was four times awarded the Lifeboat Institution's silver medal, for rescuing thirty men from the Italian steamer Monte Nevoso (1932), two from the barge Sepoy of Dover (1933), twenty-nine from the Greek steamer Mount Ida (1939), and forty-four from the steamer English Trader (1941). He received the Empire Gallantry Medal in 1924 and the George Cross in 1941; in 1948 the new Cromer lifeboat was named the Henry Blogg. Blogg died in the Cromer and District Hospital, Cromer, on 13 June 1954.