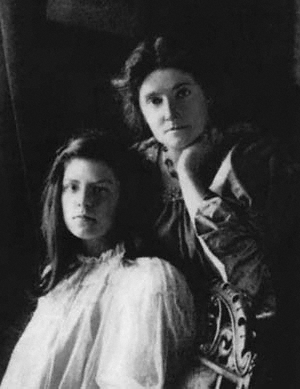 Nesbit [married name Bland], Edith (1858–1924), writer, was born on 15 August 1858 at 38 Lower Kennington Lane, London, the youngest of five children of John Collis Nesbit (1818–1862), who owned the agricultural college where she was born, and his wife, Sarah Green, née Alderton (1818–1902). Her grandfather was the schoolmaster and land surveyor Anthony Nesbit (bap. 1778, d. 1859). As well as her sister Mary (1852–1871) and brothers Alfred Antony Nesbit (1854–1894) [see under Nesbit, John Collis] and Harry (1855–1928), Edith (or Daisy, as she was called) had a half-sister Sarah (Saretta) from her mother's first marriage. Another brother, John, had died aged six before she was born. All their lives changed when her father, John Nesbit, died quite suddenly in March 1862. For a year or two Sarah Nesbit continued to run the college, but Mary was ill with tuberculosis, and needed a warmer climate. The family moved, first to the seaside at Brighton, and then to France, and the younger children were sent to boarding-schools. Edith alternated between hated schools or equally hated relatives, and idyllic holidays reunited with her brothers. These extreme contrasts made her childhood peculiarly memorable: 'When I was a little child I used to pray fervently, tearfully, that when I should be grown up I might never forget what I thought and felt and suffered then', she wrote, in 'My school-days', and she never did.

In 1871 Mary, who had been briefly engaged to the poet Philip Bourke Marston, died, and Sarah settled her family at Halstead on the North Downs, Edith's favourite home. Here she wrote her first poems, and sent them off for publication. Four years later the family moved back to London, and in 1877 Edith met Hubert Bland (1855–1914), who was working as a bank clerk with her fiancé, a young man called Stuart Smith. She fell in love with Bland at once, and by the end of 1879 she had left home, called herself Mrs Bland, and was expecting his child. The couple were married on 22 April 1880 in a register office, and their son Paul was born two months later. Bland continued to spend half of each week with his widowed mother and her paid companion, Maggie Doran, who also had a son by him, though Edith did not realize this until later that summer when Bland fell ill with smallpox. With characteristic optimism, she forgave him, befriended Maggie, and set about supporting the household by writing sentimental poems and short stories, and by hand-painting greetings cards. A daughter, Mary Iris, was born to the Blands in 1881.

Bland was a disciple of Thomas Davidson, founder of the Fellowship of the New Life, and Henry Hyndman of the Social Democratic Federation, and in 1884 Edith followed Bland into the Fabian Society. Here she became an ‘advanced woman’, abandoning Victorian corsets in favour of flowing Liberty gowns, cutting her hair short, and smoking cigarettes; she told her friend Ada, 'I really surprise myself sometimes' (Briggs, 68). Among her new friends she now counted Eleanor Marx, Olive Schreiner, Clementina Black, Charlotte Wilson, and Annie Besant.

With Hubert (often out of work) Edith wrote two novels, The Prophet's Mantle (1885) and Something Wrong (1886), about the early days of the socialist movement, under the pen-name Fabian Bland, and their son, born in 1885, was named Fabian. In February of the following year Edith gave birth to a stillborn child, and her friend Alice Hoatson came to look after her. But Alice was also pregnant by Bland. She joined the Blands as their housekeeper in a ménage à trois, and a daughter, Rosamund, was born in November 1886. Edith passed the baby off as her own (as again with Alice's son by Hubert, John). Life in such circumstances was not without its tensions, but Hubert's infidelities licensed Edith to pursue her own interests, and she fell in love, first with Bernard Shaw, and later with a series of young admirers. The poet Richard Le Gallienne was charmed by her 'tall lithe boyish-girl figure, admirably set off by her plain “Socialist” gown, with her short hair, and her large vivid eyes' (Briggs, 154); she could indeed be charming, flirtatious, and even imperious.

In 1896 Edith began to write up her memories of her schooldays for the Girls' Own Paper (October 1896 – September 1897); doing so stimulated her to write the earliest adventures of the Bastables, and their quest to restore their fallen family fortunes, as told in The Story of the Treasure-Seekers (1899). With the creation of Oswald Bastable, she knew that she had discovered a highly original way of writing about and for children, and from this point in her career she never looked back. She now invented the children's adventure story, more or less single-handed, adding to it fantasy, magic, time-travel, and a delightful vein of subversive comedy. The next ten years or so saw the publication of all her major work, and in the mean time she was also composing poems, plays, romantic novels, ghost stories, and tales of country life.

In 1899 the Bland family moved to Well Hall, a handsome eighteenth-century house at Eltham, where Edith wrote the rest of her children's books, though her progress was interrupted by the unexpected death of Fabian in the autumn of 1900, from what ought to have been a simple operation; she never entirely recovered from his loss. She was working on the further adventures of the Bastables, The Wouldbegoods (1901), and at the same time she had also begun writing a serial for the prestigious Strand Magazine about some children who find a sand-fairy (or 'psammead') at the bottom of a sand-pit in Kent (Five Children and It, 1902). The same children then hatch a phoenix egg on their nursery fire in The Phoenix and the Carpet (1904) and, after travelling the world on a magic carpet, they discover time-travel in The Story of the Amulet (1906). All these were first serialized in the Strand Magazine (where they were delightfully illustrated by H. R. Millar) and were then published in book form. In 1906 Nesbit finished her most popular (and sentimental) book, The Railway Children, the story of how Bobby, Peter, and Phyllis recover their lost father, who has been mistakenly arrested for spying (with an echo of the Dreyfus affair).

Nesbit also wrote many amusing fairy-stories, collected in The Book of Dragons (1899), Nine Unlikely Tales (1901), The Magic World (1912), and elsewhere. The Enchanted Castle came out in 1907, and was followed by two interlinked books about going back into English history—The House of Arden (1908), and Harding's Luck (1909), the story of a slum child. Her last major achievement was The Magic City (1910), a utopian fantasy in which Philip enters the miniature city he has made and becomes its saviour, with Lucy's help. The book begins with a miniature city built on a table top from a variety of everyday objects (upturned bowls, nursery bricks, chess pieces, cigarette papers, among other things), and in 1912 Nesbit was invited to build such a city for the Children's Welfare exhibition at Olympia, London. Out of that came Wings and the Child (1913), her reflections on the role of imagination in children's play—a book that admits that, at some level, she felt that she was 'only pretending to be grown-up' (Wings and the Child, 6). At heart she was still a child.

Despite their emotional ups and downs, Edith's political views were strongly coloured by Hubert's, and her books reflect both his socialism (her sense of what it might mean to be poor or a servant), and also his impatience with the suffragettes (mocked in the bossy Pretenderette in The Magic City): 'Votes for Women! Votes for children! Votes for dogs!', he would sneer. Hubert suffered from heart trouble and died unexpectedly on 14 April 1914. Despite their bohemian marriage, Edith was desolated, and lost much of her former energy. She struggled on at Well Hall during the early years of the First World War, taking in paying guests and undergoing a serious illness of her own (caused by a duodenal ulcer). In the summer of 1916 she met Thomas Terry Tucker, known as ‘the Skipper’ (1856/7–1935), a widowed marine engineer who asked her to marry him. Her older children disapproved—Tucker spoke with a broad cockney accent and never wore a collar—but she had been 'shivering in a sort of Arctic night', as she explained to her brother Harry (Briggs, 373), and accepted with delight. They were married on 20 February 1917 at St Peter's Roman Catholic Church, Woolwich, London (Edith had always been attracted to Catholicism, though she never adopted it completely). She particularly appreciated Tucker's single-minded devotion to her.

By now it was clear that Well Hall could no longer be kept up, so she and Tucker bought two former army huts at Jesson St Mary's on Romney Marsh, close to Dymchurch. They were immediately christened the Long Boat and the Jolly Boat, and are still there, though the handsome Well Hall has gone. Edith, a heavy smoker all her life, now fell ill. The ‘Duchess of Dymchurch’ (as she had sometimes been called) lay in her four-poster bed, looking across the marsh towards the 'little low hills of Kent' which she had always loved. She died on 4 May 1924 and was buried beneath a spreading elm in the quiet churchyard of St Mary's in the Marsh.

Nesbit's stories for the Strand Magazine were enormously and deservedly popular. They were much admired by other writers, including Rudyard Kipling and H. G. Wells, both of whom in turn influenced her. She was the first modern writer for children, and her reputation as a key contributor to the ‘golden age’ of children's literature (with James Barrie, Frances Hodgson Burnett, Kenneth Grahame, and Beatrix Potter) remains high. A very successful film of The Railway Children was released in 1970, and that book, Five Children and It, and The Phoenix and the Carpet have all been effectively adapted for television. Although Nesbit's humour is sometimes too sophisticated and literary for children of the early twenty-first century, her books have continued to delight new readers and to inspire imitations.