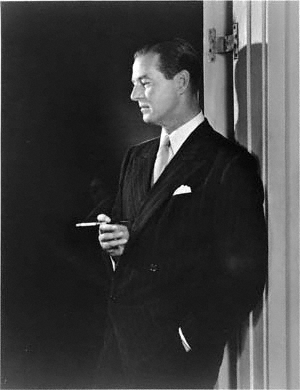 Rattigan, Sir Terence Mervyn (1911–1977), playwright, was born on 9 June 1911 at Cornwall Gardens, Kensington, London, the second son of (William) Frank Rattigan (1878–1952) and his wife, Vera Houston (1885–1971). His father's diplomatic career reached its zenith in 1922 on his appointment as acting high commissioner in Constantinople; shortly afterwards he was suspended, ostensibly after a clash with the foreign secretary, Lord Curzon, but in fact because of his liaison with Princess Elizabeth of Romania and her subsequent abortion. This event cast a pall over Rattigan's adolescence and rocked the family's finances. Later Rattigan was to adopt a more relaxed attitude to his father's philandering, making it the subject of one of his minor comedies, Who is Sylvia? (1950).

In a talk on the BBC Home Service in 1949, Rattigan spoke of the thrill of his first trip to the theatre, to see Cinderella, in terms which indicate not merely its hold on his seven-year-old imagination but its lasting effect on his work: 'The character had completely captured the audience's imagination, and mine with it, as no inanimate object like a theme or an idea or a moral could ever do' (Wansell, 19). He developed his literary ambitions when he joined his elder brother Brian at Sandroyd preparatory school near Cobham in Surrey in 1920, billing his precocious efforts as by 'the famous playwrite and author T. M. Rattigan' (Wansell, 80; the M for Mervyn being his own affectation). His passion for the theatre grew so great that, as he later explained to his arch-critic, Kenneth Tynan, when offered a choice between a beating and giving up a part in the school play, he opted for the former.

Rattigan won the seventh entrance scholarship to Harrow School in 1925 and enjoyed a distinguished school career, winning the English literature prize and the Bourchier prize for modern history. He followed in his father's footsteps by performing well in the cricket eleven. He honed his theatrical instincts by studying the work of Galsworthy, Barrie, and Shaw, and by writing his own short plays, including one at the behest of his French master, which received the now-celebrated assessment 'French execrable. Theatre sense first class' (Darlow and Hodson, 34). He also confirmed his own sexual tastes, nurtured in early fumblings at Sandroyd, by embarking, at the age of sixteen, on a serious affair with Geoffrey Gilbey, the racing correspondent of the Daily Express.

In 1930 Rattigan won a minor scholarship to Trinity College, Oxford, but his true alma mater turned out to be the Oxford University Dramatic Society (OUDS), where he met Frith Banbury and Peter Glenville, both to become distinguished directors of his post-war work; represented Treachery in a tableau of the Seven Deadly Sins opposite Angus Wilson's Buggery; and, most significantly, played a one-line part in John Gielgud's production of Romeo and Juliet, in which, as was then the custom, established West End actresses—here Peggy Ashcroft and Edith Evans—were imported to play the female roles. Gielgud was to prove a lifelong friend and inspiration to Rattigan. In 1934 they collaborated on a stage version of A Tale of Two Cities which, much to Rattigan's disappointment, was abandoned after an appeal by the veteran actor Sir John Martin-Harvey, who had been playing Sidney Carton on tour for forty-five years. Later Rattigan wrote two of his finest characters, the barnstorming barrister Sir Robert Morton in The Winslow Boy and the desiccated classicist Andrew Crocker-Harris in The Browning Version, for Gielgud (who declined both) and used the actor as a model for two others, Arthur Gosport in Harlequinade and Major Pollock in Separate Tables.

Rattigan left Oxford in 1933 without taking his degree as a deliberate snub to his father, who was pushing him towards a diplomatic career. His own sights were set on the theatre and his time at Oxford had provided him with the material both for his first performed play, the aptly titled First Episode, and his first great success, French Without Tears. First Episode, which enjoyed a brief West End run in 1934, was based partly on his own unrequited passion for his friend and collaborator Philip Heimann, and partly on his observation of the devastating effect that Peggy Ashcroft had had on her undergraduate colleagues during the OUDS Romeo and Juliet. It marks the first appearance of the romantic triangle which was to figure throughout his work.

French Without Tears, which was based on his time at a ‘crammers’ near Wimereux in France in preparation for his intended diplomatic career, opened at the Criterion in November 1936, with a cast of young hopefuls, including Rex Harrison and Trevor Howard. Reviews were mixed, with W. A. Darlington in the Daily Telegraph declaring that 'the gift of real lightness is a rare one in the theatre and Terence Rattigan is a lucky young man to have it' (Wansell, 80), while James Agate in the Sunday Times carped that 'this is not a play. It is not anything. It is nothing. It is not witty. It has no plot. It is almost without characterisation' (Wansell, 80). And yet it made Rattigan's name, ran for over a thousand performances, and its soufflé-light charm has held the stage ever since.

Rattigan's next two plays, Follow my Leader, a comic spoof of Nazism, initially banned by the lord chamberlain for fear of offending German sensibilities, on which he collaborated with his Harrow and Oxford friend Tony Goldschmidt, and After the Dance, a portrait of the cynicism and disillusionment of the post-First World War generation, were not successes. But in 1942 Flare Path, a study of fighter pilots and their wives and lovers, based on his own wartime experience in the Royal Air Force, and written while on active service as a flight lieutenant, restored his reputation with critics and public alike. He followed this with While the Sun Shines (1943), a light-hearted comedy in a Wodehousian vein which so charmed the previously hostile Agate that he described Rattigan in the terms which Shaw had used of Wilde as 'playing with everything: with wit, with philosophy, with drama, with actors and audience, with the whole theatre' (Wansell, 136). While the Sun Shines went on to beat Rattigan's own record and run for 1154 performances in the West End.

After the minor comedy Love in Idleness, most notable for the stellar presence of the Lunts, Rattigan wrote The Winslow Boy (1946), about a family's attempt to clear the name of a boy falsely accused of stealing a postal order, which was loosely based on the case involving George Archer Shee (1895–1914). He dedicated the play to 'Master Paul Channon', with whose father, Chips Channon, he was conducting a light-hearted affair. This was followed by Playbill (1948), a double bill comprising his masterpiece, The Browning Version, a study of a failed schoolmaster redeemed by an act of kindness, and Harlequinade, a portrait of a group of actors, which is now as dated as the theatre it celebrates. A rare failure in this decade of triumphs was Adventure Story (1949), a play about Alexander the Great, which Rattigan conceived in the strange belief that it was as necessary for an author to dramatize great historical figures as for an actor to attempt the classics. As with Ross (1960), his drama of Lawrence of Arabia, he reduced the protagonist to a Freudian case study and a subject which cried out for poetic treatment to middlebrow prose.

Rattigan returned to more familiar ground with his finest full-length play, The Deep Blue Sea (1952), an anatomy of a middle-class woman's passion for an airman who is both her junior and her emotional inferior, which was inspired by the suicide of his erstwhile lover Kenneth Morgan, and Separate Tables (1956), a poignant portrait of the emotional turmoil of a group of guests in a small private hotel. It was, by then, two decades since the success of French Without Tears, and Somerset Maugham's warning that a playwright could only expect to remain popular for twenty years was about to prove prophetic. The change of theatrical idiom brought about by Waiting for Godot (1955) and of theatrical taste brought about by Look Back in Anger (1956) were to topple Rattigan from his gilded perch.

Rattigan always championed the cause of the well-made play, provoking furious counterblasts from fellow dramatists James Bridie, Benn Levy, and Bernard Shaw, when in a 1950 New Statesman article he lauded the theatre of character over the theatre of ideas. But his most significant contribution to theatrical theory came in the preface to his second volume of Collected Plays (1953) with the creation of Aunt Edna, the personification of the 'nice, respectable, middle-class, middle-aged maiden lady', whom the theatre could not afford to offend. For many years Aunt Edna threatened to overshadow his subtler literary creations. Few playwrights have ever made a sharper rod for their own backs. To the Royal Court generation, Rattigan was regarded as providing genteel escapist fare for the middle classes, an impression confirmed by his first post-Osborne play, the feeble Variations on a Theme (1958), based partly on Margaret Leighton's relationship with Laurence Harvey, partly on his own experience of exploitative young men, and, largely, on Dumas's La dame aux camélias.

For most of the 1960s Rattigan devoted the bulk of his energies to film, a medium in which he had worked ever since 1936, when he became a contract writer for Warner Brothers. Many of his own plays were filmed: French Without Tears, The Deep Blue Sea, and A Bequest to the Nation proving unsuccessful, largely because of unsuitable casting, while The Browning Version, Separate Tables, and The Prince and the Showgirl have become classics. In the 1940s and 1950s he scripted many English films, often for the director Anthony Asquith and producer Anatole de Grunwald. But the Hollywood blockbusters of his later years, including The VIPs, The Yellow Rolls Royce, and the musical version of Goodbye Mr Chips, achieved more for his bank balance than for his art.

In the final years of his life Rattigan enjoyed something of a renaissance. His achievements were officially honoured with a knighthood in 1971 (he had been appointed CBE in 1958). His last three plays were: A Bequest to the Nation (1970) about Nelson and Lady Hamilton; In Praise of Love (1973), inspired by Rex Harrison's discovery that his wife Kay Kendall was dying of leukaemia; and Cause célèbre (1977), a dramatization of the Alma Rattenbury case, which mixed his favourite ingredients of unequal passion and middle-class repression. All enjoyed moderate success, while several of his earlier plays had triumphant revivals. By the time of his death from cancer in Bermuda on 30 November 1977, it was clear that much of his work would endure, and indeed it has dated far less than that of Osborne, which was said to have rendered it obsolete. Rattigan was cremated in Canada, and his ashes buried at Kensal Green cemetery, London.

Rattigan has claims to being considered the finest writer of short plays in the language. With the exception of The Deep Blue Sea, his greatest works (The Browning Version; the second part of Separate Tables; the original version of In Praise of Love) are all in one act. They will survive because of their unflinching portrayal of the folly, passion, and desperation of the human heart. Although Sebastian Cruttwell in In Praise of Love rails against 'le vice anglais', defining it as 'our refusal to admit our emotions', it was this code of reticence which turned out to be Rattigan's trump card. It gave him an objectivity as well as a subject. When he attempted to deal directly with homosexuality, it proved to be either redundant, as in the proposed revisions of Separate Tables for Broadway, or prurient, as in Man and Boy (1960). Elsewhere, as fellow playwright David Rudkin put it, 'I think Rattigan is not at all the commercial, middlebrow dramatist his image suggests but someone peculiarly haunting and oblique who certainly speaks to me with resonance of existential bleakness and irresoluble carnal solitude' (Darlow and Hodson, 15).