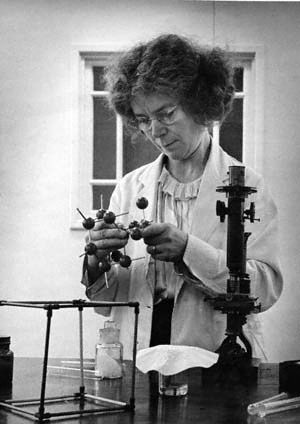 Lonsdale [née Yardley], Dame Kathleen (1903–1971), crystallographer and pacifist, was born Kathleen Yardley in Newbridge, Ireland, on 28 January 1903, the youngest child of Harry Frederick Yardley (d. 1923), the local postmaster, and his wife, Jessie Cameron. In 1908 Kathleen's mother, who had been brought up in north London, decided that the family should leave Ireland on account of increasing political uncertainty, and the family moved to Seven Kings, Essex. Kathleen attended Downshall elementary school from 1908 to 1914, and then won a scholarship to the Ilford County High School for Girls which she attended from 1914 to 1919. At the age of sixteen she won a place at Bedford College for Women in London. At college she changed her subject from mathematics to physics because she enjoyed the experimental aspects of physics and saw her future in experimental work rather than teaching. Having achieved the top place in the university BSc list in 1922 she was offered a research position at University College, London, by W. H. Bragg who had been one of the examiners on her course. In 1923 she, along with Astbury, Bernal, and others, accompanied Bragg when he moved to the Royal Institution, London. She began publishing in 1924, including a joint paper with Astbury, 'Tabulated data for the examination of the 230 space-groups by homogeneous X-rays' in the Royal Society's Philosophical Transactions.

In 1927 Kathleen married Thomas Jackson Lonsdale, whom she had met during her postgraduate study at University College. They then moved to Leeds, where he had a post in the Silk Research Association based in the textile department at Leeds University. They returned to London in 1929, after the birth of their first child, and in 1931 Kathleen Lonsdale took a position at the Royal Institution, where she remained until after the war. She returned to University College, London, in 1946, as reader in crystallography; in 1949 she was appointed professor of chemistry and head of the department of crystallography. According to Dorothy Hodgkin, herself a distinguished X-ray crystallographer, there was a sense in which Kathleen 'appeared to own the whole of crystallography in her time' (Hodgkin, 467). She greatly enjoyed day-to-day laboratory work, carrying out experiments and calculations herself when time permitted and noting technicians' contributions by sharing with them authorship of many published papers.

In Leeds Kathleen had worked on the structure of crystals of hexamethylbenzene, proving that carbon atoms in the benzene nucleus are coplanar and hexagonally arranged. At the Royal Institution during the 1930s she worked on magnetic anisotropy of crystals, particularly of aromatic compounds, for which she was in 1957 awarded the Davy medal of the Royal Institution. In the early 1940s she developed an interest in the thermal movement of atoms in crystals and her work on thermal vibrations strengthened her case for nomination for fellowship of the Royal Society which she achieved in 1945. She organized undergraduate and postgraduate lecture and practical courses at University College and built up a research school of her own. She became editor of the International Tables for X-Ray Crystallography in 1946 and despite this heavy workload continued her own research which included work on synthetic diamonds and on endemic bladder stones. The latter was a new departure for Kathleen in the 1960s, since it moved her research into the field of medical science and she continued the work after she retired in 1968.

Kathleen had been brought up as a strict fundamentalist Baptist, but this had always seemed at odds with her questioning, sceptical frame of mind. The Lonsdales became Quakers by convincement in 1935 and Kathleen saw her life as scientist, Quaker, and mother as inextricably linked. She gave the Eddington lecture in 1964 and described how the practice of science, of religion, and of child rearing should be founded on common themes of scepticism and of knowledge gained at first hand. She agreed with Eddington that Quakerism 'holds out a hand' to the scientist because it avoids the dogma of specific creeds, and relies on Friends' own experience. Kathleen felt that religion and science had much in common. For her, religious faith came from personal experience not from religious texts, and scientific knowledge was generated through experience and experiment. She stated that she believed that current scientific knowledge was probably true but kept an open mind with regard to new and better theories. However, she acknowledged that most scientists were in agreement, at least in part, because of similar training and education. For Kathleen, the upbringing of children should also mirror the questioning concepts of Quakerism: children should not be told what to believe but should be encouraged to find their own faith through personal experience. Likewise, Kathleen adhered to prevailing educational concepts which held that children should have the opportunity of learning by experience rather than learning by rote.

As a Quaker Kathleen believed in absolute pacifism and believed all war to be morally wrong. In the Swarthmore lecture of 1953 she talked at length regarding the causes of war and of her opinion of international affairs. She considered that no permanently armed nation could be free and that complete world disarmament was the only solution to international problems. Again, her inclusiveness of the personal and political, and association of family life with public life was clear. She considered that the same principles should apply in the home as in national and international affairs: as violence does not further peace in the home, neither would it in world politics. She was a firm believer in Gandhian non-violent resistance and in civil disobedience. During the Second World War she refused to register for civil defence and when she refused to pay the fine for this, was committed to Holloway prison for one month. Although she would have been exempt from civil defence duties, it seemed important to her that she should make the point as a conscientious objector. According to her husband the time spent in prison was the most formative experience of her life and she retained an interest in penal reform and became a member of the board of visitors at Aylesbury prison and Borstal institution in 1949.

Kathleen was always concerned about the ethical dimensions of science, especially with regard to the use of science in war. After the war she became vice-president of the Atomic Scientists Association and she was also president of the British section of the Women's International League for Peace and Freedom, originally formed during the First World War at The Hague. She attended meetings of the Pugwash movement, the scientists' anti-nuclear group, and was also a member of the east–west committee of the Society of Friends. Her peace and prison work were of great importance to Lonsdale and this emphasis was shared by her husband; in fact when he retired he took on some of the correspondence regarding this work.

Kathleen was one of the first two women to be elected to the Royal Society as fellows (the other being Marjory Stephenson). In 'Women in science: reminiscences and reflections' in Impact of Science on Society (1970) she attributed the scarcity of women in the top ranks of science to the lack of role models. She considered that both schools and parents had a role to play in encouraging more girls to take up the study of science and technology. In Kathleen's obituary in Biographical Memoirs of Fellows of the Royal Society Dorothy Hodgkin stated that when Kathleen wrote regarding women in science, she was, in fact, writing of her own life and her prescription for scientific success. Kathleen assumed that women wanted to marry and have a family life in addition to a fulfilling career. She considered that a woman should choose a husband with care; he should have the ability to share her problems, and domesticity would be a bonus. With regard to the woman herself, in order to be a first-class scientist one must be a good organizer, work twice the usual hours, and learn to concentrate in any available moment of time.

Kathleen worked extremely hard all her life; she travelled widely in association with her science, prison, and peace work, including trips to Europe, the United States, India, the Soviet Union, and the People's Republic of China. She was vice-president of the International Union of Crystallography from 1960 to 1966 and became the first woman president of the British Association in 1968. She was appointed DBE in 1956 and received honorary degrees from the universities of Wales, Leicester, Manchester, Lancaster, Oxford, Bath, Leeds, and Dundee.

In 1961, when Thomas Lonsdale retired, he and Kathleen moved to Bexhill, Sussex; she continued working in London, commuting five hours a day. Despite Kathleen's busy public life, there was always time for her three children and ten grandchildren, who were a source of great pride to her. She died in University College Hospital, London, on 1 April 1971.