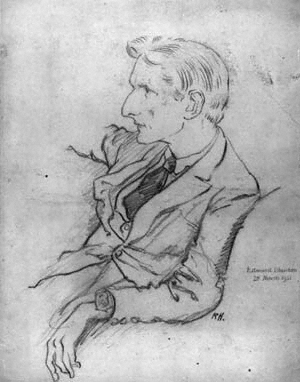 Blunden, Edmund Charles (1896–1974), poet and university teacher, was born on 1 November 1896 at 54A Tottenham Court Road, London, the eldest of the nine children (five sons and four daughters) of Charles Edmund Blunden (1871–1951) and his wife, Georgina Margaret (1868–1967), daughter of Henry Tyler and his wife, Georgina. Both parents were schoolteachers. When Edmund was four the family moved to Yalding in Kent, where he discovered the love of rural life and natural history that pervaded his whole career as a writer. He was a clever child with precocious literary tastes and ambitions. He attended Cleave's Grammar School in Yalding for two years and then in 1909 won a scholarship to Christ's Hospital, Horsham, Sussex, a public school which had been founded in the sixteenth century to provide an education for poor boys. Throughout his life Blunden was devoted to the school, and to the writers who had attended it, such as Charles Lamb, Leigh Hunt, and S. T. Coleridge. His final year there was overshadowed by the First World War.

In August 1915 Blunden was commissioned as a second lieutenant in the Royal Sussex regiment. Early in 1916 he was sent to Flanders, where he saw violent action in the trenches and on the battlefield and was awarded the Military Cross. Very much against the odds for a young infantry officer, Blunden survived nearly two years in the front line without a scratch. In mind and spirit, though, he was indelibly affected by the death and destruction he witnessed so early in his life. Blunden is remembered as one of the finest poets of the First World War, though many of his war poems were written afterwards, contemplating events in retrospect. He was affected not only by the loss of human life, including several of his friends, but by the brutal destruction of a countryside that, in its natural state, was very like the rural England that he loved. These memories haunted him and reappeared in his dreams and his poetry until the end of his life. 'When the events were not yet ended' (Blunden, Undertones of War, 1928, vii) Blunden wrote a prose account of his experiences, De bello germanico, but he was not satisfied with it. It was not published until 1930, and then only in a limited edition.

After returning to England in 1918 Blunden was serving at a camp in Suffolk when he met and married, on 1 June 1918, a young local woman, Mary Daines (1900–1957). He left the army in 1919 and launched himself on a literary career, meeting Siegfried Sassoon, who became a lifelong friend (and, on occasion, a source of financial support). The Blundens' first child, Joy, was born in July 1919, but died when only a few weeks old; Blunden grieved for her all his life. There were two more children of the marriage. While still at school Blunden had been awarded a scholarship to Oxford, and in October 1919 went up to Queen's College. He made friends among the aspiring writers in the university, many of them ex-servicemen like himself, but he found it hard to settle to academic work and in 1920 he left Oxford to take up a part-time editorial post at The Athenaeum, later incorporated in The Nation. In that year he published a collection of poems, The Waggoner, and co-edited the poems of John Clare, a countryman poet to whom he felt a great devotion. Blunden's next book of poems, The Shepherd, was awarded the Hawthornden prize, and he was recognized as a young writer of great promise. He was a fluent but thoughtful reviewer; his copious literary journalism reflected wide reading in the poets and prose writers of the Romantic era and their eighteenth-century antecedents. Despite his productive career as an editor, journalist, critic, and biographer, Blunden always regarded himself as essentially a poet, and a poet in the Romantic tradition. He was not influenced by the modernist literary revolution, but his poetry was admired by its adherents, such as T. S. Eliot. Blunden was a true nature poet, but in his work nature is menacing as well as consoling, as in such well-known poems as 'The Pike' and 'Midnight Skaters'. And his evocations of nature are often clouded by memories of war.

Sassoon, though ten years his senior, greatly admired Blunden; in 1922 he wrote in his diary that 'he brings with him his aura of enthusiasm for literature. He creates a special atmosphere which inspires me with certainty that I am a privileged person sharing the mysteries of the noble craft of letters' (Siegfried Sassoon Diaries, 161). Less reverentially, Sassoon wrote of Blunden 'perching' on a bed: 'he always reminds me of a bird' (ibid., 170). It was a widespread response to his small stature, sharp features, and rapid, darting movements (though when he was in the army his commanding officer referred to him as Rabbit).

Despite Blunden's growing fame, his poetry and literary journalism were not sufficiently lucrative to support a family. In 1924 he struck out on a new path by accepting the post of professor of English at the Imperial University of Tokyo. He came to love Japan, which brought him new friends and fresh subjects for poetry. While there he made another attempt at a prose account of his war experiences. The result was Undertones of War. Written without any documentation other than maps, it represents an extraordinary feat of memory and is Blunden's greatest contribution to the literature of war.

Blunden returned to England in 1927, and in 1928 Undertones was published. His wife had refused to accompany him to Japan, and the marriage ended in divorce in August 1931. Blunden resumed his connection with The Nation and was literary editor for a year; in 1931 he went back to Oxford as fellow and tutor in English literature at Merton College. On 5 July 1933 he married Sylva Norman (1901/2–1971), née Nahabedian, a young novelist and critic.

At Merton, Blunden was highly regarded as a tutor; his students included the famous Canadian critic Northrop Frye and the poet Keith Douglas, who was killed in action in 1944. During his years in Oxford, Blunden published several collections of poetry, and studies of Charles Lamb, the Keats circle, and Thomas Hardy. His Cricket Country (1944) reflects his abiding passion for the game. Eventually he came to feel restricted by academic life; he returned to full-time writing in 1944, and in the following year became assistant editor of the Times Literary Supplement. In May 1945 his second marriage, which was childless, was dissolved, and he married on 29 May 1945 Claire Margaret Poynting (1918–2000), a teacher, who had been one of his students; they had four daughters. Blunden's highly praised life of Shelley appeared in 1946, and in the following year he returned to Japan as a member of the United Kingdom liaison mission in Tokyo; he lectured widely on English literature and renewed some of his old acquaintance from the 1920s. Blunden was back in England from 1950 to 1953 and then accepted the post of professor of English literature at the University of Hong Kong. Here, as previously in Japan, he made many friends and admirers among his students.

Blunden retired in 1964 and settled in Suffolk, where he had lived in the 1920s; for almost the first time in his adult life he had a permanent home. His achievements were publicly recognized: he became a CBE in 1951, received the queen's gold medal for poetry in 1956, and in 1962 was made a companion of the Royal Society of Literature. In 1966 he was nominated for the Oxford professorship of poetry and reluctantly agreed to stand. Blunden was elected by a large majority over the other candidate, the American poet Robert Lowell (who warmly admired his work), but he found electioneering dispiriting. In the words of his biographer:

For his Oxford lectures Edmund clung to the familiar themes of Romantic poetry, war poets, and Thomas Hardy, but found it increasingly difficult to order his thoughts or even to engage in any sustained reading. His nervousness and fear of public failure brought him almost to a state of collapse.

After two years he resigned from the post because of ill health. He died of a heart attack at his home, Hall Mill, Long Melford, Suffolk, on 20 January 1974; he was buried at Holy Trinity Church, Long Melford, on 25 January 1974.