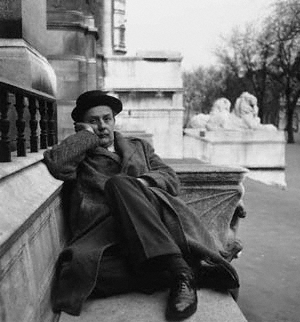 Betjeman, Sir John (1906–1984), poet, writer, and broadcaster, was born on 28 August 1906 at 52 Parliament Hill Mansions, north London, the only child of Ernest Edward Betjemann (1872–1934), a furniture manufacturer, and his wife, Mabel Bessie Dawson (1879–1952). The family name, of Dutch or German origin, can be traced back to an immigration in the late eighteenth century. The poet adopted his style of it about the age of twenty-one.

Betjeman attended Byron House Montessori School, Highgate, and Highgate junior school, where he was taught by T. S. Eliot. In 1917 Betjeman boarded at the Dragon School, Oxford, and then unhappily at Marlborough College, and was active at both in school theatricals and in various forms of writing. He later recalled with affection, however, the influence of two Marlborough school masters: George Gidney and Clifford Canning, who 'made us aware that being good at games was not all' (Betjeman: Letters, 2.333). Betjeman entered Magdalen College, Oxford, in 1925 but was rusticated three years later after failing in divinity. To his father's deep disappointment he declined to enter the family business, becoming successively a preparatory school master (at Thorpe House School, Gerrard's Cross, and at Heddon Court, Cockfosters, Hertfordshire), private secretary to Sir Horace Plunkett, assistant editor of the Architectural Review in 1930, and film critic of the London Evening Standard in 1933. On 29 July 1933 he married Penelope Valentine Hester Chetwode (1910–1986), daughter of Field-Marshal Sir Philip Walhouse Chetwode, first Baron Chetwode (1869–1950), commander-in-chief in India at the time. They then moved to Garrard's Farm in Uffington, in the Vale of the White Horse, Berkshire, where his wife, who later trekked in the Himalayas, was able to keep horses. Their son Paul was born there in 1937.

Betjeman's first two collections of poems, Mount Zion (1931) and Continual Dew (1937), showed a poet already fully formed, with the impeccable ear, delight in skill, and assured mastery of a wide range of tones and themes that so distinguished all his subsequent work in verse. In these early volumes, as later, Betjeman moved with perfect assurance from light pieces, vers de société, satirical sketches of muscular padres or philistine businessmen (as in the famously ferocious tirade 'Slough') to sombre reflections on the impermanence of all human things. In a remarkable variety of metres and manners the poems make an equally clear-cut impression on the reader, never drifting into obscurity and never influenced by the modernists. Here too he gave glimpses of the world of gas-lit Victorian churches and railway stations, of grim provincial cities and leafy suburbs that he was to make his own, not forgetting the grimmer contemporary developments, shopping arcades, and bogus Tudor bars that he saw effacing it and strove to resist.

These concerns are reflected in Betjeman's Ghastly Good Taste (1933), subtitled 'a depressing story of the rise and fall of English architecture', which attracted more immediate attention than either of his first books of poems. In it he attacked not only modern or modernistic trends but also the other extreme of unthinking antiquarianism; nor had he any time for the safely conventional. While still at school he had become interested in Victorian architecture, thoroughly unmodish as it was at the time. His writings on the subject, by reviving appreciation of the buildings of that era, prepared the ground for the Victorian Society's successful foundation in 1958. Further afield, he showed among other things his fondness for provincial architecture in his contributions to the Shell series of English county guides, of which the most notable is that on Cornwall, another enthusiasm acquired in boyhood. He had joined the publicity department of Shell in the mid-1930s. In 1937 Betjeman became a devoted member of the Church of England, speaking of it as 'the only salvation against progress and Fascists on the one side and Marxists of Bloomsbury on the other' (Betjeman: Letters, 1.171). His devotion to the church lay not only in his open admiration for its buildings, its liturgy, and its worshippers, but for its faith.

In the Second World War Betjeman volunteered for the RAF but was rejected and joined the films division of the Ministry of Information. He then became Britain's press attaché to the high commission in Dublin (1941–3), where his daughter Candida (1942–2014) was born. Betjeman's official job in neutral Ireland was to sway public opinion in favour of the British, and as part of this strategy he arranged for the battle scenes of Laurence Olivier's Henry V (1944) to be filmed in Ireland (this depicted a heroic England massively outnumbered by its European enemies). He wrote regular reports on Irish politics based on high-level contacts within the Irish government, and factions within the Irish Republican Army (IRA). One IRA battalion planned to assassinate Betjeman, but the operation was called off because the IRA's head of civilian intelligence liked his poetry. Betjeman subsequently worked in P branch (a secret department) in the Admiralty at Bath.

In 1945 Betjeman moved to Farnborough, and in 1951 to Wantage, where his wife opened a tea-shop, King Alfred's Kitchen. Betjeman's poetical career began to flourish with the appearance in 1940 of Old Lights for New Chancels and continued with New Bats in Old Belfries (1945) and A Few Late Chrysanthemums (1954). Many of the poems in these three volumes became classics of their time, including 'Pot Pourri from a Surrey Garden', 'A Subaltern's Love-Song', and 'How to get on in Society'. His Collected Poems came out in 1958 and went through many impressions. Summoned by Bells is dated 1960, a blank-verse poem of some 2000 lines that gives an account of his early life up to schoolmastering days with characteristic animation, humour, sadness, and abundance of detail.

Both these volumes were widely successful, the first edition of the Collected Poems selling over 100,000 copies. Betjeman's poetry enjoyed a popularity not seen since the days of Rudyard Kipling and A. E. Housman. No doubt it was poems like the three mentioned above and the more obviously quaint period pieces that made an immediate appeal. Nor should one underestimate the sheer relief and delight that was felt at the appearance of modern poetry that was easy to follow and yielded the seemingly almost forgotten pleasures of rhyme and metre expertly handled. Nevertheless it may not be instantly obvious how so strongly personal a poet, one given moreover to evoking unfamiliar characters and places, should have proved so welcome.

The answer must lie in the closeness of the concerns of Betjeman's poetry to the ordinary day-to-day experience of his readers, also something rarely found in the work of his contemporaries. For all the delight in the past, it is the past as seen from and against the present; for all the cherished eccentricities—hardly repugnant as such to British taste anyway—the subject is ourselves and our own world. The point was well made by Philip Larkin, the friend and admirer who best understood his work:

He offers us something we cannot find in any other writer—a gaiety, a sense of the ridiculous, an affection for human beings and how and where they live, a vivid and vivacious portrait of mid-twentieth-century English social life.

From 1951 Betjeman's marriage was troubled: his wife's conversion to Roman Catholicism in June 1949 had upset him greatly, and although he eventually became reconciled to her decision, they reached a joint decision to separate amicably. As Betjeman put it quite simply later: 'I love her. But I cannot live with her for long without quarrelling' (Betjeman: Letters, 2.473). He met Lady Elizabeth Georgina Alice Cavendish (1926–2018), sister of the duke of Devonshire, and lady-in-waiting to Princess Margaret, at a dinner party in 1951, and they embarked on a friendship that soon became a love affair. The relationship lasted until his death.

By the mid-1950s Betjeman's main income came from book reviewing, broadcasting, and his poems. He pursued a highly successful career as a broadcaster, and—with the help of the image he projected through television, engaging, diffident, exuberant, often launched on some architectural or decorative enthusiasm—he became a celebrated and much-loved figure in national life. He used this position zealously to defend many buildings threatened with demolition. He was able to save many of these, from St Pancras Station to Sweeting's fish restaurant in the City of London, although the Euston Arch was lost despite his vigorous campaign. Appropriately, it was at St Pancras, naming a British Rail locomotive after himself, that he made his last public appearance on 24 June 1983. A statue of the poet was unveiled at the station in November 2007.

In later years Betjeman continued his work in poetry, publishing High and Low in 1966 and A Nip in the Air in 1974. The contents of these two volumes reveal no loss of energy; indeed, poems like 'On Leaving Wantage, 1972' embody a melancholy, even a tragic, power he had never surpassed. All the same, apart from the ebulliently satirical 'Executive', almost none of them have achieved much individual popularity. They were incorporated entire in the fourth edition of the Collected Poems in 1979. Those in Uncollected Poems (1982) were such as the poet was content should remain in that state and are unlikely to gain him many new readers, though lovers of his work would not be without any of them. Expressions of doubt and the fear of old age and death are strong and memorable in his poetry, but ‘Church of England thoughts’ are pervasive too, and one of its chief attractions, seldom given proper weight, has been the sense of an undemonstrative but deep Christian belief of a kind that could contain the harsh, ugly, absurd realities of present-day existence.

John Betjeman was a sociable man, one who loved company and valued it the more for being also shy. Although renowned for his youthful gregariousness and endlessly affable with all manner of people, his was a life rich in intimacy. Latterly he was partial to small gatherings, old friends, and a sufficiency of wine. His expression in repose was timid, perhaps not altogether at ease, and even at the best of times it was possible to surprise on his face a look of great dejection. But all this was blown away in an instant by laughter of a totality that warmed all who knew him. His presence, like his work in verse and prose, was full of the enjoyment he felt and gave.

Betjeman was chosen as poet laureate to universal acclaim in 1972. He received many distinctions besides, being awarded the Duff Cooper memorial prize, the Foyle poetry prize, and in 1960 the queen's medal for poetry. In that year too he was appointed CBE. In 1968 he was elected a companion of literature by the Royal Society of Literature, and in 1969 he was knighted. He was an honorary fellow of his old college, Magdalen (1975), and also of Keble College, Oxford (1972). He had honorary degrees from Oxford, Reading, Birmingham, Exeter, City University, Liverpool, Hull, and Trinity College, Dublin. He was also honorary associate of the Royal Institute of British Architects.

From the mid-1970s Betjeman had suffered increasingly from the onset of Parkinson's disease and after a series of strokes he died at Treen, his home in Daymer Lane, Trebetherick, Cornwall, on 19 May 1984. He was buried on 22 May in nearby St Enodoc churchyard, and a memorial service was held at Westminster Abbey on 29 June 1984. To his daughter Candida Lycett-Green he bequeathed his impressive library of 5000 volumes, the product of a lifetime's intelligent and discerning book collecting.