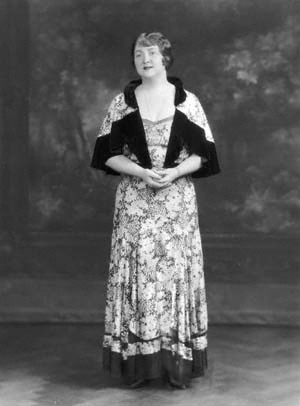 Baillie, Dame Isobel [real name Isabella Douglas Baillie] (1895–1983), singer, was born on 9 March 1895 at 2 Princes Street, Wilton, in the border town of Hawick, Roxburghshire, Scotland, the youngest in a family of a son and three daughters of Martin Pott Baillie (1860-1904), a master baker, and his wife, Isabella Hetherington née Douglas (1865-1936). She was baptized Isabella Douglas and known as Bella. The family moved to Newcastle upon Tyne when she was five. Not long afterwards they moved to Manchester, where Bella attended the board school in Princess Road. There her voice was noticed when she sang a verse of a hymn as a solo. She had always enjoyed singing at home but had received no tuition until her headmaster encouraged her. She won a scholarship to Manchester high school, where music was a low priority.

Bella left school at fifteen to work in a music shop in Fountain Street, Manchester, where she was put in charge of the piano roll department. After that she worked in the gas department of Manchester town hall. At this period the headmaster at the board school persuaded Bella's mother to let her study singing seriously. She went once a week to Jean Sadler-Fogg, a former pupil of Blanche Marchesi and the wife of the Hallé Orchestra's organist Charles Fogg and mother of the composer Eric Fogg. Mrs Sadler-Fogg took her pupil to sing to Marchesi, whose only remembered comment was 'That F could be better'. Bella was unable to pay Mrs Sadler-Fogg's fees, but paid her back when she began to get engagements. At fifteen she sang in her first performance of Handel's Messiah in a church in Stretford. Gradually she was invited to sing in churches and church halls throughout Lancashire and in parts of Yorkshire.

On 31 December 1917 Bella married Henry (Harry) Leonard Wrigley (1891–1957), a cotton trader; he was the son of Robert Wrigley, draper’s assistant, and his wife Mary Elizabeth. They had met before 1914 at a local concert where she sang and he recited The Green Eye of the Little Yellow God, the popular ballad by John Milton Hayes. At the time of their marriage he was on sick leave from France. Two days after the wedding he returned to the trenches, where he was wounded at Ypres. Their daughter Nancy was born in December 1918. Shortly afterwards Bella calculated that her earnings from singing exceeded her town hall salary, so she decided to devote all her time to singing. One of her first professional engagements in 1920 was in a popular ballad concert broadcast from Manchester's first local radio station in Trafford Park, before the BBC was founded. She also wrote, asking for an audition, to Hamilton Harty, who had in 1920 been appointed conductor of the Hallé Orchestra. Harty interviewed her, having already heard her sing in songs by Eric Fogg at a recital, and engaged her to sing the wordless soprano part in Alfredo Casella's symphonic suite The Venetian Convent at a Hallé concert in the Free Trade Hall, Manchester, on 17 November 1921. Harty then engaged her for Haydn's The Creation and for a performance of Messiah, the first time Handel's oratorio was broadcast. She became indelibly associated with Messiah. Baillie reckoned she had sung in it over a thousand times—on thirty-three occasions with the Royal Choral Society in London and nearly thirty times with the Hallé. Her 'I know that my redeemer liveth' was justly admired for its serenity and purity, but equally memorable were her declamation of the Christmas music and the crystalline clarity of her 'Rejoice greatly'. Only once, for John Tobin, did she add ornamentation to the vocal line, but she strongly disapproved of this later fashionable practice, considering that it detracted from both the flow of the vocal line and the devotional meaning of the text.

Harty advised her to sing as Isobel Baillie, saying that Bella Baillie led people to expect 'a music hall or musical comedy artist'. He also advised her to study in the summers of 1925 and 1926 with Guglielmo Sommer in Milan; but before that she had been engaged by Sir Henry Wood for six Promenade Concerts in the Queen's Hall in 1923, her London début. One of them was a Wagner night shared with Lauritz Melchior when he was still a baritone. Although she was principally associated with oratorio, to which her light silvery tone and superb clarity of enunciation were ideally suited, she also sang arias by Mozart and Micaela's arias from Bizet's Carmen and, with Wood conducting, sang Elsa in a concert performance of Wagner's Lohengrin in Leicester. Her participation in Wagner aroused the displeasure of Harty, who, in a letter written in 1928 after she had sung in the closing scene of Götterdämmerung, remonstrated with her that 'in music of this type you are quite out of the picture and merely a source of gratification to your enemies' (Baillie, 29). Nevertheless, he later engaged her for a Wagner concert in Bradford and to sing in the Meistersinger quintet. On 24 January 1938, on the insistence of Hyam Greenbaum, she sang Isolde, with Walter Widdop as Tristan, in two performances of act II that were televised (afternoon and evening) from Alexandra Palace. She wrote in her autobiography, 'I was far from being a natural Isolde but I enjoyed every minute of the adventure' (ibid., 115).

Isobel Baillie's only operatic appearance in Britain was at Covent Garden in the coronation season of 1937, when the 1774 Paris version of Gluck's Orphée was conducted by Fritz Reiner. But she did not step on the stage. She sang one aria during the ballet from the orchestra pit. She sang Marguerite in many concert performances of Gounod's Faust throughout Britain, but in 1940, on a tour of New Zealand, she sang the role on stage in sixteen performances. In 1929, with the tenor Francis Russell, she recorded the act I love duet from Puccini's Madama Butterfly.

The core of Isobel Baillie's career was in Britain between 1920 and 1974, the year she made her last recording to mark her forthcoming eightieth birthday. She first sang at the Three Choirs festival in 1929 at Worcester (Messiah) and performed at eighteen of these festivals thereafter, and sang under Elgar's baton in his For the Fallen at Worcester in 1932 and in The Apostles and The Kingdom elsewhere. On 6 September 1950 she sang in the first performance of Herbert Howells's Hymnus paradisi at Gloucester. Other British composers with whose music she was associated included Sir George Dyson, in the first performance of whose The Canterbury Pilgrims she sang the Wife of Bath on 19 March 1931, Gerald Finzi (whose Dies natalis was the only work she sang with Sir John Barbirolli's Hallé), and Harty. She frequently sang Harty's Ode to a Nightingale, and gave the first performance of his The Children of Lir in London on 1 March 1939. She was a regular soloist at the Leith Hill Festival at Dorking, conducted by Ralph Vaughan Williams, and sang in his works at the Three Choirs festival; she was also one of the sixteen soloists for whom he wrote his Serenade to Music, given in Sir Henry Wood's golden jubilee concert at the Royal Albert Hall on 5 October 1938. It was recorded a few days later, thereby preserving her marvellous ascent to top A on the words 'sweet harmony'. Her last major recording was in Vaughan Williams's A Sea Symphony in 1953, ending (apart from the 1974 disc) a career in the studios extending from a test recording made on 19 February 1924.

Isobel Baillie's repertory was wider than was often supposed, including many works by J. S. Bach, Berlioz, Brahms, Dvořák, Gurney, Kodály, Mendelssohn, Rakhmaninov (The Bells as well as songs), Schubert, Schumann, Strauss, Szymanowski, Tchaikovsky, and Wolf. In addition she sang a vast number of popular ballads. On 27 July 1933 she was the first British artist to sing at the Hollywood Bowl, in a concert conducted by Harty. This was her American début. In the autumn of 1937 she sang in London in Brahms's German Requiem and Beethoven's ninth symphony conducted by Arturo Toscanini.

During the Second World War Isobel Baillie sang for the Entertainments National Service Association in military bases, camps, and factory canteens. In December 1941 she performed with Kathleen Ferrier for the first time, in Messiah at Lytham St Anne's. She was the soprano in Messiah in Westminster Abbey in May 1943 when Ferrier made her legendary first London appearance. They became good friends and recorded duets by Purcell and Mendelssohn.

After the war Isobel Baillie went back to New Zealand in 1948 for recitals, returning home via Singapore, Kuala Lumpur, and Penang, in all of which she gave recitals. She sang in the cathedral at Washington, DC, in 1949 and toured South Africa (after flying there in the Comet) in 1953. After her virtual retirement in 1955 she gave lecture recitals and master classes throughout the world. She had begun to teach at the Royal College of Music in 1952 on the invitation of its director, Sir George Dyson; he then persuaded her to join the permanent teaching staff, of which she was a member from 1955 to 1957. In 1960–61 she was visiting professor of singing in the department of music at Cornell University, and on her return to England was asked by Sir Keith Falkner, with whom she had often sung and who was now director of the Royal College of Music, to rejoin the college staff; she remained for three years from 1961 to 1964. She also taught for many years at the Manchester School of Music in Albert Square, run by John Grierson, one of her regular accompanists. She returned to Cornell in 1980 at eighty-five to lecture with, it was said, 'very impressive vocal examples'. In 1982 she published her autobiography, Never Sing Louder than Lovely, valuable for its details about the singing of Messiah and for vivid pen-portraits of her colleagues. It ends with the words 'It has been a wonderful life and I would do it all again' (Baillie, 145). She attracted audiences not only by the beauty of her voice, with its secure technique and impeccable diction, but also by her friendly personality and her red-gold hair and lovely complexion. She personified the best in British oratorio singing. She was appointed CBE in 1951 and DBE in 1978.

After Isobel Baillie's husband retired from the cotton trade in 1945 the couple moved from their cottage in Silecroft, in the Breast of Blackcombe, above Barrow in Furness, to Trimmings, Gracious Street, Selborne, Hampshire. He died in 1957. Baillie later lived in St John's Wood, London, before returning to Manchester, where she died from heart failure at the Withington Hospital on 24 September 1983.