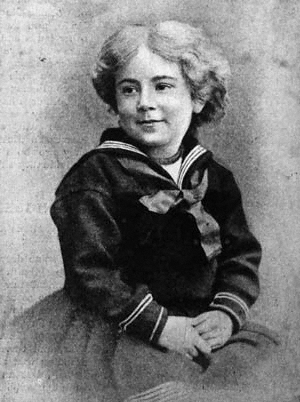 Ashford [married name Devlin], Margaret Mary Julia [Daisy] (1881–1972), child writer, was born on 7 April 1881 at Elm Lodge, Petersham, Surrey, the eldest of the three daughters of William Henry Roxburghe Ashford (1836–1912), a former official of the War Office, and his wife, Emma Georgina (1842–1917), daughter of George Walker, an industrialist of Eastwood, Nottinghamshire. Daisy was the sixth child of her mother, who was previously married to Henry Langley (d. c.1879), a cornet in the 11th hussars, with whom she had eloped and with whom she had two daughters and three sons while living in Ireland. Daisy was brought up in a cheerful and affectionate family atmosphere in which all the children were encouraged to write. She was largely educated at home except for one year attending a convent at Haywards Heath, the Priory of Our Lady of Good Counsel, at the age of seventeen. By this time she had long since completed The Young Visiters, the work by which she is remembered.

Daisy Ashford dictated her first work to her father at the age of four. 'The Life of Father McSwiney', a 4000-word fictitious biography of a Jesuit priest, reflected the ethos of a family strongly influenced by the beliefs and practices of the Roman Catholic church. In 1889 the Ashfords moved from Petersham to Southdown House, Lewes. There she dictated two romances, 'A Short Story of Love and Marriage' (1889) and 'Mr. Chapmer's Bride', now lost. She then embarked on the first book written in her own hand, the story of an aspirant to high society in late Victorian England. The Young Visiters, or, Mr. Salteena's Plan combines the characteristics which mark all Daisy Ashford's work: acute observation (of food and clothes as well as people), a gift for narrative, unconscious humour, and poor spelling. This was followed by a play, A Woman's Crime (not extant), and two stories, 'The True History of Leslie Woodcock' (1892) and 'Where Love Lies Deepest' (1893). In the latter the darker side of life predominates, as it does in 'The Hangman's Daughter' (1894–5). This was her longest story and the one which in later life she considered to be 'the greatest literary achievement' of her youth. In 1898 she went to school and the hope she had nourished when writing 'The Hangman's Daughter' of 'becoming an authoress' evaporated.

When she left school Daisy Ashford returned home to five years of leisure. In 1904 the family moved to Bexhill and soon afterwards she followed her sister Vera, an art student, to London, where she worked as a secretary. Later she ran a canteen in Dover as part of the war effort. After her mother's death in 1917, she and her sisters were sorting out her papers, and they came across a box containing their childhood writings. The Young Visiters was soon identified as the funniest of these. In the following year Daisy lent the manuscript to her friend Margaret Mackenzie, who showed it to Frank Swinnerton, a reader and editor at the publishers Chatto and Windus. It was while working at the British legation in Bern that Daisy learned that Chatto wanted to publish her book. The Young Visiters appeared, with a preface by J. M. Barrie, on 22 May 1919. Although some reviewers questioned its authenticity, most—among them A. A. Milne and Robert Graves—were delighted with it.

The book was an immediate commercial success. It was reprinted eighteen times in the year of publication and also found success in America where sales were enhanced by the widespread though unfounded belief that Barrie himself had written the story. It was dramatized by Margaret and Susy Mackenzie in 1920, made into a musical in 1968, and into a film in 1984. Illustrated editions appeared in 1949 and 1984.

Daisy Ashford, a shy and unworldly person, was touched but astonished by her new-found fame. She explained her feelings in the preface she wrote for Daisy Ashford: her Book (1920): 'I can never feel all the nice things that have been said about “The Young Visiters”, are really due to me at all, but to a Daisy Ashford of so long ago that she seems almost another person'. Daisy Ashford: her Book contained 'The Hangman's Daughter' and three others of her stories, as well as one by her sister Angela, 'The Jealous Governes'.

In January 1920 Daisy married James Devlin (d. 1956), whom she had met while working at a Catholic soldiers' club in Bexhill. They had two daughters and two sons, the elder of whom died in 1955. For some years they farmed cut flowers at Framingham Pigot, near Norwich, and then for a year they ran the King's Arms Hotel, Reepham. In 1939 they settled at Hellesdon, Norwich. Daisy Ashford returned to writing in old age, beginning an autobiography. She later burned the entire manuscript in a fit of spring cleaning. She died on 15 January 1972 in Hellesdon. In 1983 some of her early stories were reprinted in ‘The Hangman's Daughter’ and other Stories, in which 'The Life of Father McSwiney' was published for the first time.