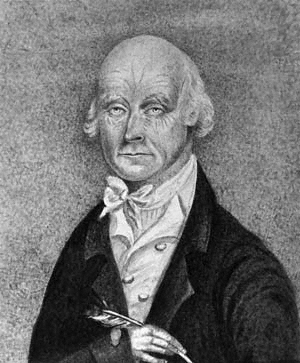 Tytler, James [called Balloon Tytler] (1745–1804), balloonist and radical, was born on 17 December 1745 at the manse at Fern, Forfarshire, the fourth child of George Tytler (1705/6–1785), Church of Scotland minister in the presbytery of Brechin, and his wife, Janet Robertson (d. 1795). His younger brother Henry William Tytler was a noted physician and translator. He was educated at the local parish school and possibly at Aberdeen University, which he claimed to have left before the age of fifteen. Tytler was then apprenticed to a Mr Ogilvie, a Forfar surgeon, before in 1763 he entered Edinburgh University, where he studied under William Cullen, from whom he gained a lifelong interest in experimental chemistry. Funds for his education were raised by work as a surgeon on a whaling ship, the Royal Bounty, in which he sailed to Greenland in mid-1765. On his return Tytler became involved with members of the Glasite religious sect, through which he met Elizabeth, daughter of James Rattray, writer to the signet, whom he married some time after 27 October 1765; the couple had five sons.

Tytler now began the first of several periods of piecemeal work, financial hardship, and exile in Newcastle upon Tyne to escape the debtors' prison. In 1772 the family returned to Edinburgh, where Tytler bolstered his meagre income as an apothecary with a series of small-scale publishing ventures, beginning in January 1774 with the short-lived Gentleman and Lady's Magazine. Later that year he published two works on theology which revealed his antipathy to Humean scepticism and religious factionalism, a conviction that now prompted his break with the Glasites. More significant than the content of these works was the fact that Tytler produced both on a home-made printing press, evidence of the innovation and resourcefulness that he brought to many of his scientific and (often unsuccessful) money-making schemes over the next three decades. About this time his wife, Elizabeth, left to establish herself as a grocer in the Canongate area of the city. The couple were divorced in 1788, by when Tytler had been involved in two further relationships; the first was with the sister of John Cairns, a local butcher; the second, after her death in or before 1782, was with Jean Aitkenhead (1739/40–1834), with whom he had two children and lived for the rest of his life.

In 1776, through his new literary connections, Tytler was appointed editor of the second edition of Andrew Bell's and Colin Macfarquhar's Encyclopaedia Britannica. Under Tytler's editorship the collection was enlarged from three to ten volumes (many of the new entries being written by Tytler) and published between 1777 and 1784. Though steady work, the editorship was not well paid. Tytler and his family now lodged at Duddingston near Edinburgh in the home of a washerwoman on whose upturned tub Tytler composed hundreds of encyclopaedia articles. His talent for abridgement coupled with his ongoing penury prompted further publishing schemes in these years, notably a reduced version of the twenty-volume Universal History as the General History of All Nations, Ancient and Modern (only one volume of which appeared in twenty-nine issues) and a self-printed translation of Virgil's Eclogues (1781–2).

Tytler's enterprise next found expression in the balloon mania which swept Britain following the Montgolfier brothers' successful flight at Versailles in September 1783. Though now virtually unknown in the history of ballooning, Tytler was the first Briton to make a successful ascent (at 5 a.m. on 27 August 1784), predating by several weeks the flights of the Italian Vincenzo Lunardi in London and the first English aeronaut, James Sadler from Oxford. Tytler's obscurity undoubtedly owes much to the mixed fortunes he enjoyed during his four attempts at manned flight, the relatively short ground distance covered, and the bathetic conclusion of his much-publicized final flight (11 October 1784), when his balloon crashed before hundreds of paying spectators at Edinburgh's Comely Gardens. Nevertheless, by this date Tytler had twice left the ground in a craft of his own design and construction, becoming on 27 August, as the Edinburgh Advertiser reported next day, the 'first person in Great Britain to have navigated the air' when at a height of 350 feet he flew for half a mile across the city (Fergusson, 77). But what little coverage Tytler received in August was soon forgotten following Sadler's landmark flight on 4 October (over 6 miles at 3600 feet) and the triumphant display given by Lunardi on a visit to Edinburgh a year later. Subsequent discussions of ballooning in the Scots Magazine (November 1805) made no reference to Tytler, though his achievement was recognized in Lunardi's Account of Five Aerial Voyages in Scotland (1786).

After his brief career as an aeronaut Tytler returned to a life of hack-journalism, scientific invention, and debt. In 1788 he fled again to England, after which there is no record of his movements until he returned to Edinburgh three years later to begin his final periodical, the Historical Register (last edition July 1792). Born perhaps of his long-running belief in religious liberty or a sense of injustice surrounding his literary and scientific career, Tytler now became increasingly interested in the radical cause in Scotland. In 1792 he joined the Society of the Friends of the People, a constitutional reform society to promote non-violent opposition to Pitt's administration. However, his hostility to the ministry's actions, notably its proclamation against seditious writings, led him to advocate more extreme political reform and to make personal attacks on leading personalities such as the lord advocate, Robert Dundas. In November 1792 Tytler fell foul of the targets of his abuse after his essay 'To the people and their friends' had denounced the House of Commons as a 'vile junto of aristocrats', and had called on readers to petition George III to replace existing MPs with representatives of 'good understanding and character' and to withhold paying their taxes should the demand be ignored (Fergusson, 125–6). Tytler was arrested and charged with seditious libel on 4 December 1792, the first person in Edinburgh to be detained as part of the government's crackdown on Scotland's radical societies. Faced with a court appearance in the new year, Tytler left the city for Belfast; there he was joined by Jean Aitkenhead, and from there he published pamphlets attacking Thomas Paine's deism.

Tytler's final years were spent in Salem, Massachusetts, where he emigrated with his family in 1795. Here, at Cat Cove near Salem Neck, he eked out a living through journalism and literary compilations such as his poorly received Treatise on the Plague and Yellow Fever (1799). Disappointment led increasingly to drink, and it was when inebriated that he fell and drowned near his home on 9 January 1804. His body was discovered and buried two days later at the East Meeting-House, Salem.