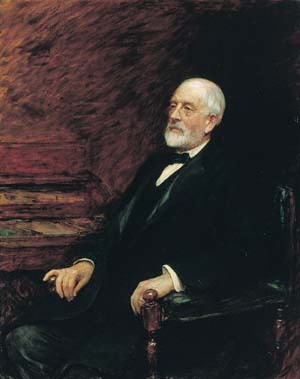 Tate, Sir Henry, first baronet (1819–1899), sugar refiner and benefactor, was born at Chorley in Lancashire on 11 March 1819, the eleventh child of the Revd William Tate (1773–1836), and his wife, Agnes, daughter of Nathaniel Booth of Gildestone, Yorkshire. Tate's parents had twelve children in all, four having died before Henry's birth. To eke out a living as a Unitarian minister, William Tate opened a private school for poor children. It was here that Henry received his only formal education. At the age of thirteen he was apprenticed to one of his older brothers, Caleb Ashworth Tate (d. 1846), who was a grocer in Liverpool. Seven years later Henry set up on his own, by buying the business of Aaron Wedgwood in Old Haymarket, Liverpool. By the time he was thirty-six, Henry Tate had six shops—four in Liverpool, one in Birkenhead, and one in Ormskirk. He also expanded into the wholesale trade in 1857.

Tate began a more significant commercial diversification in 1859, when he went into partnership with John Wright, a cane sugar refiner of Manesty Lane, Liverpool. This proved sufficiently successful for Tate to sell the six shops in 1861, and for the partners to establish their own refinery in the following year. A second refinery was built in 1864. Five years later Wright withdrew, and the company changed its name to Henry Tate & Sons. The subsequent years were difficult for British refiners, as imports of refined beet sugar, supported by state subsidies, entered the market from continental Europe, particularly Germany. Several businesses in Britain went bankrupt. Tate and other cane sugar refiners argued for some form of protection from such subsidized imports, but the chief response of his and other successful companies was to innovate and expand to meet competition.

In 1870 Tate built a new refinery in Love Lane, Liverpool. Here he incorporated the so-called ‘Greenock method’ of refining (Greenock then being one of the centres of refining), which included boiling the sugar in a partial vacuum, and at a low temperature, to reduce caramelizing. The refinery began operating in 1872, but before it did so Tate was introduced to another new method, developed in France by Bovin and Loiseau, using lime and carbonic acid to purify the sugar. Tate bought the rights to this, and introduced it to Love Lane. Much of Tate's commercial success was based on his ability to recognize an opportunity, and to his judgement in introducing new technologies from elsewhere. This was illustrated again in 1874–5, when he bought a derelict shipyard on the Thames at Silvertown. It was to be the site of his largest refinery, which began operating in 1878, under the control of his son, Edwin. The construction of a new refinery represented a significant risk for the company; the costs were such that Tate was forced to withdraw his daughter, Isolina, from boarding-school.

At the time of the move to London, Tate learned of a process for making sugar into small cubes, patented by Eugen Langen of Cologne. Hitherto sugar had been sold in blocks or ‘loaves’, which needed to be broken or chopped into smaller usable pieces. Tate (jointly with another refiner in Liverpool, David Martineau) bought the rights to the Langen cube-making process in 1875, with an agreement not to pay royalties until his refinery was producing them successfully. In 1892 Tate bought outright, for £12,000, the exclusive British rights to a superior cube-making process, which had been patented by Gustav Adant of Brussels. Tate's refinery began to use this process in 1894. The family firm became a private limited company two years later, when Henry retired and his eldest son, William Henry, was made its first chairman.

It was said by some contemporaries that Tate was much guided by his first wife, Jane. She was the daughter of John Wignall of Aughton, Lancashire. They married on 1 March 1841 and had seven sons (one of whom died in infancy) and three daughters. Tate outlived his first wife and married for a second time, on 8 October 1885; his new wife was Jane Amy Fanny, daughter of Charles Hislop of Brixton Hill. Tate's family life was always private—indeed, he was a very private man. He was guided by the religious beliefs and values of his Unitarian upbringing, though he was attracted to the Congregational church at the time of his second marriage. His public activities and benefactions were, however, invariably apolitical and non-sectarian. He enjoyed a good reputation as an employer. He never sought public or political office except for serving briefly on Liverpool city council in the 1860s as a Liberal. He was also a JP in Liverpool and Surrey. He fought shy of public acclaim and nearly always avoided public speaking, a task he hated, and at which he was said to be very poor.

Tate in some respects typified the Victorian nonconformist bourgeois, with a somewhat ascetic lifestyle of modesty and discretion. Yet he took a great interest in art, sought to encourage young artists, and built up an extensive collection of contemporary paintings at his home in Park Hill, Streatham Common, London. He was a close friend of Sir John Everett Millais, director of the Royal Academy. It had been Tate's intention to donate his collection to the National Gallery, but the trustees were prepared to accept only a sample. Thus, after some difficulty in finding a site, he endowed a new gallery at Millbank in London. This became the National Gallery of British Art, but has always been far better known as the Tate Gallery. He donated sixty-five of his own pictures, and three sculptures to the gallery. They included many which reflected his conservative taste, such as Orchardson's Her First Dance and The First Cloud; Waterhouse's Lady of Shallot; Millais' Ophelia, Vale of Rest, and North-West Passage; and several by Tindeman, Reid, and—Queen Victoria's own favourite—Sir Edwin Landseer.

The building for the new gallery was designed by Sydney R. J. Smith, and opened by the prince of Wales on 21 July 1897. On this occasion Tate broke his self-imposed public silence and made a speech presenting the gallery to the people. The initial cost of the gallery had been £190,000 but later additions brought the total close to half a million pounds. In recognition of this, and other benefactions, Tate was made a baronet in 1898. He had twice declined this honour, but was eventually persuaded to accept by Lord Salisbury, who told him that a refusal would be a snub to the royal family. For twenty years the new gallery was administered by the National Gallery, of which Tate had been made a trustee.

Tate made many other donations, often anonymously, and always discreetly. They included £42,500 for Liverpool University, £3500 for Bedford College for Women, and £5000 for building a free library in Streatham; additional provisions were made for libraries in Balham, Lambeth, and Brixton. There was £10,000 for the library of Manchester College, Oxford, and, also to Manchester College, £5000 to promote the 'theory and art of preaching'. In addition he gave £20,000 to the (homoeopathic) Hahnemann Hospital in Liverpool in 1885, £8000 to the Liverpool Royal Infirmary, and £5000 to the Queen Victoria Jubilee Institute, which became the Queen's Institute for District Nurses. In 1887 he gave £5000 to the Tate Institute in Silvertown, to serve as a non-sectarian, and apolitical meeting-place for working people. It had a large hall and several meeting rooms, a reading room, billiard room, and nine bathrooms.

Sir Henry Tate died at his home in Streatham, Park Hill, on 5 December 1899, after a long illness, and was buried at Norwood cemetery. He was survived by his second wife and succeeded in the baronetcy by his eldest son, William Henry.