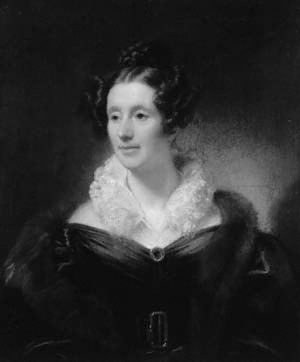 Somerville [née Fairfax; other married name Greig], Mary (1780–1872), science writer and mathematics expositor, was born on 26 December 1780 at the manse, Jedburgh, Roxburghshire, the fifth of seven children (three of whom died young) of Lieutenant (later Vice Admiral Sir) William George Fairfax (1739–1813) and his second wife, Margaret (1741–1832), daughter of Samuel Charters, solicitor of customs for Scotland. She grew up in the small port town of Burntisland, Fife. Apart from one year at Miss Primrose's boarding-school, Musselburgh (1791–2), she mainly taught herself, using the small family library; her uncle, Thomas Somerville, helped her learn Latin. In her early teens she acquired Euclid's Elements of Geometry and Bonnycastle's Algebra which she studied in secret, her father having forbidden her to read mathematics. Small and shy, but very good-looking, attractive, and sociable, in 1804 Mary married a cousin, Samuel Greig (1777/8–1807). A captain in the Russian navy, he became commissioner for the Russian navy and Russian vice-consul for Britain in London. In the capital she continued to study mathematics (without encouragement from Greig) and took French lessons. She had two sons, Woronzow Greig (1805–1865) and William George Greig (1807–1814). Following Greig's death in 1807 she and her children returned to Burntisland.

With the independence brought by her status as a widow with a small inheritance, and family connections which gave her access to Edinburgh social and intellectual circles, Mary was able to talk with people who could help her with her studies. John Playfair of Edinburgh University put her in touch with his protégé William Wallace, who provided mathematics instruction by correspondence. She was also tutored by Wallace's brother, John. In 1812 she remarried, her second husband being another cousin, William Somerville (1771–1860), an army doctor of liberal outlook who was interested in science and encouraged her studies. With continued guidance from the Wallaces she became familiar with much of the work in advanced mathematics, especially analysis, being pioneered in France. She also assembled a small but good mathematics library.

In 1816, following a change in William Somerville's army appointment, the Somerville family (which now included two small daughters) moved to London. With introductions from Scottish friends they quickly made their way into scientific society where they came to know several leading figures, including William Wollaston, Henry Kater, Thomas Young, Henry Warburton, and William Blake. Mary's serious enthusiasm for science and obvious talent led to her being accepted as a protégée by these men; the frequent close interaction she had with them, typically at private social gatherings, became her equivalent of formal instruction. She also established connections with several visiting French scientists at this time, connections expanded during a visit to the continent in 1817–18. Somerville's first scientific publication appeared in 1826, a report of her observations on the magnetizing power of sunlight, a topic then of much interest. Although her deductions were incorrect, the paper established her as someone active in scientific work.

The following year Somerville was asked by Henry Brougham, an influential figure in London educational circles, to prepare for publication in an educational books series a condensed English version of Laplace's Mécanique céleste (1798–1827). This 5 volume treatise in applied mathematical analysis presenting Laplace's nebular hypothesis of the solar system was one of the great guidebooks for nineteenth-century theoretical astronomers—the completion of the gravitational part of Newton's Principia. The version Brougham envisaged required substantial introduction and explication; his request to Somerville was hardly minor. She worked on the project for three years, consulting often with astronomer Sir John Herschel and mathematicians Augustus De Morgan and Charles Babbage. Her completed work covered the first four of Laplace's volumes. Brougham decided it was too long for his low cost series, but on Herschel's recommendation the publisher John Murray accepted it. The Mechanism of the Heavens appeared in 1831 and was generally well received. The following year the largely non-mathematical introduction, which Somerville considered her most important contribution, was published separately as Preliminary Dissertation to the Mechanism of the Heavens. Sales of the Mechanism were slow, but its adoption in 1837 as an advanced mechanics textbook at Cambridge guaranteed a small but steady demand. Recognition came quickly, the Royal Society commissioning a marble bust of her for its apartments, and Cambridge University entertaining her and her husband as official guests for a week. In 1834 the Royal Irish Academy made her a member and a year later the Royal Astronomical Society elected her and Caroline Herschel its first women honorary members.

Impressed by the overlap between the branches of science covered in her first project, and anxious to make clear her ideas about the interconnections she saw between the subjects discussed, Somerville started a second book. On the Connection of the Physical Sciences was published by Murray in 1834. Thanks to close consultations with leading scientists in both England and France (including Brougham, Faraday, Lyell, Whewell, Ampère, and Becquerel), the work was an up-to-date account of what would later be classed as astronomy and traditional physics, with, in addition, sections on meteorology and physical geography (then linked with heat). Supplemented with concise introductions to the technical material, it presented all in straightforward prose backed by mathematical notes. It was immensely successful. A pirated American edition and French, German, and Italian translations quickly appeared. Subsequent editions, incorporating the most recent research findings, came out in 1835, 1836, and 1837. Soon an established scientific classic and best-seller, it functioned for a time as an annual progress report for physical science.

In 1835 Mary was awarded a civil list annual pension of £200, increased to £300 two years later because of her family's financial difficulties. In 1838, William Somerville's health being poor, they went to Rome for the winter, and except for two brief visits Mary never returned to Britain. They had no settled home, but lived for periods in various Italian cities. She continued her writing, nine editions of the Connection appearing during her lifetime and a tenth in 1877; 15,000 copies were sold. In 1848 her third work appeared, her 2 volume Physical Geography, the first English language textbook in the field. Although preceded by the first volume of von Humboldt's acclaimed Kosmos (1845), it was an immediate success. Running to seven editions and for long on university textbook lists, it was her most popular work. In geographical writing it was pioneering since it discarded old constraints of political boundaries and anticipated the regional approach. A fourth work, On Molecular and Microscopic Science (1869), though its science was largely out of date, was kindly received out of deference to its author, then in her eighty-ninth year. Her autobiography, Personal Recollections, from Early Life to Old Age, finished just before her death, was edited and published by her daughter Martha in 1873.

In addition to her early honours, Mary Somerville received in 1869 the patron's gold medal of the Royal Geographical Society and the Victor Emmanuel gold medal of the Geographical Society of Florence. She was honoured by one Swiss, two American, and at least twelve Italian scientific societies. At Oxford, Somerville College (founded in 1879 as a non-denominational women's college) and a Somerville scholarship for women commemorate her name.

Although she was not among those nineteenth-century women who contributed to original work in science, Mary's long sustained and immensely successful scientific writing was unquestionably outstanding. Perhaps no woman of science until Marie Curie was as widely recognized in her own time. Her books were remarkably influential; not only did they bring scientific knowledge in a broad range of fields to a wide audience, but thanks to her exceptional talents for analysis, organization, and presentation, they provided definition and shape for an impressive spread of scientific work. She died at 66 Riviera-di-Chiaja, Naples, on 29 November 1872 and was buried in the English cemetery there.