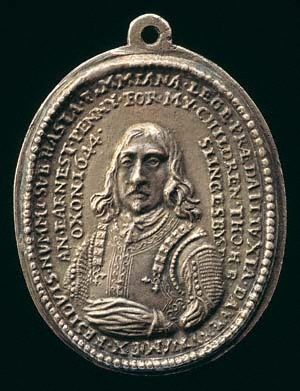 Slingsby, Sir Henry, first baronet (1602–1658), royalist army officer and conspirator, was born on 14 January 1602, second son of Sir Henry Slingsby (d. 1634) of Scriven, Yorkshire, and his wife, Frances (d. 1611), daughter of William Vavasour of Weston. Although the Slingsbys had settled in the Knaresborough area in the fourteenth century it was not until 1572 that a member of the family represented the borough at Westminster. Slingsby's father was returned for the town in every parliament between 1601 and 1624, served as sheriff of Yorkshire in 1611–12, and for the last five years of his life was vice-president of the council in the north under Thomas Wentworth, first Viscount Wentworth (the future earl of Strafford).

Slingsby entered Queens' College, Cambridge, in January 1619, and having become heir to the family estate upon the death of his elder brother in 1617, was accepted as a pupil by the discriminating godly divine John Preston. He took over his father's seat at Knaresborough in the first Caroline parliament (1625), but either did not stand or was defeated in the 1626 elections, and in March of that year obtained a licence to travel abroad. He was back in Yorkshire by 1628, when he stood again for Knaresborough, losing in a contest to the town's deputy steward, Henry Benson. On 7 July 1631 Slingsby married Barbara (bap. 1609, d. 1641), daughter of the prominent church-papist Thomas Belasyse, first Viscount Fauconberg, of Newburgh Priory, Yorkshire, with whom he had two sons and a daughter.

Following the death of his father in 1634 Slingsby devoted much of his time to improving his inheritance, which was worth about £1800 a year in 1640, and included lands in Knaresborough, several manors in the West Riding, and properties in London, Middlesex, and Essex. On 2 March 1638 he was created a baronet of Nova Scotia. He showed little interest in local politics, avoiding involvement in the quarrel between his father-in-law and Viscount Wentworth. Nevertheless by 1638 he was performing the duties of a deputy lieutenant for the West Riding, though without a formal commission. He regarded the Scottish covenanters' grievances as 'a pretence & cloake for wick'dness' (Diary, 12), and in the first bishops' war served in the earl of Holland's troop, taking part in the abortive march to Kelso.

In the elections to the Short Parliament, Slingsby was returned for Knaresborough after a three-way contest with Benson and Sir Richard Hutton of Goldsborough. He received no committee appointments, and apparently spoke only once in debate—on 4 May, when he supported the crown's offer of twelve subsidies in return for the abandonment of ship money. He argued that so long as the king had a legal judgment in support of ship money it was 'Rebellion' not to pay it (J. D. Maltby, ed., The Short Parliament (1640) Diary of Sir Thomas Aston, CS, 4th ser. xxxv, 1988, 140). These words were 'vehemently excepted against' (ibid., 141), and Slingsby was fortunate not to have been called to the bar of the house. The determination he showed in beating Benson and Hutton to the senior place at Knaresborough in the elections to the Long Parliament was not matched by his record at Westminster, where he was 'reserved and inactive' (CSP dom., 1658–9, 21). Although he professed to have no obligation to the court he was one of only six Yorkshire MPs who voted against Strafford's attainder. In addition he opposed the bill for abolishing episcopacy, which he saw as a threat to the peace of the church and to the social order in general. On the other hand he supported moves for the exclusion of the bishops from the Lords, having no truck with Laudian clericalism. His approach to religion appears to have combined something of the 'painful' earnestness of the godly with the reverence for order and decency of the Arminians. He greatly admired the Arminian clergyman Timothy Thurcross, though he apparently disapproved of 'new ceremonies' such as 'bowing & adoring towards the altar' (Diary, 8).

That Slingsby's sympathies lay with the king by late 1641 is perhaps evidenced in the subtle but deliberate way he frustrated the return of Sir William Constable (a leading Yorkshire puritan) in the Knaresborough by-election in November. Moreover only two of Slingsby's tenants voted for Constable; far short of the 'thirty voices of his dependants' (Memoirs of the Reign of Charles the First: the Fairfax Correspondence, ed. G. W. Johnson, 2 vols., 1848, 2.263) that Slingsby could usually command. On 20 May 1642 he left London to join the king at York, having been commissioned on 11 May to command the City regiment of the Yorkshire trained bands. On 13 December he was commissioned by the earl of Newcastle to raise a regiment of foot, which he commanded in the northern campaigns of 1643 and 1644. He was a combatant at Marston Moor, attended the king and the Oxford parliament in December 1644, and was present at the capture of Leicester and the battle of Naseby. In November 1645 he joined the garrison at Newark, and he was there when it surrendered the following May.

In July 1646 Slingsby petitioned to compound for his delinquency on the Newark articles, but this offer was apparently rejected. He refused to compound thereafter, claiming that he had 'nether personal mony to answer the summe, nor credite' (Diary, 345), though the main obstacle was his unwillingness to take the negative oath and covenant: 'the one makes me renounce my alegiance; the other my religion' (ibid., 119). He spent the next five years or so at his seat of Redhouse, Moor Monkton, Yorkshire, where he lived in great confinement, fearing arrest. In 1651 he was named in the act for the sale of delinquents' estates, despite the efforts of his friends at Westminster, in particular his nephew Slingsby Bethell and the regicide Sir John Bourchier, to have him exempted. His estate, which was valued at £11,220, was purchased by Slingsby Bethell and another of his kinsmen, Robert Stapleton, who held it in trust for Slingsby's children.

By 1654 Slingsby was in contact with the royalist underground, lending £100 to one of the king's agents, and reportedly delivering a letter from Charles Stuart to Lady Fairfax, aimed at winning over her husband. Implicated in the northern royalist rising of 1655, he was imprisoned at Hull, where he set about trying to subvert several of the garrison officers as part of a plot to betray the town to the king's forces. With the approval of their superiors, the officers played along with his design, and so convincing was their deception that he eventually gave one of them a commission signed by the king. The trap had been sprung, and on 25 March 1658 Slingsby found himself on trial for treason before a newly commissioned high court of justice at Westminster Hall. In his defence Slingsby argued that he had been 'trepanned' by the officers, who had taken seriously what he had spoken only in jest (Diary, 427, 431), but the court was not convinced, and on 2 June sentenced him to death. His nephew Lord Fauconberg, who had recently married Cromwell's daughter, interceded on his behalf, but to no avail. He was executed at Tower Hill on 8 June—his final speech reportedly showing 'little sense of sorrow, or fear of Death' (The Severall Tryals, 28; Mercurius Politicus, no. 419, 3–10 June 1658, 583). His body was given to his family, and he was buried in Knaresborough church. After the Restoration it was alleged that he had died a Catholic, though as late as 1651 he professed allegiance to the Church of England. Slingsby's estate passed to his eldest son, Sir Thomas Slingsby, who was a staunch supporter of the duke of York during the exclusion crisis. Like his father he was suspected of being a Catholic.

Sir Henry Slingsby's ‘Diary’, covering the years 1638 to 1648, is a valuable source for the civil war in northern England, and provides a revealing insight into the mind of an interesting, if not exactly typical, seventeenth-century country gentleman. The work was strongly informed by Slingsby's reading of Montaigne. The diary was edited from the manuscript in 1836 by the Revd Daniel Parsons, with notes and additions, including A father's legacy. Sir Henry Slingbey's instructions to his sonnes. Written a little before his death (1658).