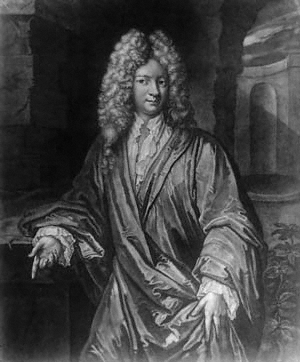 Rowe, Nicholas (1674–1718), poet and playwright, was born in the house of his maternal grandfather, Jasper Edwards, at Little Barford, Bedfordshire, on 20 June 1674 and was baptized there on 30 June, the son of John Rowe (1647–1692) and Elizabeth (d. 1679), daughter of Jasper Edwards. The Rowe family was long settled at Lamerton, Devon, and an ancestor is reputed to have been distinguished as a crusader. John Rowe was a London barrister of the Middle Temple and a serjeant-at-law. He died on 30 April 1692 and was buried in the Temple Church. His wife was buried at Little Barford on 25 April 1679.

Nicholas attended a private grammar school at Highgate, and in 1688 was elected a king's scholar at Westminster School, where he came under the charge of the formidable Dr Richard Busby. In 1690 he left Westminster School and entered as a student at the Middle Temple on 4 August 1691. He was called to the bar on 20 May 1696, and attracted the favourable notice of Sir George Treby, lord chief justice. Rowe did not take to the law, however, and having, even as a youth, read greatly, especially in classical and modern dramatic literature, he tried his hand as dramatist. On his father's death in 1692 he had come into an income of £300 a year and, having inherited his father's chambers in the Temple, he was free to follow his inclinations.

Rowe's fame rests on three foundations, his tragedies, his edition of Shakespeare's plays, and his translation of Lucan's Pharsalia. His career as a dramatist began in 1700 with the production of The Ambitious Stepmother, written in blank verse, as were his other plays. Much of the initial success of the play and of others of his plays stemmed from the performances of the great actors and actresses who were cast in the various roles. Thus the cast of The Ambitious Stepmother included the veteran Thomas Betterton, Mrs Bracegirdle, and Mrs Barry. Both in his prologue and in the dedication to the earl of Jersey Rowe invoked the name of Thomas Otway, the playwright whom he greatly admired for his ability to arouse the emotions. In the prologue he wrote of 'the weeping fair',

The play opened in December 1700, with revivals in 1706, 1715, 1722, and eight performances in 1759, that of 10 February 1759 by command of the prince of Wales. Tamerlane appeared in December 1701, and besides its virtues and shortcomings as drama, there is historical interest in that Tamerlane represents King William III and the villainous Bajazet represents Louis XIV of France.

The Fair Penitent is the first of Rowe's ‘she-tragedies’, modelled on, indebted to, and plagiarized from Philip Massinger's The Fatal Dowry (c.1618). The Fair Penitent is one of the first examples of domestic tragedy, the 'melancholy tale of private woes', as Rowe described it in the prologue. The play contains an aged roué named Lothario, whose name persists as descriptive of a type. Despite its great popularity, the play has had its detractors. Sir Walter Scott called it 'a poor imitation' of Massinger's play, adding, 'It does not greatly excel the original in the management and conduct of the piece; and, in every thing else, falls as far beneath it as the baldest translation can sink below the most spirited original ('An essay on the drama', in Miscellaneous Prose Works of Sir Walter Scott, 1849, 6.370). Dr Johnson, however, was a great admirer of the play, writing that 'There is scarcely any work of any poet at once so interesting by the fable and so delightful in the language' (Johnson, Poets, 2.67). Samuel Richardson's Robert Lovelace and Clarissa Harlowe are the literary descendants of Lothario and of Calista, the heroine. The rest of Rowe's dramatic output consists of a very bad farce, The Biter (1704); a classical tragedy, Ulysses (1705), which proved mildly successful, with Betterton taking the title role four years before his death in 1710; The Royal Convert (1707); Jane Shore (1714), a failed attempt at Shakespearian tragedy couched in Shakespearian language; and Lady Jane Gray (1715). Charles Gildon wrote of these last two she-tragedies in the 'Preface' to his Remarks on Mr. Rowe's Tragedy of the Lady Jane Gray (1715) that 'The Whore found more favour with the Town than the Saint.'

While writing his plays and seeing them produced, Rowe was not unaware of the political world about him. He was a devout whig, his party loyalty being recognized on 5 February 1709 when James Douglas, the second duke of Queensberry, secretary of state for Scotland, took him on as his under-secretary. He held this post until the duke's death on 6 July 1711. There is an authenticated anecdote to the effect that at some time thereafter, Rowe applied to Lord Oxford, a tory, for employment in some capacity. Oxford advised him to study Spanish, which Rowe did, in expectation of a possible foreign posting, only to be told by Oxford, when he reported his mastery of the language, 'Then, Sir, I envy you the pleasure of reading “Don Quixote” in the original' (Johnson, Poets, 2.71). After George I's succession to the throne on 1 August 1715, however, Rowe was appointed poet laureate on the death of Nahum Tate, and brought dignity and respectability to that position, virtues which his predecessors had not shown. Other political plums followed. In October 1715 he became one of the land surveyors of the customs of the Port of London. The prince of Wales made him clerk of his council, and in May 1718 he was appointed to the position of clerk of the presentations by the lord chancellor.

In his capacity as poet laureate Rowe was expected to write, and did write, odes to be sung on the new year and on the king's birthday, and other occasional poetry. He provided a prologue to Mrs Centlivre's The Gamester and an epilogue for her Cruel Gift, produced on 17 December 1716, as well as a prologue for his friend Colley Cibber's Nonjuror on 6 October 1717. Two other epilogues give further evidence of his intimacy with other playwrights. Rowe had done journeyman's work of various kinds, including some translations, but his most ambitious poetic endeavour was the translation of Lucan's Pharsalia, a work on which he devoted some twenty years, contributing a translation of the ninth book of that epic to the sixth volume of Jacob Tonson's Miscellanies (1709). The whole translation was published posthumously in 1719, dedicated to George I by Rowe's widow who was rewarded with a pension of £40 a year. Dr James Welwood, Rowe's physician and friend, wrote a prologue to the translation, treating of Lucan's work and adding the first biographical account of Rowe. The translation was almost universally praised, with Addison writing in The Freeholder (no. 40, 7 May 1716) that Rowe 'had delivered the sentiments [Lucan's] with greater perspicuity, and in a finer turn of phrase and verse'. The greatest praise came, however, from Dr Johnson in his life of Rowe. He wrote

The version of Lucan is one of the greatest productions of English poetry; for there is perhaps none that so completely exhibits the genius and spirit of the original. Lucan is distinguished by a kind of dictatorial or philosophic dignity rather … declamatory than poetical; full of ambitious morality and pointed sentences, comprised in vigorous and animated lines. This character Rowe has very diligently and successfully preserved. His versification … seldom wants either melody or force. His author's sense is sometimes a little diluted by additional infusions, and sometimes weakened by too much expansion. But such faults are to be expected in all translations, from the constraint of measures and dissimilitude of languages. The Pharsalia of Rowe deserves more notice than it obtains, and as it is more read will be more esteemed.

The edition of Shakespeare

While John Heminge and Henry Condell, Shakespeare's actor friends, were the first editors of Shakespeare's plays, responsible for the First Folio of 1623, Rowe is the first modern editor of the plays, the work for which he is most widely known. His edition of the canonical plays, but not of the poems, was published in six volumes in 1709, with a prefatory 'Some account of the life of Mr. William Shakespear', later revised by Pope. The 'Account' is the earliest biography of Shakespeare of any length. Rowe modernized Shakespeare's spelling and punctuation, listed the dramatis personae of each play for the first time, and introduced a relatively small number of silent emendations. Dr Johnson, in a footnote to the beginning of Twelfth Night in his Shakespeare (1765), wrote 'The persons of the drama were enumerated, with all the cant of the modern stage, by Mr. Rowe' (The Yale Edition of the Works of Samuel Johnson, ed. A. Sherbo, 7.311). Rowe, for example, had called Sir Andrew Aguecheek 'a foolish knight, pretending to Olivia'.

But Johnson also applauded some of the emendation, stating roundly that Rowe:

has made many emendations, if they were not made before, which his successors have received without acknowledgement, and which, if they had produced them, would have filled pages and pages with censures of the stupidity with which the faults were committed, with displays of the absurdities which they involved, with ostentatious expositions of the new reading, and self congratulations of the happiness of discovering it.

The Yale Edition of the Works of Samuel Johnson, ed. A. Sherbo, 7.93

Johnson wrote of the 'Account' that although it was 'not written with much elegance or spirit', it deserved being kept because it told what was known of Shakespeare's life up to that time (ibid., 7.94). And while he linked Rowe with Pope as 'very ignorant of the ancient English literature' (ibid., 7.56), his considered verdict on the edition was favourable.

Rowe was a popular figure in the literary world of his time. He was particularly friendly with Pope. In a letter Pope sent to John Caryll, dated 20 September [1713], he wrote:

I am just returned from the country, wither Mr. Rowe did me the favour to accompany me and to pass a week at Binfield. I need not tell you how much a man of his turn could not but entertain me, but I must acquaint you there is a vivacity and gayety of disposition almost peculiar to that gentleman, which rends it impossible to part from him without that uneasiness and chagrin which generally succeeds all great pleasures.

Pope obliged Rowe by writing the epilogue to Jane Shore in February 1714. But it was he who reported that Addison said of Rowe that 'the levity of his heart is such' that he could not be a friend (Johnson, Poets, 2.75). Rowe, however, numbered among his other friends Sir Samuel Garth, Richard Steele, Jonathan Swift, John Dennis, Colley Cibber, William Congreve, and John Hughes. Dr James Welwood wrote of him,

As to his person, it was graceful and well-made; his face regular, and of a manly beauty … His conversation was pleasant, witty, and learned, without the least tincture of affectation or pedantry; and his inimitable manner of diverting and enlivening the company made it impossible for any one to be out of humour when he was in it.

Rowe was married twice: first, on 6 July 1693 to Antonia, daughter of Anthony Parsons, one of the auditors of the revenue. Antonia died on 13 February 1712 and in 1716 he married Anne, daughter of Joseph Devenish of Buckham, Dorset. His son John, by his first wife, was baptized on 24 August 1699. There were six other children, most of whom died within a year of birth. With his second wife he had a daughter, Charlotte (1718–1739), who became the wife of Henry Fane, the youngest son of Vere Fane, fourth earl of Westmorland. Rowe died on 6 December 1718 and was buried on 19 December in Poets' Corner, Westminster Abbey. Pope's epitaph intended for Rowe's monument was drafted between 1718 and 1720, corrected for publication in 1720, and finally placed on the monument in 1773. In his will, witnessed by Pope and Thomas Hill (presumably the portrait painter), Rowe left all his property to his wife, his executor, with small legacies to his son, daughter, and sister (Sarah Peele). His wife died on 6 December 1747 and was also buried in Westminster Abbey.