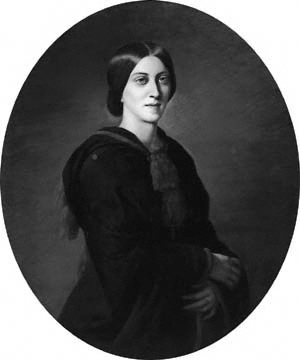 Procter, Adelaide Anne [pseud. Mary Berwick] (1825–1864), poet and women's activist, the eldest daughter and first child of the poet Bryan Waller Procter (1787–1874) and his wife, Ann, née Skepper (1799–1888), was born on 30 October 1825 at 25 Bedford Square, London, where her parents lived with Basil Montagu and his wife, Anna, Ann's stepfather and mother. She grew up in a household where 'everybody of any literary pretension whatever seemed to flow in and out' of her mother's literary salon (Belloc, 162). She was close to her father; Jane Brookfield wrote of Bryan Procter's attachment to his 'bright, enthusiastic daughter', and of father and daughter 'with critical approbation' admiring each other's work (Brookfield and Brookfield, 460–61). According to Charles Dickens, Adelaide Procter showed an early appreciation of poetry, and also a great facility for learning languages (French, Italian, and German), and for Euclidean geometry, music, and drawing. Nathaniel P. Willis described her as 'a beautiful girl, delicate, gentle, and pensive', looking as if she 'knew she was a poet's child' (Pencillings by the Way, 1835).

Adelaide Procter's first published poem was 'Ministering Angels', which appeared in Heath's Book of Beauty in 1843, but her poetical career was established in 1853 when she began a long connection with Charles Dickens's periodical Household Words. She submitted her poems under the pseudonym Mary Berwick, lest Dickens, who was a friend of her father's, print them 'for papa's sake, and not for their own' (Dickens). Dickens, however, admired the poems, and in December 1854, after he had shown Adelaide's mother a proof of the poem 'The Sailor Boy', Adelaide revealed her true identity. She became Dickens's most published poet, with seventy-three poems published in Household Words and seven in All the Year Round. In 1858 a first series of her Legends and Lyrics was published by Bell and Daldy, and was followed in 1861 by a second series. Both series were posthumously published in a single volume in 1866, with an introduction by Dickens. According to Coventry Patmore, demand for her poetry was greater than for any other English poet with the exception of Tennyson. Some of her poems were widely sung as hymns in the latter half of the nineteenth century; undoubtedly the most famous of her lyrics was 'A Lost Chord', set to music by Sir Arthur Sullivan in 1877. Her poetry was translated into German and published in America. Individual poems appeared in the Cornhill Magazine, Good Words, and the English Woman's Journal.

The first series of Legends and Lyrics was dedicated to Matilda Hays (1820–1897), at this time living in a ‘female marriage’ with the American actress Charlotte Cushman and for whom Adelaide Procter cherished an intense friendship. The friendship with Hays reflected Procter's involvement with the Langham Place circle [see Langham Place group] which was dedicated to improving conditions for women. Procter had been one of the original students at Queen's College in Harley Street in 1850, and had been a childhood friend of Bessie Rayner Parkes, a leading figure among the Langham Place group. At the end of the decade she was involved in the foundation of both the English Woman's Journal (1858) and the Society for the Promotion of the Employment of Women (1859). Her work for the society, which sought to create employment for middle-class women, involved visiting work places, including a watchmaking factory in Christchurch, Dorset, where women dominated the workforce. In 1861 she edited Victoria regia, a collection of poetry and prose intended to demonstrate the work and skills of the Victoria Press, which was run by Emily Faithfull to provide work for women as compositors. In the following year her collection of religious lyrics, A Chaplet of Verses, was published for the benefit of the Providence Row night refuge for women and children, a Catholic organization in east London founded by Daniel Gilbert; Procter had converted to Roman Catholicism about 1851, and Gilbert was her confessor. Adelaide Procter had always been delicate, and in 1862 her health began to fail as tuberculosis developed. She tried the cure at Malvern, but after some fifteen months bedridden she died on 2 February 1864 at 32 Weymouth Street, London, and was buried in Kensal Green cemetery.

Dickens wrote in his tribute in the 1866 edition of her poetry that 'she was a finely sympathetic woman, with a great accordant heart and a sterling noble nature', also noting that 'she was exceedingly humorous, and had a great delight in humour'. Procter's poetry, which often reflected the concerns of the Langham Place circle with the position of the single woman, was much neglected in the twentieth century until the 1980s, when her work began to receive critical attention, and several of her poems were anthologized. Isobel Armstrong drew attention to her 'magnificently humane lyrics on the Crimean War', and to some of her finest verses, including 'Unexpressed', 'Words', and 'A Lost Chord'. Commentators have applauded the originality of Adelaide Procter's poetry, while some have noted her unconventional treatment of women's sexuality in lyrics such as 'Three Roses' and in 'A Legend of Provence', a narrative poem concerning a nun who leaves her convent with a knight, but who is totally absolved of her sins and received back into her religious community. Some of the narrative poems, for example 'The Angel's Story', 'A Legend of Bregenz', 'A Tomb in Ghent', and 'The Story of a Faithful Soul', provide poignant, dramatic, and disturbing accounts of homelessness, exile, and displacement. She also wrote 'Adventures of your Own Correspondents in Search of Solitude', a humorous and ironic account of a journey to the Lake District made by herself and a woman friend identified as ‘A’ (possibly Annie Leigh Smith), and a life of the French salonière Juliette Récamier (English Woman's Journal, 4–6, 1859–61).