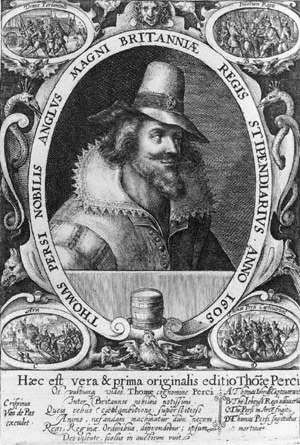 Percy, Thomas (1560–1605), conspirator, was a younger son of Edward Percy (c.1524–1590) of Beverley and Elizabeth Waterton. His grandfather, Josceline Percy (d. 1532), was fourth son of Henry Percy, fourth earl of Northumberland. Little is known of Percy's early life, following matriculation from Peterhouse, Cambridge, in 1579. He subsequently forged a career in the service of his cousin the ninth earl of Northumberland. As Northumberland came to trust him more and more, Percy was promoted to the post of constable in the earl's northern stronghold, Alnwick Castle. In 1601 he travelled with his master to the Low Countries, receiving a gift of £200 shortly afterwards. The date of Percy's marriage to Martha Wright, sister of two future co-conspirators in the Gunpowder Plot, is now unknown.

Percy was a pugnacious character. The Jesuit John Gerard noted that 'for the most part of his youth he had been very wild more than ordinary, and much given to fighting' (Morris, 57). In 1596, during a border affray, Percy killed one James Burne, a Scot. By the 1590s both governments were punishing such lawlessness, and Percy was committed to a London gaol. However, Northumberland's brother-in-law the earl of Essex wrote mitigating the offence, and the prisoner was released. Returning the favour, perhaps, Percy participated enthusiastically in a subsequent conspiracy engineered by Essex to entrap the Scottish warden of the middle marches.

According to Gerard, conversion to Catholicism reclaimed Percy from manifold vice to sober contemplation and religious virtue, and his comments are supported by those of another Jesuit father acquainted with the man, Oswald Tesimond (Edwards, 58). But the priests' claims were true only up to a point. Percy's enduring ruthlessness and lack of scruple, indeed, appear to have been precisely the traits which recommended him to Northumberland. In 1603 he was appointed receiver of the earl's rents in both Cumberland and Northumberland, a hard job, requiring energy and single-mindedness. Despite—or perhaps because of—the usual squabbling among estate officers, the earl's confidence in his capable servant remained unshaken (Nicholls, 150–52).

Northumberland's trust extended to matters of high politics, with the greatest prizes at stake. When, after Essex's downfall, the earl wanted to open a channel of communication with James VI, he turned to Percy, and it was the man whom Northumberland later called his 'ancient Mercury' who undertook three clandestine missions to the Scottish court (TNA: PRO, SP 14/4/85). James gave some unspecific assurances to requests from either the earl or his messenger that English Catholics might receive kinder treatment under a Stuart king—promises which Percy magnified for his own purposes after 1603. More immediately, these hugger-mugger services cemented the bond of trust between Northumberland and his officer. When the earl was appointed captain of the gentleman pensioners, early in the new reign, he disregarded James's instructions and dispensed with the oath of supremacy when admitting Percy to this royal bodyguard. This may have been mere oversight or the convenient omission of an oath offensive to a Catholic, but, given Percy's subsequent career, dereliction of duty was held to be as bad as wilful disobedience.

The full story of Gunpowder Plot is told elsewhere [see Fawkes, Guy]. In conversation with friends, among them Robert Catesby, the conspiracy's organizing genius, Percy bemoaned the weaknesses and futility of Catholic resistance to the new regime: 'Shall wee alwais talk, gentelmen, and never doe any thing?' (Hatfield MS 113/54). Catesby quietly reassured him that drastic action was indeed being contemplated. Sworn into the plot in May 1604, Percy subleased a dwelling adjacent to the House of Lords from Henry Ferrers of Baddesley Clinton, who in turn had leased the property from John Whynniard, keeper of the Old Palace of Westminster. From here the plotters began to drive a tunnel under Parliament House. Early in 1605 it was again Percy who took the lease of a ground-floor vault under the Lords' chamber itself, and it was there that Fawkes, posing as Percy's servant, was eventually arrested, as he prepared to fire over 18 hundredweight of gunpowder. After spending the autumn of 1605 collecting Northumberland's rents, Percy was in London by the evening of 2 November. Pursuing his own scheme of kidnapping the king's younger son, despite the doubts of his colleagues, he studied Prince Charles's daily routine at court. He also bolstered the faltering spirits of fellow conspirators before visiting Northumberland for dinner on 4 November, apparently to check that the plot had not yet been discovered.

Early on 5 November word spread that Fawkes had been captured. In a proclamation for his arrest issued shortly afterwards Percy is described as a tall, florid man, with a broad beard—'the head more white then the beard'—and stooping shoulders, being also 'long footed, small legged' (Larkin and Hughes, 1.123). He joined in the rebellion which followed, and on the morning of 8 November, in a final stand at Holbeach House, Staffordshire, Percy and Catesby, fighting back to back, were shot and mortally wounded with a single bullet. Percy's body was stripped by what the sheriff of Worcestershire termed the 'baser sort' among his posse (Hatfield MS 113/4). His head was sent to London. A sword which he had commissioned but never collected from the Catholic London cutler John Cradock may survive in the Swiss National Museum, Zürich, as accession LM 3675.

Percy was apparently estranged from Martha Wright, who, along with their daughter, drew an annuity of £50 paid by Lord Monteagle. Another, unnamed, woman is also described as his wife at the time of Gunpowder Plot. In November 1605 Martha resided in the midlands, while the other 'spouse' lived 'very private' as a schoolteacher in Holborn (TNA: PRO, SP 14/216/15, 134). A son, Robert, married Emma Mead at Wiveliscombe, Somerset, on 22 October 1615. Of two known daughters, one is rumoured to have married Catesby's son Robert.