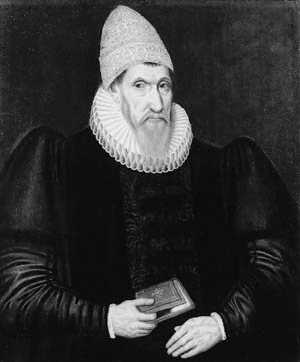 Napier, Richard (1559–1634), astrological physician and Church of England clergyman, was born in Exeter on 4 May 1559, the third son of Alexander Napier and his wife, Ann (Agnes) Burchley. Napier's family pedigree involved direct descent from the Scottish Napiers, lairds of Merchiston, his father being the elder son, by a third wife, of Sir Archibald Napier (d. 1522), fourth laird of Merchiston. Matriculating aged eighteen at Exeter College as a commoner on 20 December 1577, Napier enjoyed an extensive education in theology at Oxford University, receiving his BA in 1584 and his MA in 1586. He was elected a fellow of Exeter College in 1580, holding the post until 1590, but maintaining his links thereafter—symbolically reaffirmed with a donation for the building of the college kitchen in 1624. He left Oxford in 1590, was ordained, and installed as rector of Great Linford, north Buckinghamshire, where he was to live and work for the next forty-four years until his death. However, an uncomfortable, highly anxious preacher at the best of times, he is said (Lilly, 53) to have broken down in the pulpit early on in his ministry. Feeling obliged to abandon this public part of his offices thenceforth, he employed a curate to substitute, whom he supported with a salary and lodging in his own house.

The practice of medicine and magic

Napier devoted most of his time at Linford to the pursuit of theology, alchemy, and (more especially) astrological medicine. He had acquired a formal licence to practice from Erasmus Webb, archdeacon of Buckingham. His interest in astrology seems to have originated in a period of study with the industrious astrologer Simon Forman, after 1597. While the latter initially lampooned Napier affectionately, calling him 'a dunce', Napier's eventual talent for astrology and other personal qualities won Forman over. Such was their friendship that Forman quickly became an avuncular friend, and bequeathed Napier all his manuscripts on his death in 1611. Both men additionally knew and were strongly influenced by John Dee, the sixteenth-century astrologer, alchemist, and conjuror par excellence.

Despite the contested status of such arcane arts at this time, the combination of astrology and medicine clearly helped Napier to build up a prodigious and popular practice, tending to the bodily and mental ills of tens of thousands of patients. The afflicted came to him from all social ranks, although the majority of his clients were derived (and remained) from the lower middling, artisan, farming, and labouring classes. Even the poorer folk sought Napier out, no doubt encouraged by the fact that his fees were on the modest side, and that he would often forgo charging the poor, although the extent of his charity may have been exaggerated by some of his hagiographical biographers. About one-quarter of his clients were drawn from the nobility, aristocracy, and higher gentry, in part recruited initially through his brother, Sir Robert Napier [see below], whose success as a Levant trader made him wealthy, and who moved in the duke of Buckingham's circle. Yet this clientele, which included earls and lords (such as those of Cleveland, Northampton, and Rutland), was also some reflection of Napier's growing status as a practitioner. Eventually he was to number Sir Kenelm Digby, Sir Thomas Myddleton and other knights, baronets, and their families among his own personal friends. Perhaps the most notorious (and among the best documented) consultations recorded in Napier's notes were with those close to the duke of Buckingham, most especially the duke's brother, the adulterous and 'lunatic' Viscount Purbeck, John Villiers.

Napier produced no medical publications, but this did not disadvantage his reputation as a healer, which spread rapidly by word of mouth. The majority of his patients always came from the immediate neighbourhood, although towards the end of his life he was attracting small, but growing, numbers of patients from all over England (Devon and Cornwall only excepted), a few even coming from as far afield as Yorkshire, Lincolnshire, Shropshire, Dorset, and Somerset. Napier was assisted in his medical practice by two of his curates, who themselves adopted his methods and likewise became astrological physicians.

Most historical attention (thus far) has been accorded to Napier's mentally and psychically affected patients, who actually comprised less than 5 per cent (about 2000) of his enormous clientele. Yet his notes permit a unique and remarkable window into the mental afflictions and thought worlds of a wide range of mentally troubled and sick individuals and their families, and what they meant to a contemporary practitioner. Napier's empathy for the mental travails and ills of some of his patients may have been enhanced by the fact that he himself was evidently 'afflicted with mopish melancholy' (Bodl. Oxf., MS Ashmole 213, fol. 110). He also shared, to some extent, their anxieties about the spirit world, and offered them the kind of eclectic medical aid that they generally found highly palatable. Although reliant mainly on standard, conventional evacuative and antiphlogistic remedies, his extant medical notes show him dispensing a mixture of orthodox medicinal remedies, religio-moral counsel, and astrological, quasi-magical intervention—from purgation and bleeding, to mutual prayer, horoscope casting, the provision of amulets and charms, and ritual exorcism. Astrology informed Napier's entire practice, from the content and style of consultation and diagnosis to record-keeping and the timing and nature of treatments. Yet the stars were not his only otherworldly guides for, allegedly (according to Lilly and Aubrey), he also discoursed regularly with the spirit world, calling upon the angel Raphael for advice about his patients. However, there are (perhaps deliberately) scant signs of such angelic consultations in his notes, while even astrology remained merely a tool in his medical practice. It was a more earthly and more regularly medical assessment of signs and symptoms on which Napier relied most.

Practices which smacked of magic carried a serious threat in this period, conjuring, or necromancy, being a capital crime. Yet, while Napier was attacked publicly by puritans, and was even abused by some as a conjuror or witch, he was able to chart a relatively safe course socially and professionally through a steady assertion of moderate, conforming Anglicanism. No doubt this was assisted by his occasional assaults on Catholic doctrines, his staunch championing of unity in the church, and his upbraiding of nonconformists and schismatics (although this also encouraged sporadic conflicts with leading and local puritans). Alongside his repute as a physician and astrologer, Napier was also a magnet for the hungry minds of many scholarly churchmen. They visited him, not only to engage in discussion and to use his enormous theological library, but also to consult his many astrological works, and to be personally inducted in the art by Napier. This submerging and diffusing of more esoteric arts within a thorough grounding in mainstream Anglican theology, as well as the right kind of classical and medieval learning, must have further contributed towards Napier's avoidance of hazardous controversy. Importantly, too, he declined to broadcast openly his magical interests and practices.

For these and other reasons Napier has been portrayed, somewhat antithetically, as one of the last of the Renaissance magi but also as a crusader for orthodox Anglicanism. He has been seen as a significant figure in a world in gradual, uneven transition, when astrological and magical traditions—once permissible (if suspect) even for orthodox, learned Anglicans—were losing credibility and legitimacy. Napier is also especially worthy of note in that his medico-astrological practice can be (and has been) reconstructed by historians (most notably, Macdonald and Sawyer) in remarkable detail from the prodigious amount of his private manuscripts that have survived. His medical notes (whose meticulous format seems to have been encouraged by astrological methodologies) on their own comprise sixty volumes, quite apart from his numerous correspondence, and unpublished tracts and treatises.

Napier died at Great Linford on 1 April 1634, collapsing, appropriately, while on his knees in prayer; he was buried there two weeks later. The epitaph his curate recorded in the parish register stated with fitting simplicity that he was 'the most renowned physician of both body and soul'. He bequeathed virtually his entire estate to his nephew and pupil, Richard Napier [see below], the second son of his elder brother, Robert. This property included the parsonage (which Napier purchased for £200 in 1610 and substantially remodelled during his lifetime) and the advowson of Great Linford, as well as his large collection of manuscripts and books (most of which are now in the Bodleian Library, Oxford). An imposing portrait in oils, showing Napier in black clerical garb and painted (anonymously) about 1630, hangs currently at the Ashmolean Museum, Oxford.

Sir Robert Napier first baronet (1560–1637), the astrologer's brother, established himself at Bishopsgate Street, London, as a successful Turkey merchant and a member of the Grocers' Company. He purchased an estate at Luton Hoo, Bedfordshire, was knighted in 1611, and was created baronet in 1612. Elected sheriff in 1613, he declined the office and was duly fined; the following year he sought to persuade the common council that he could serve the City better if he was not called on to stand as alderman or sheriff. He married three times, and at his death in April 1637 was succeeded as second baronet by Robert, the eldest son of his third marriage.

Sir Richard Napier (1607–1676), physician, the second son of Sir Robert Napier, was born in London. He was enrolled at Gray's Inn in 1622 before entering Wadham College, Oxford, as a fellow-commoner in 1624. He graduated BA on 4 December 1624 and a year later was created MA by virtue of letters of the chancellor, which described him as a kinsman of the duchess of Richmond. This kinship was somewhat remote, depending on the descent of the duchess's husband from the Stuarts, earls of Lennox. Richard Napier was elected a fellow of All Souls, Oxford, in 1627 and proceeded BCL in July 1630. He had already been treating some of his uncle's patients at Great Linford before obtaining from John Williams, bishop of Lincoln, a licence to practise medicine. At his uncle's death he inherited all his property and manuscripts, and settled at Great Linford, the manor of which his father had purchased for him.

Napier continued to accumulate academic honours; in November 1642 he took the degree of MD at Oxford, he was knighted on 4 July 1647, he was incorporated MD at Cambridge in 1663, and in December 1664 he became an honorary fellow of the College of Physicians in London. He had previously given to the college library in 1652 thirteen finely bound volumes of the Greek commentators on Aristotle. Wood errs in describing him as an early member of the Royal Society, probably having confused him with William Napier, who was a member. Richard Napier married, first, Ann, youngest daughter of Sir Thomas Tyringham. Their eldest son, Robert (d. 1670), graduated MD at Padua. Thomas (b. 1646), the eldest son of Napier's second marriage (in 1645, to Mary, daughter of Sir Thomas Vyner, later lord mayor of London), inherited Linford and his father's medical books, papers, and correspondence.

On his way to visit Sir John Lenthall at Bessels Leigh, near Abingdon, Berkshire, in January 1676, Sir Richard rested at an inn where, according to Aubrey, on entering his chamber he saw a dead man lying upon the bed, whom on closer inspection he recognized as himself. He died shortly after his arrival at Lenthall's house on 17 January 1676 and was buried at Great Linford church. In 1769 Thomas Napier sold the estate, making over Sir Richard's manuscripts to Elias Ashmole. They are now in the Bodleian Library.