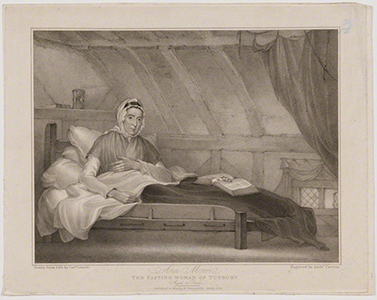 Moore [née Peg], Ann (b. 1761), the fasting woman of Tutbury, was born on 31 October 1761 at Rosliston, Derbyshire, the daughter of a labourer and sawyer, William Peg. She went into domestic service, and in 1788 married a fellow farm servant, James Moore, the illegitimate son of a woman named Laikin. It was apparently a shotgun wedding and Moore—who may have believed that the child was not his—was probably unwilling to marry her; whatever the circumstances, the couple appear to have soon separated. Ann Moore went back into service, eventually becoming housekeeper to a widowed farmer at Aston, near Tutbury. She bore her employer at least two children, a girl and a boy. About 1800, apparently after conversion by a local sect of Calvinists, she left the farmer to live in Tutbury, working as a cotton beater.

Here Ann Moore's long fasts began to attract attention, both from her neighbours and from the national medical community. From November 1806 she was said to have lost all interest in food. By March 1807 she was suffering from hysterical fits and stomach cramps, and in April she took to her bed; in May 1807 she attempted to swallow a biscuit, but was in great pain and vomited. The last solid food which she took was said to have been some blackcurrants in June 1807; her diet then subsequently seemed to consist of gradually diminishing doses of tea without milk or sugar. In September 1808 two local surgeons, Robert Taylor and John Allen, organized a watch of sixteen days to test the claims she was now making of total abstinence. She appeared to take no food or water in this time, and both men subsequently published letters in the London Medical and Physical Journal supporting her claims. Varied explanations were given for her loss of appetite, both by her and her audience. She seems to have claimed initially that nausea, caused by washing the sheets of a man who had died of scrofulous ulcers, had destroyed her appetite; later she declared that extreme want had driven her to semi-starvation, or that her illness had come on gradually. One account claimed that her fasts represented miraculous intervention: in this version Ann Moore, unable to feed both herself and her children, asked God to take away her appetite and he obligingly complied. Meanwhile, medical opinion suggested that her anorexia was caused by a disease of the oesophagus or a stomach complaint.

Debate also raged over Moore's apparent ability to survive without food. 'Air appears to be the means by which life is still maintained' (An Account of the Extraordinary Abstinence of Ann Moor, of Tutbury, 25) claimed one commentator, adopting a well-worn medical theory, while others cited similar cases from literature and recent history (it is possible that Moore's fasts were inspired by local traditions concerning the late seventeenth-century anorexic Martha Taylor of Bakewell). The accounts by medical observers outline her physical condition, mentioning her frequent perspiration, limited excretion of urine, flatulence, and extreme emaciation; visitors also commented on her cheerful and pious frame of mind. She was said to have received as much as £400 from her visitors, although her finances were apparently depleted by her daughter's extravagance and her own expenses.

On 31 March 1813 Legh Richmond, the well-known evangelical rector of Turvey, instituted a second watch. A committee was established under Sir Oswald Mosley and a group of watchers—consisting entirely, at Moore's request, of clergymen and doctors—was appointed. Moore herself seems to have been reluctant to submit to a second watch, and in particular objected to the introduction of a weighing machine. The watch began on 21 April; by 30 April Ann Moore was so feverish and emaciated that her death was expected. At her daughter's request the watch was discontinued. Moore initially persisted in her claims, but the evidence of excreta on her bedclothes and sheets was held to invalidate them. On 4 May she confessed to perpetuating a fraud before a local magistrate, signing her confession with a cross. Further investigation by Richmond suggested that her daughter, who had visited her daily during the first watch, had somehow smuggled in some food; it was also revealed that during the period of her earlier fasts tea, sugar, and milk were left within her reach and were apparently consumed by her. Nevertheless, it was clear that she was able to survive for some time on small amounts of liquids alone.

Moore's subsequent fate is unclear. According to Mosley she left Tutbury with her daughter, amid hooting from a crowd, and the pair settled in Macclesfield; they were afterwards sent to the Knutsford house of correction for robbing their landlord, but nothing further is known of either. Her fasts are reminiscent of the ascetic practices of the medieval woman religious; comparisons with modern sufferers from anorexia nervosa are also tempting. Some modern commentators have classified her as one of the 'miraculous maidens' who starved themselves as a means to gain money or attention, embodying the tensions of early modern European society undergoing the beginnings of secularization. But this comparison, helpful as it is, obscures aspects of Moore's case which are rooted in the peculiar climate of early nineteenth-century England, at war with France, troubled with social and political unrest among the working classes, and swept by evangelical religiosity. While her contemporaries offered medical and religious interpretations of Moore's behaviour, a modern historian may prefer to view both her fasting and her fraud as a form of social protest, an early hunger strike, witnessing to intense frustration at the situation in which her class, gender, and unfortunate personal history left her. A labouring woman with a disreputable past, Ann Moore could catch the public attention only as a religious celebrity—a minor Joanna Southcott—or as a criminal: ironically, she eventually appeared in both roles.