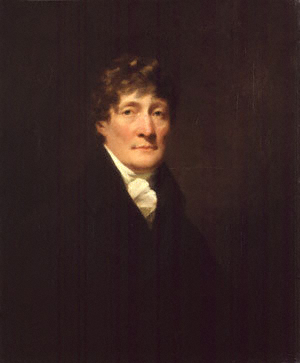 Mackenzie, Henry (1745–1831), writer, was born in Edinburgh on 26 July 1745, the son of Joshua Mackenzie, a prosperous physician, and his wife, Margaret Rose of Kilravock, eldest daughter of the sixteenth baron of Kilravock. Dr Mackenzie was directly descended from the eighth baron of Kintail, chief of clan Mackenzie. Henry Mackenzie was educated at Edinburgh high school and, from 1758 to 1761, at the University of Edinburgh. He was articled clerk to George Inglis of Redhall, king's attorney in exchequer, but left for London in 1765 to complete his studies in English exchequer practice, which as regulated by the Act of Union was also the law of the exchequer of Scotland.

Mackenzie returned to Scotland in 1768 and became a partner of George Inglis. He also began writing his sentimental novel The Man of Feeling, which was published anonymously in 1771. His London years furnished some of the material for his protagonist's adventures, which are described in a series of loosely linked fragments. Harley, with his ideal sensibility, frequently sheds tears over the misfortunes of the people he meets, and his innocence is constantly contrasted with the worldliness of others. The novel became the most popular of its decade. The first American edition was published in 1782, and by the 1820s the novel had appeared in nine different editions. It was reprinted several times and translated into French, German, Polish, and Swedish. Labelled a 'man of feeling' after the novel's publication, Mackenzie was indeed a man of extraordinary sensibility, and he is generally known as the arch-sentimentalist of Scottish literature. However, there were two sides to Mackenzie's character. While he was a man of taste and sentiment, he was also a pragmatic professional lawyer. Such a dualism reveals a specific Scottish trait evident in his writings as well as in his life. He was a prolific letter-writer, even by eighteenth-century standards, his correspondents ranging from literary acquaintances to politicians and diplomats in Britain and France. Members of his own large family also received his witty and insightful epistles.

The Man of Feeling was followed in February 1773 by The Man of the World, in which Sindall, a seducer and villain, is intended as a striking contrast to Harley. In that year Mackenzie succeeded Inglis in the crown practice for the board of customs and excise in the court of the exchequer, while his play The Prince of Tunis, a romantic tragedy, was first performed at the Theatre Royal in Edinburgh on 8 March. His other plays were Shipwreck (a version of Lillo's Fatal Curiosity), The Force of Fashion, a Comedy, and The White Hypocrite.

On 6 January 1776 Mackenzie married Penuel Grant, daughter of Sir Ludovick Grant of Grant and granddaughter of the earl of Findlater and Seafield. They had eleven children. His epistolatory novel, Julia de Roubigne, appeared in 1777. Mackenzie's professional legal career reached its zenith when he was appointed comptroller of taxes for Scotland in 1779, having been recommended for the post by Henry Dundas, Viscount Melville. Meanwhile, he continued his literary pursuits by editing two periodicals: The Mirror (1779–80) and The Lounger (1785–7). Following the example of Addison's Spectator, they were the first Scottish weeklies of their kind. Mackenzie contributed most of the essays and focused on life and society, advocating a way of life based on natural sentiment and harmony. The balance between egotistic and altruistic motives was very much a tenet of the Scottish Enlightenment. Mackenzie's essays 'On novel-writing' and 'Criticism on the character and tragedy of Hamlet' are good examples of the literary analysis to be found in The Mirror and The Lounger.

Publishers often took Mackenzie's advice before accepting a manuscript. He supported Robert Burns by writing a favourable and influential review of the Kilmarnock poems, and he gave Sir Walter Scott a start on the ladder towards literary fame. He later became one the first writers 'of any literary reputation to admire Byron' (Thompson, 323).

On 21 April 1788 Mackenzie read his 'Account of the German theatre' to the Royal Society of Edinburgh, of which he was a founder member. The lecture was the result of his unflagging endeavours to acquaint himself with German literature and German theatre. It inspired Scott to attempt translations of ballads by Gottfried August Burger and of Goethe's Götz von Berlichingen. Mackenzie himself tried his skill at adaptations for the British stage with the help of French translations of the original texts.

In 1790–91 there appeared, in a series of articles, Mackenzie's 'Letters of Brutus to certain political characters', strongly Pittite in tone and written for the Edinburgh Herald. Yet his elaborate 'Review of the principal proceedings of the parliament of 1784' (1792) was the only one of his numerous political writings which he subsequently acknowledged.

From 1789 Mackenzie was active in the Highland Society of Scotland. He was one of its directors and edited its Transactions. In 1797 he was asked to convene and chair a committee of the society charged with inquiring into the authenticity of the poems of Ossian, as ‘translated’ by James Macpherson. A Report, published in 1805, collected various pieces of evidence and explained the decision taken by the commission. It defended Macpherson against fabricating the poems altogether, but conceded that he inserted passages, deleted others, and refined the language. To all appearances, however, the report satisfied, at least partially, the desire of the Scottish literati to claim the heritage of a national epic dating back to an ancient civilization.

From 1801 to 1810 Mackenzie was a trustee of the Edinburgh Theatre Royal, together with Sir Walter Scott and William Erskine. As the grand old man of letters in Edinburgh, Mackenzie was commissioned by Constable to edit the works of John Home, whose tragedy Douglas had caused much controversy. In his biographical introduction to the three-volume edition (1822), he draws upon his insider knowledge and fund of literary anecdote. The unique position Mackenzie occupied in society and the great influence he exercised in all matters literary coincided with Edinburgh's cultural and intellectual heyday in the final quarter of the eighteenth and first two decades of the nineteenth century. A unifying, if not solitary, element in a rapidly changing cultural landscape, Mackenzie links the age of David Hume and Adam Smith to that of Robert Burns, John Galt, James Hogg, and Walter Scott.

Henry Mackenzie died in Edinburgh on 14 January 1831, and was buried in Greyfriars churchyard, Edinburgh. The Edinburgh Evening Courant observed in its obituary: 'We cannot but with feelings of regret, notice the departure of almost the last of that eminent class of literary men, who, about fifty years ago, cast such a lustre on our city … there have been few authors more distinguished'.