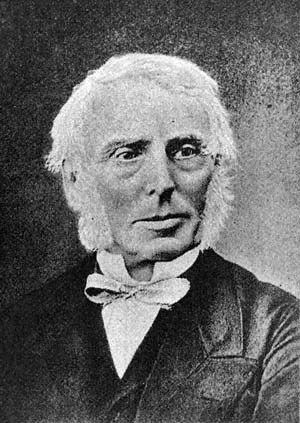 Bass, Michael Thomas (1799–1884), brewer and politician, was born on 6 July 1799 at Burton upon Trent, the eldest son of Michael Thomas Bass (1759–1827), brewer, and his wife, Sarah, née Hoskins (1763–1837). He was educated at the grammar school in Burton and afterwards at Nottingham, entering the family brewery (founded in 1777 by his grandfather) when he was eighteen years old. When Bass served his apprenticeship there in the late 1810s the firm was not in a particularly flourishing state.

The sale of Burton ales, long celebrated in England and the Baltic, was badly dislocated by the Napoleonic wars (1793–1815). The once buoyant export trade with Russia never fully recovered, and the number of breweries in the town contracted from thirteen in 1780 to five by the mid-1820s. Salvation came from an unexpected quarter. After 1822 a rapid switch was made from the Russian to the Indian export trade. The beer sold in the East Indies was a bright, pale ale—East India pale ale or IPA—a beer quite different from the high-coloured, sweet, strong beer that had comforted the Russians during their long winters. Sales burgeoned. By 1832–3 Bass, the market leader, sold over 5000 barrels a year there, around 40 per cent of the firm's total output. In comparison with the production of the great London breweries this barrelage was minute. But no British brewing firm made more rapid strides than Bass in the next forty years. It became the largest brewery in the world, propelling Burton to become the great brewing centre of Victorian Britain. At the heart of these extraordinary developments was M. T. Bass, who took over the firm's direction on his father's death in 1827.

Market conditions became increasingly favourable. The coming of the railways to Burton in 1839 meant that the delays, pilferage, and expense in transporting beer by canal boat could be avoided. Bright Burton beer, by the late 1830s the most fashionable beer in Britain, could be sent by rail to London at a quarter of the cost, with journey times slashed from over a week to half a day. It was never a cheap beer, but demand by a growing lower middle class gave it premium status for half a century.

M. T. Bass grasped his opportunities firmly. It is difficult to trace in detail the precise qualities of his entrepreneurship: few of his papers survive, in contrast to the abundance of statistics compiled in vast ledgers for the firm by an army of clerks. The figures reveal headlong expansion. Victorian commentators loved statistics to reveal progress: no firm provided a more dazzling series than Bass. Production rose from a mere 8480 barrels in 1830 to 340,000 in 1860 (placing the firm alongside the biggest London breweries), then soared in the booming beer market of the 1860s and 1870s to reach almost a million barrels by the late 1870s. In 1881 the firm's three breweries in Burton (powered by thirty-two steam engines) and twenty-six malthouses covered 145 acres. They consumed 100,000 tons of brewing materials a year; the firm's turnover was £2.5m a year, producing a revenue of £1000 a day for the government; the capital of the company was £3.2m. It was simply Britain's biggest brewery and best-known firm.

Michael Bass's achievement, shared with two generations of his highly competent Ratcliff and Gretton partners, was based on an extraordinary vision and superb management skills. This is evident both in the construction and expansion of his great brewery, his early use of science in brewing, and the way he exploited the free trade (Bass owned a mere handful of public houses at this stage). In fact Bass had opened four agencies (in London, Liverpool, Stoke-on-Trent, and Birmingham) before the railway came to Burton. Their number then expanded rapidly. In 1880 there were twenty-one in the United Kingdom with a branch in Paris. From these bases beer was distributed across Britain and Ireland and, from London and Liverpool, around the world. Bass's pale ales, imitated (not with total success before the late 1870s) everywhere in Britain, maintained their superb reputation. Their sale was aided by modest advertising and branding: the famous red triangle used on pale ale labels (the first registered trade mark) was recognized worldwide.

M. T. Bass's reputation as the leading Victorian brewer was not only dependent on the creation of his great brewery, but also on his advocacy of the brewing trade generally. While the Ratcliffs and Grettons took on the detailed management of barley purchases, malting, brewing, sales, and finance, M. T. Bass, although not relaxing for a moment his hand on the tiller (he was tough in dealing with his partners), took on the role of spokesman not only for his own firm but for brewers in Burton and Britain as well at a time when hostility to the trade by temperance reformers and Liberal nonconformists was mounting. His public relations and political skills were considerable.

In 1835 Bass married Eliza Jane, eldest daughter of Major Samuel Arden of Longcroft Hall, a member of an old Staffordshire landed family; they had two sons and two daughters. In 1847 Bass was first returned as MP for Derby in the Liberal interest, a connection he was to maintain until the year before his death, although according to the Brewers' Guardian of 6 May 1884 'in the House of Commons he was better known for his regular attendance than for any feats of oratory'. His assiduity was reflected in the series of statistics he engaged Professor Leone Levi to collect on living standards and the liquor trade in the early 1870s, and his role in tempering Liberal anti-drink legislation after 1868. Unlike his son Michael Arthur Bass, first Baron Burton, he remained a committed Liberal, advocating free trade, low taxation, and improved working-class living standards. He was active in the promotion of legislation to abolish imprisonment for small debtors; he brought in a bill (which caused some ridicule in Derby) to suppress organ-grinders as street nuisances. W. E. Gladstone offered him a peerage, but he did not wish to join the House of Lords.

Bass's enormous popularity in Derby, only checked by his opposition to the Ground Game Act of 1881, was due principally to his magnificent benefactions to the town. Matching gifts he made in Burton, his donations amounted according to his obituarists to £80,000, and had given Derby a new library, art gallery, recreation ground, and swimming-baths. One critic remained unimpressed, commenting that his charity was merely 'some feathers being given back by the man who had taken the goose' (Licensed Victuallers' Gazette, 2 May 1874). Besides these gifts, he was generous in his support of the Licensed Victuallers' asylum and schools (the association's annual dinner providing the great set piece for the defence of the brewing industry), the United Commercial Travellers Association schools, and the formation of the Amalgamated Society of Railway Servants in 1870. The latter interest clearly stemmed from his representation of a railway town, his investment in and advocacy of the railways since the 1830s, and a genuine concern about the long hours worked by railway employees. As a result of his charitable efforts, Liberal stance, and standing with the party's leaders, and his position as a highly successful brewer, his reputation stood supreme in the Victorian brewing industry.

A man of enormous activity and energy, Bass did not confine his interests to business and politics. Brewers enjoyed ample incomes (the Bass, Ratcliff, and Gretton families had all produced millionaire members by 1900); day-to-day management could be delegated to other partners and departmental managers. Bass was a keen sportsman, enjoying regular fox-hunting in the midland counties until a few years before his death. He was an early convert to the growing practice among the Victorian rich of enjoying holidays and recreations in Scotland. From the 1840s onwards he made an annual pilgrimage of between four and six weeks there to shoot grouse, stalk deer, and catch salmon. In later years he leased Tulchan Lodge, Strathspey. Earlier in his life, he had been an officer in the Derbyshire yeoman cavalry, assisting in quelling the local riots before the passage of the Reform Act of 1832. More domestically, he enjoyed a game of whist and billiards each evening with his family.

In 1852 Bass became a magistrate and deputy lieutenant for the counties of Staffordshire and Derbyshire. He also eventually became a landowner on some scale, although his landholdings in no sense matched his immense wealth. As early as 1848 he leased Byrkley Lodge and in 1853 Rangemore House from the Sneyd family (lessees in turn of the duchy of Lancaster). At Rangemore, Bass brought two large houses, village, church, and estate up to model standards. Rangemore Hall was much extended; Sir Joseph Paxton 'made of the … gardens and conservatories a veritable paradise' (Barnard, 17). By 1883 Bass owned 2283 acres in five counties.

Bass died on 29 April 1884 at Rangemore House, Staffordshire, and was buried in Rangemore churchyard on 5 May. Both his sons became members of parliament. Michael Arthur Bass succeeded him as head of the brewery, was MP for East Staffordshire, and became a baronet in 1882 during his father's lifetime. His other son, Hamar Bass, MP for Tamworth, was addicted to the turf and was effectively excluded from the brewery's management.

Close
National Portrait Gallery, London
Calendars of the grants of probate … made in … HM court of probate [England and Wales]