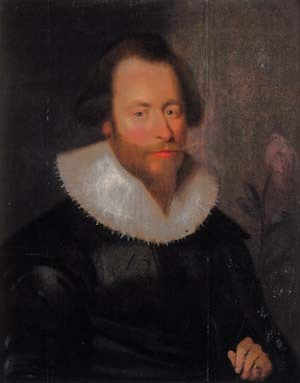 Johnston, Arthur (c. 1579–1641), poet, was born at Caskieben, Aberdeenshire, the fifth son of George Johnston of Caskieben (d. 1593) and Christian (d. 1622), the daughter of William, seventh Lord Forbes (d. 1622). The eldest of his five brothers, John, was sheriff of Aberdeen in 1630, and the youngest, William, was, first, professor of humanity and philosophy at Sedan, and then professor of mathematics in Marischal College, Aberdeen. On the evidence in his Encomia urbium, Arthur Johnston was educated at school in Kintore and thereafter at the University of Aberdeen. It is not clear whether he attended King's College or Marischal College; however, since he was later elected rector of King's College, it seems likely that this had been his college of education.

From Aberdeen, Johnston went first to Casimir College in Heidelberg, where he acted as a professor at a scholastic disputation in 1601. His status in Heidelberg at this date means that his traditional birth year of 1587 cannot be correct, and that it must be placed about 1579, a date supported by the inscription on the portrait of Johnston belonging to Marischal College. Johnston moved to Sedan, northern France, in 1603 at the invitation of Henri de la Tour, the duc de Bouillon. The duc was the uncle of the elector palatine, and it was probably through his connections in that part of Germany that he heard of Johnston and his compatriot, Walter Donaldson, who was invited to Sedan at the same time. Later they were joined by Andrew Melville, in exile in Sedan from 1611 to 1622.

Johnston was first a regent of the third class at the college at Sedan, and then regent of the second class and professor of logic and metaphysics in 1604. In 1608 he presided at the delivery of a thesis, dedicated to James VI and I. As well as being a writer of Latin verse, Johnston was also a doctor, and he received his medical qualification from Padua in 1610. After his qualification as MD, he was appointed as professor of physic at Sedan in October 1610, following the promotion of Donaldson to the post of principal. About this time he began to publish Latin verse; among his first productions was a criticism on George Eglishem MD, who had attacked George Buchanan's translations of the Psalms. At first, Johnston published anonymously, although later he acknowledged his authorship of these and other poems. Despite his talent for composition, Sir Thomas Urquhart's assessment of Johnston's early success—'[he] had been so sweetly imbued by the springs of Helicon that before he won fully three and twenty years of age he was laureated poet at Paris and that most deservedly'—however must be exaggerated (Urquhart, 164).

Johnston's last years in Sedan were marred by a court case against a miles of the region, called Hampté. The nature of the case is unclear, but it seems from the poems that Johnston was hard pressed, until his eventual victory (A. Johnston, Parerga, 1632, 13–18). Afterwards Johnston returned to Scotland, accompanied by his first wife, Marie de Cagniol or Kynuncle (d. 1624), who bore him thirteen children, of whom six seem to have survived. His second wife was Barbara Gordon, who outlived her husband, dying in 1650. Little is known for certain of any of his children. Two by his first marriage were baptized in Sedan, Daniel (b. 1606), and Françoise (b. 1608). Another daughter, Margaret, was married to George Dalgarno in 1652, while a son of his second marriage, William (b. 1636), became regent professor in King's College in 1657 and then civilian in 1669.

Johnston became a burgess of Aberdeen in 1622, and appears in various records in a locally important capacity, including acting as a witness and as surety for relatives. In a poem he implied that he was appointed medicus regius by James VI and I (Parerga, 43, 5–6), and he was certainly using the title in 1625 in the publication of his elegy for the king. After the publication of his Parerga and Epigrammata, both by Edward Raban in Aberdeen in 1632, Johnston turned his attention to a translation of the Song of Solomon, which he dedicated to Charles I, and of the seven penitential psalms, which he dedicated to Laud. These works were published in London in 1633, and Laud seems to have encouraged Johnston to translate all the psalms, although whether he was motivated by the quality of Johnston's verse or because Johnston was sympathetic to episcopalianism is unclear. The full translation of the psalms was published in 1637. In the same year Johnston demonstrated his interest in Scottish Latin poetry other than his own, for he edited a collection of Latin poetry written by his contemporary Scots, called the Delitiae poetarum Scotorum, which was published at Amsterdam, again in 1637.

In the same year Johnston was also elected rector of King's College, and became involved in the campaign to introduce a new constitution to the university. The other Scottish universities had been reformed under the influence of Andrew Melville several decades earlier; Aberdeen had gained exemption from King James. Nevertheless, the desire for reform in some quarters of the university remained strong, and Johnston supported it. However, after an appeal was made to King Charles on behalf of the mediciner, the canonist, and civilist, whose posts were forfeit under the new plans, the matter was settled against Johnston's party.

Johnston died in 1641 in Oxford, while visiting a daughter married to an English clergyman. By then he had written and published a substantial amount of Latin verse, mostly in elegiac couplets, but covering a wide range of topics, from his early attack on Eglishem, to the Encomia on Scottish burghs. His fame as a poet continued in the next centuries, when his work was republished by Thomas Ruddiman. He was also judged by Samuel Johnson as holding 'among the Latin poets of Scotland the next place to the elegant Buchanan' (Johnson, 11). He was a good and fluent poet, but his importance is enhanced by his publication of the work of other Scottish poets as well as his own.