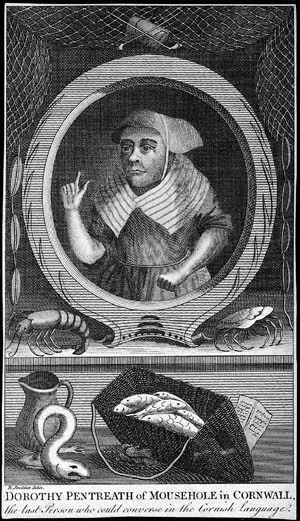 Pentreath [later Jeffery], Dorothy [Dolly] (bap. 1692, d. 1777), native Cornish speaker, was born at Mousehole, Paul parish, Cornwall, and baptized on 16 May 1692. She was the second of six children of Nicholas Pentreath, a fisherman, and his second wife, Jone (for whom no maiden name is recorded). Her poverty as a fish-seller or ‘jowster’ may have been linked to the fact that she never married and in 1729 gave birth to an illegitimate son, John Pentreath (d. 1778). In an apparent attempt to establish some legitimacy, it seems that it was he who recorded her name at burial as Dolly Jeffery, the surname presumably of the putative father.

Although doubts have, on occasion, been cast on Pentreath's linguistic abilities and iconic status in Cornish studies, her claim to fame is as the last fluent native speaker of Cornish (as noted by Jago, Nance, and Pool), rather than as the last speaker of this Celtic language. Contemporary speakers who outlived her, including her friend William Bodinar (1711–1789), learned the language in their youth, whereas she claimed to have been a monoglot speaker until she was twenty. This claim seems exaggerated, but Cornish was certainly her first language.

Much of the information on Pentreath comes from Daines Barrington (1727–1800), who ‘discovered’ her in 1768, found out more about her from Walter Borlase in 1772, and published two papers about her and the other few remaining Cornish speakers in Archaeologia in 1776 and 1779. The historian Richard Polwhele (1760–1838) noted that in 1797 a Mousehole fisherman told him that William Bodinar 'used to talk with her for hours together in Cornish; that their conversation was understood by scarcely any one of the place; that both Dolly and himself could talk in English' (Polwhele, 5.19–20).

Towards the end of her life Pentreath became something of a celebrity for 'gabbling Cornish' (Barrington, Expiration, 283). About 1777 she was painted by John Opie (1761–1807), and an engraving possibly from life was published in 1781 by Robert Scaddan (1720–1802?). She died in Mousehole and was buried in Paul churchyard on 27 December 1777. Her epitaph in Cornish was written before December 1789 by an engineer named Tomson from Truro, an acquaintance of Polwhele, who published it in 1806. From this came the erroneous idea that she had died aged 102. In 1860 Prince Louis Lucien Bonaparte, the linguist, and the vicar of Paul, the Revd John Garrett, erected a handsome stone monument in the wall of the churchyard at Paul in her honour. In 1887 this was moved to her previously unmarked grave and her skeleton was exposed and examined. A lot of imaginative folklore about Dolly developed during the nineteenth century. The centenary of her burial was marked by a commemoration at the grave site, including readings in Cornish, and the event stirred an increasing interest in the language, leading to its revival at the beginning of the twentieth century.