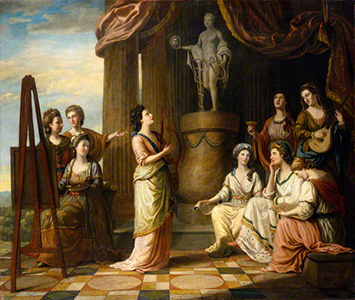 by Richard Samuel, 1778 [top left, hand out in gesture Portraits in the Characters of the Muses in the Temple of Apollo]

Barbauld [née Aikin], Anna Letitia [Anna Laetitia] (1743–1825), poet and essayist, was born on 20 June 1743 at Kibworth Harcourt, Leicestershire, elder child of the Revd John Aikin (1713–1780), schoolmaster, and his wife Jane (1714–1785), daughter of the Revd John Jennings of Kibworth and his wife Anna Letitia Wingate. Both her parents were Presbyterian. She was educated by her mother, who taught her to read by the age of two but who also, fearing that a girl brought up in the presence of schoolboys would become a ‘hoyden’, strictly curbed her activity (LeBreton, 24–5). Later she persuaded her father to teach her Latin and some Greek, and she read avidly in his library. In 1758 her family moved to Warrington, Lancashire, where Mr Aikin served as tutor in languages, literature, and divinity at Warrington Academy. Among its tutors and students she made lifelong friends, notably Joseph Priestley (1733–1804), his wife Mary (1742–1796), and William Enfield (1741–1797).

Inspired by Warrington's intellectual atmosphere and encouraged by her brother John Aikin (1747–1822), with whom she shared literary and scientific tastes, Anna Aikin began, around the mid-1760s, to write poems. The poems display her varied interests: zoology ('To Mrs. P[riestley], with some Drawings of Birds and Insects'), the new industrial infrastructure of Lancashire ('The Invitation', praising the duke of Bridgewater's canal), opposition politics ('Corsica', 1769, written for a subscription in aid of Corsican independence), humane treatment of animals ('The Mouse's Petition'), intense devotional experience ('An Address to the Deity'), and friendship, especially with women (poems to Mary Priestley, her cousin Elizabeth Belsham, and others). In style her poems range from burlesque ('The Groans of the Tankard') to sublime ('A Summer Evening's Meditation'); some are impishly humorous. Her Poems (1773) was a popular and critical success, reaching five editions by 1777 (with another in 1792) and winning the adulation of the Monthly Review ('a justness of thought, and vigour of imagination, inferior only to the works of Milton and Shakespeare') and the admiration of women readers—for instance, Mary Scott wrote in The Female Advocate (1774): 'We feel thy feelings, glow with all thy fires, / Adopt thy thoughts, and pant with thy desires' (Works, xxxii). Her next publication, jointly with John Aikin, was Miscellaneous Pieces in Prose (1773), a collection of essays. One, 'On romances', an imitation of Samuel Johnson, earned his praise; another, 'Against inconsistency in our expectations', was admired for its ethical argument and stylistic elegance.

Although shy and awkward in manner, Anna Aikin 'possessed … great beauty, distinct traces of which she retained' into old age (Aikin, ix–x), and at Warrington she had several suitors. According to legend, one was Jean-Paul Marat, who is said to have served briefly as tutor in French at the academy (Rodgers, 43–4). On 26 May 1774 she married the Revd Rochemont Barbauld (1749–1808), an academy graduate, son of a Church of England clergyman descended from French Huguenot refugees. At Warrington Rochemont Barbauld converted to dissent; he later became a zealous Unitarian. Having no children of their own, in 1777 the Barbaulds adopted Charles Rochemont Aikin (1775–1847), her brother's second son.

After their marriage the Barbaulds settled at Palgrave, Suffolk, where on 25 July 1774 they opened a school for boys. A great success, the school drew boys from as far as New York and the West Indies; during the Barbaulds' tenure an estimated 130 boys passed through it. Several achieved eminence in later years: examples are William Taylor (1765–1836), whose translations of German literature influenced the first generation of Romantic poets, and Thomas Denman (1779–1854), drafter of the Reform Act of 1832. The school also occasioned Barbauld's most influential books: Lessons for Children (4 vols., 1778–9), written to teach Charles to read, and Hymns in Prose for Children (1781), a primer in religion for her youngest pupils. Reprinted in England and America throughout the nineteenth century, and translated into other languages, they profoundly affected reading pedagogy among the middle classes; the name Mrs Barbauld became virtually synonymous with infant instruction. Equally popular was her brother's Evenings at Home (1792–6), of which she was widely thought the principal author although she wrote only fourteen of the pieces it comprised.

In 1785 the Barbaulds resigned from Palgrave School and travelled in France, meeting liberal aristocrats and, perhaps, a future leader of the French Revolution, Jean-Paul Rabaut de Saint-Étienne (1743–1793). In 1787 they settled in Hampstead, Middlesex, where they took pupils. Roused by Edmund Burke's attacks on the French Revolution and parliament's failure (March 1790) to repeal the Test and Corporation Acts, Barbauld returned to authorship with a powerful tract, An Address to the Opposers of the Repeal of the Corporation and Test Acts (1790), in which she hailed the French Revolution as sublime evidence of human improvement. In 1791 she responded to parliament's failure to abolish the slave trade with a Juvenalian verse satire, An Epistle to William Wilberforce, esq. … on the Rejection of the Bill for Abolishing the Slave Trade. In 1793 she denounced the British government's entry into war against France in a sermon, Sins of Government, Sins of the Nation. In the controversy over public worship, however, she argued eloquently for traditional practice (Remarks on Mr. Gilbert Wakefield's Enquiry into the Expediency and Propriety of Public or Social Worship, 1792). Although she associated with Unitarians and was claimed by them, it is doubtful that she shared all their beliefs. Her churchgoing habits were eclectic, her religious attitude was liberal, and she valued devotional spirit over doctrine.

Starting with essays and poems in her brother's Monthly Magazine (1796–1802), Barbauld began contributing to periodicals and taking commissions from booksellers. She wrote for the Annual Review (1803–9), edited by her nephew Arthur Aikin (1773–1854), and provided prefaces to editions of Mark Akenside (1794), William Collins (1797), and Addison and Steele (1804). She was the first editor of the correspondence of Samuel Richardson (6 vols., 1804); subsequent scholars have criticized her editing, but her biography of Richardson remains valuable. Barbauld also wrote prefaces for a 50-volume collection, The British Novelists (1810), producing an important body of criticism of the novel and individual novelists. In 1809 she began to write for the Monthly Review, contributing some 340 reviews during six years. She also brought out a literary anthology for young women, The Female Speaker (1811). Her last separate publication and most ambitious work was Eighteen Hundred and Eleven (1812), a poem deploring Britain's participation in the seemingly endless, apparently disastrous war against Napoleonic France and foretelling Britain's economic decline while, however, asserting its cultural dominion over the coming American empire. This poem met with extreme hostility from the tory press (John Wilson Croker's abusive review in the Quarterly—formerly attributed to Robert Southey—is legendary); today, however, Eighteen Hundred and Eleven is considered a major poem of the Romantic era.

In 1802 the Barbaulds settled in Church Street, Stoke Newington, Middlesex. Their associates included the circle of radical intellectuals gathered around Joseph Johnson (1738–1809), Barbauld's publisher, and such literary figures as Joanna Baillie, George Dyer, Maria Edgeworth, William Godwin, and Henry Crabb Robinson. Barbauld, who took benevolent interest in young men, sought to mentor Samuel Taylor Coleridge; later he turned against her, and his ridicule injured her posthumous reputation. Her husband appears to have suffered from manic-depressive disorder; this affliction troubled their marriage until, in 1808, Rochemont grew violent and a separation became necessary. She remained at Stoke Newington after his death by suicide in 1808, but subsided into melancholy; the death of her beloved brother John in 1822 deeply affected her. Gradually she developed asthma (a family ailment) and she died of it at Stoke Newington, on 9 March 1825, and was buried with her brother in the graveyard of St Mary's parish church. Her niece Lucy Aikin (1781–1864) edited her Works (1825), adding fifty-two poems to the fifty-five Barbauld had published, and a volume of teaching pieces and essays called A Legacy for Young Ladies (1826).

During the century after her death Barbauld came to be remembered chiefly as a writer for children, as the author of one poem, 'Life', which Wordsworth had praised, and as the object of attacks by Coleridge and Charles Lamb on the basis of her didacticism. A dislike of the moral tale led E. Nesbit to place Barbauld among the unpleasant Book People in Wet Magic (1913). However, along with her sister writers, Barbauld benefited from feminist reappraisal after the 1970s and is now perceived as a leading writer of early Romanticism.