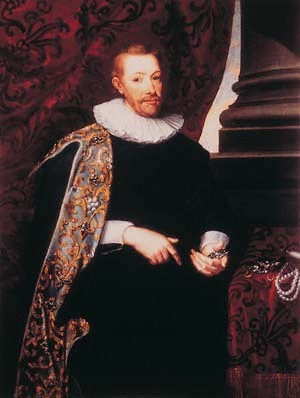 Heriot, George (1563–1624), jeweller and philanthropist, was born in Edinburgh on 15 June 1563, the eldest son of George Heriot (1539/40–1610), goldsmith and MP, of Edinburgh and his first wife, Elizabeth Balderstone. Heriot was apprenticed to his father's trade, and on 14 January 1586 he was contracted to marry Christian, daughter of Simon Marjoribanks (d. 1603?), an Edinburgh merchant. They had two sons who were drowned at sea (possibly on their way to England in 1603). Heriot's father gave him 1500 merks (about £80) to set up business as a goldsmith and moneylender, allowing him to open a small booth or shop attached to St Giles's Cathedral. On 19 January 1588 he was admitted a burgess of Edinburgh, and on 28 May 1588 he was admitted a member of the guild of Edinburgh goldsmiths. In 1590 Heriot was living in Fishmarket Close in Edinburgh. By January 1594 he was 'deacon convener' (Reg. PCS, 6.314) of the incorporated trades of Edinburgh, and on 17 July 1597 James VI appointed Heriot goldsmith to Queen Anne. In this role he lent money to the queen, often using her jewels as security, having supplied the jewels in the first place. Between 1593 and 1603 Heriot's business dealings with the queen may have amounted to £50,000. On 4 April 1601 Heriot was appointed jeweller to James VI. In December that year he was a member of a syndicate commissioned by the government to issue a replacement Scottish coinage. In January 1603 he was a farmer of the customs.

Heriot's entrenched position in the Scottish crown's financial affairs was threatened by James VI's accession to the English crown as James I in March 1603. Heriot duly followed the king to London, dwelling at the New Exchange. On 9 November 1603 he received a patent as one of three jewellers to the king, with a salary of £150 per annum. On 24 August 1609 Heriot married in Edinburgh Alison (1591/2–1612), eldest daughter of James Primrose of Carrington, clerk to the Scottish privy council, with a portion of 5000 merks. According to the marriage contract of 26 September 1608, 20,000 merks were to be laid out on land. They had no children before his wife died on 16 April 1612. By 1609 Heriot was receiving 10 per cent interest on his loans to the queen, which totalled £18,000, although he seems to have had some difficulty recovering the capital. However, his position at court saw him sell jewels to other members of the royal circle such as the first duke of Buckingham and the earl of Somerset. In November 1620 he was granted the imposition on sugar for three years. Heriot was now living in the parish of St Martin-in-the-Fields, and had an estate at Roehampton, Surrey.

Heriot had no legitimate children, and on 3 September 1623 he executed a 'disposition and assignation' (Inventory, 2) to Edinburgh council announcing his intentions to found a hospital in the city. Heriot died in London on 12 February 1624, and was buried on the 20th in St Martin-in-the-Fields, the funeral oration being delivered by Walter Balcanquhall. Heriot provided for two illegitimate daughters, aged about ten and four, by his will of December 1623. He also left bequests to his stepmother, Christian Blawe, and his half-brothers and -sisters, as well as his nieces and nephews, especially the daughter of his deceased brother, Patrick, whom he feared would challenge his will and its main beneficiary. Heriot left the residue of his estate to the 'provost, bailiffs, ministers and council' of Edinburgh, 'for and towards the founding and erecting of an hospital', and for purchasing lands for the 'maintenance, relief bringing up and education of so many poor fatherless boys freemen's sons' as the funds allowed (will). In all £23,625 was bequeathed to the hospital and school which bears his name, as does Heriot-Watt University, formed from part of the George Heriot Hospital and trust.