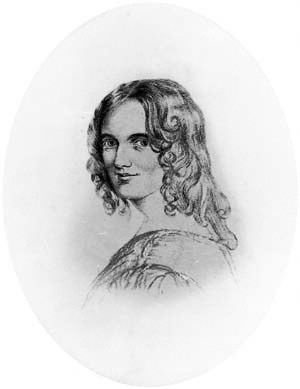 Adams, Sarah Flower (1805–1848), poet, was born on 22 February 1805 at Great Harlow, Essex, the daughter of Benjamin Flower (1755–1829), nonconformist editor of the radical Cambridge Intelligencer, and Eliza Gould (1770–1810), a Devon schoolteacher. Her father was famous for going to prison in defence of his right to freedom of expression in 1799, while her mother had been forced out of her school for refusing on principle to cancel her subscription to his Intelligencer; they married in 1800. Her elder sister Eliza Flower (1803–1846) was a talented musician and composer, who later set many of Sarah's hymns to music. Their mother died in 1810 when Sarah was five; their father sporadically taught the girls himself with occasional help from village schoolmasters.

By 1820 the family had moved to Dalston, near Hackney. Harriet Martineau met them, and was so struck with the sisters that she later modelled the Ibbotson girls in her novel Deerbrook (1839) on them. In 1823 the family travelled to the highlands of Scotland with a party of friends of the Revd W. J. Fox, and on 8 September Sarah easily broke the female record with her swift ascent of Ben Lomond. On their return they became friends with the young Robert Browning, the 'poet boy', as they called him; he discussed his religious doubts with Sarah, unsettling her beliefs, and supposedly modelled ‘Pauline’ on Eliza.

After their father's death in 1829, Sarah fell ill with what became tuberculosis. While recuperating on the Isle of Wight she composed her long poem The Royal Progress (published in 1845), on the last queen of the Isle, Isabella, who in 1293 had abdicated in favour of the English king Edward I. The sisters were left in the care of Fox, well-known South Place Unitarian preacher and editor of the Monthly Repository, to which Sarah (as ‘S. Y.’) contributed essays, poems, and stories from 1834 to 1836. She met a fellow contributor, the widower William Bridges Adams (1797–1872), engineer and inventor, at the house of her friend the feminist writer Harriet Taylor and they married on 24 September 1834. With his encouragement she pursued a career on the stage, which she believed to be a vocation of high moral power, and was initially successful (as Lady Macbeth at Richmond in 1837; then Portia and Lady Teazle), with praise by Macready leading to an engagement for the Bath Theatre, traditionally a springboard to London. But her health broke down again and she was forced to reorient her ambition towards literature, publishing her finest long poem, Vivia perpetua: a Dramatic Poem in Five Acts, in February 1841. In it the Christian martyr Vivia is put to death, refusing compromise, with her baby at her breast; issues of women's freedom from male control are canvassed throughout the poem:

Sarah Flower Adams also contributed poetry reviews (including one of Elizabeth Barrett) to the Westminster Review. Described by Fox's daughter as 'tall and singularly beautiful' (Bridell-Fox, v), she described herself (in May 1837) as 'very thin, very deaf (making me very stupid), and five feet two and a-half' (ibid., x). Her deafness (as an adult) was inherited from her father. Her best-known hymn, 'Nearer, my God, to Thee', composed in 1840 and expressive of her struggle with religious doubt, was first published in 1841 with twelve more of her hymns in a collection edited by W. J. Fox. It was altered by later editors into more orthodox shape, and is reported to have been played by the band as the ocean liner Titanic went down in 1912 (Stephenson, 62). Sarah Flower Adams was a strong supporter of all human rights, especially those of women, but also those of the working classes. She wrote a number of political poems, some for the Anti-Corn Law League (excerpts were printed in Fox, vol. 4), and in 1845 a non-preachy verse catechism for factory schools, The Flock at the Fountain. She died, probably of cancer, at 1 Adam Street, Middlesex, on 14 August 1848, two years after her sister, and was buried with Eliza and her parents in the family plot at Harlow on 21 August, her own hymns sung at her funeral.