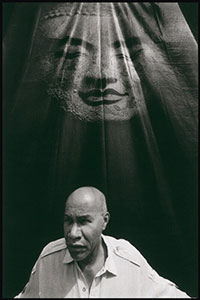 Abbensetts, Michael John (1938–2016), playwright and television screenwriter, was born on 8 June 1938 in Georgetown, British Guiana, the son of Neville John Abbensetts, a doctor, and his wife, Elaine. They were a middle-class family of mixed African and European heritage. Abbensetts attended Queen’s College in Georgetown (1952–6) before moving to Canada where he studied at Stanstead College, Quebec, and Sir George Williams University, Montreal (1960–1). Inspired by a performance of John Osborne’s groundbreaking play Look Back in Anger in Montreal, he moved to Britain in 1963 to begin his writing career in the theatre. Ten years later he made a successful move to television. Meanwhile, he supported himself by working as a security officer at the Tower of London (1963–7).

Sweet Talk was Abbensetts’s first stage play. It depicted the tensions in the lives of Caribbean settlers living in cramped conditions in a London bedsit. For Sweet Talk he shared the 1972 George Devine award with Mustapha Matura, and the following year it was staged at the Royal Court Upstairs, directed by Stephen Frears. Also in 1973, Abbensetts’s first television drama, The Museum Attendant, was shown on BBC2. Abbensetts based this play on his experiences of working as an attendant at Sir John Soane’s Museum in Lincoln’s Inn Fields. It was a powerful, funny, and shocking exposé of the racism experienced by a black museum attendant in his place of work.

The next decade was Abbensetts’s busiest, moving between theatre, television, and radio. He later explained that he was offered a variety of work because he included black and white characters together. He said, ‘they thought “oh he can write white characters as well” so people began to take more notice of my work’ (Stoby, 5). In 1974 he was appointed writer in residence at the Royal Court. As Michael Coveney later observed, ‘The legacy of the colonial experience in the Caribbean, with its confusions of racial identity and mixed-blessing migration to Britain in the 1960s, was a potent theme in [his] stage and television work’ (Guardian, 30 Nov 2016).

Abbensetts became arguably the most successful black writer in British television when he contributed to Granada’s popular daytime drama series Crown Court (‘Inner City Blues’, 1975) and single plays such as ‘Roadrunner’ in the ITV Playhouse series (1977). For the BBC he explored conflicts in a black British household with the outstanding comedy drama Black Christmas (1977). Carmen Munroe gave a magnificent star turn as the feisty wife and mother who is determined that her dysfunctional family will enjoy Christmas, but instead she finds her home being turned into a battlefield. Her outspoken husband was played by Norman Beaton.

Beaton then starred alongside Corinne Skinner-Carter and Joseph Marcell in Abbensetts’s next television project, the popular Empire Road. Often erroneously described as a black soap opera, or ‘the black Coronation Street’, Abbensetts insisted that it was a drama series. ‘I never really liked it being called a soap’, he said. ‘It was the Daily Mail that called it that. I always thought of it as a drama series. Each episode had a separate story … whereas in soap operas, a story can stretch for many weeks’ (Stoby, 4). Focusing on a black family in Birmingham, and the culturally diverse community in which they live, Empire Road ran for two series on BBC2 in 1978 and 1979 before the BBC axed it, with no explanation. The decision upset many people involved in the production, including Abbensetts and Beaton. In 1992 Abbensetts reflected:

One of the best things about Empire Road was that we felt we were doing something that no one else had done before. It really was a happy band of actors. It was an enjoyable experience and everybody was really excited about it. For a while, I felt I was part of something in a way that I’ve never really felt again. It was wonderful.

Abbensetts and Beaton continued to work together on the television plays ‘Easy Money’, in the BBC2 Playhouse series (1981), and Big George is Dead (Channel 4, 1987).

In 1983 Abbensetts took up a visiting professorship at Carnegie Mellon University, Pittsburgh. There he met Connie, a lawyer, whom he married. The couple settled in Texas, but after Connie’s death, towards the end of the 1980s, Abbensetts returned to Britain. In 1994 he wrote Little Napoleons for Channel 4, a four-part comedy drama in which two rival solicitors, played by Beaton and Saeed Jaffrey, compete for supremacy as local councillors. When Beaton died in December 1994, Abbensetts felt he had lost the actor who gave his work a voice. He wrote very little thereafter. His final television work was an episode of BBC1’s medical soap Doctors in 2001. Instead he turned his attention to teaching at the City and Guilds of London Art School and the University of North London. On 22 October 2005 he married Elizabeth (Liz) Miller, née Bluett (b. 1952), a deputy head teacher, but the couple separated a few years later. He had a daughter, Justine, from an earlier relationship with Anne Stewart.

Throughout his writing career, Abbensetts explored issues of race and power, but he was determined to avoid being categorized as a one-theme dramatist. Consequently, his plays were much broader and multilayered in their scope. On many occasions he challenged racial stereotypes by creating strong, believable black characters, sometimes based on people he knew in Britain’s Caribbean community. In doing so, he provided memorable roles for an entire generation of Britain’s established black actors, including Beaton, Mona Hammond, Rudolph Walker, and Munroe. He later explained to Michele Stoby:

In 1992 Abbensetts reflected on his work in 1970s and 1980s: ‘If I’m honest, it is a time that I still miss. I loved it when everything was going well, like when they made Black Christmas’ (Pines, 136). He made his final public appearance on 9 December 2012 at a tribute organized in his honour at the Tricycle Theatre. It featured a reading of his first stage success, Sweet Talk. He died on 24 November 2016 and was survived by his daughter, Justine.