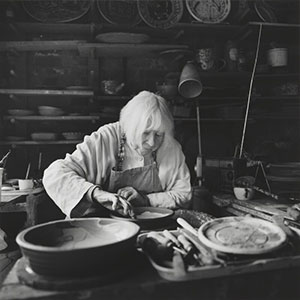 Wondrausch (née Lambert), Mary Angela (1923–2016), potter, painter, and writer on food, was born on 17 December 1923 at 17 Cyril Mansions, Battersea, London, the second child of Harold Charles Lambert (1877–1937), aviation and motor engineer, and his wife, Margaret Desmond, née Montgomery (1885–1971). Her uncle, Percy Edgar Lambert (1880–1913), the motor racing driver, was the first to drive a hundred miles in a motor car in less than an hour. He and Mary’s father set up together early in the motor trade and prospered. Mary’s mother was from an aristocratic Swedish family and considered that she had married beneath herself. She was a distant mother and Mary was brought up by nannies; nevertheless, she had a happy childhood.

Mary was educated at St Mary’s, Ascot, and Poles Convent of the Faithful Companions of Jesus, Ware. At Poles she questioned everything and was excluded from every class, spending her time with the reverend mother, reading The Tatler and painting. Although she rejected the dogma of the church, she loved its ritual and thought that her background in Roman Catholicism gave her an entrée to Renaissance art. All that was expected of her was to be presented at court and to marry, and she left school without qualifications. The outbreak of the Second World War, however, enabled her to envisage a different future for herself. She joined the Women’s Auxiliary Air Force, was injured and quickly invalided out, then enrolled on an interior design course at Kingston School of Art but did little work and spent her time lunching with the Brigade of Guards at St James’s Palace and dancing at the 400 Club in Leicester Square.

On 10 May 1943 Mary married Kenneth John Norris Fyfe, a 22-year-old bookseller, and through him met figures on the London literary scene, including Cyril Connelly, Dylan Thomas, and Peter Quennell. The marriage was annulled and on 16 September 1948 she married Eric Basil Harthan (1900–1972), a probation officer with a passion for the theatre. This marriage too was not successful and she began a relationship with Witold Andrzej Wondrausch (1920–1995), a Polish architect whom she married on 23 January 1954. Through him she met Julian Trevelyan and Mary Fedden, who encouraged her to make collages, which she exhibited with the Women’s International Art Club.

The first two of Mary Wondrausch’s three children were born in her flat in Holbein Mansions, Chelsea, but she found it impossible to climb the stairs with prams and determined to move out of London. In 1955 she bought Brickfields, a house near Godalming, Surrey, with parts dating to the sixteenth century, which became the ‘somewhat still centre’ of what she described as her ‘wayward life’ (Brickfields, 7). Her husband did not join her, and so began the adventure of bringing up children alone in the country. At first she could not even light a fire, but she became attracted to an old-fashioned style of country living, growing and cooking her own food and raising bantams. She started a cookery school for people who did not know how to entertain, insisting that what mattered was attention to one’s guests, not how good one’s food was.

From 1960 to 1975 Wondrausch taught art at Barrow Hills preparatory school, but she became dissatisfied with her role and began to question art itself. She thought that pottery might be easier for boys to understand, and she went to learn it part-time at Farnham art school, attending, with growing enthusiasm, for six years. Stoneware pottery in the style of Bernard Leach dominated, but she experienced a revelation in the Fitzwilliam Museum’s collection of slipwares (lead-glazed earthenware decorated with coloured clays) and Ronald Cooper’s book English Slipware Dishes, 1650-1850 (1968), and she became an avid slipware practitioner.

In 1975 Wondrausch set up the Wharf Pottery at 55 St John Street, Godalming. Her career took off with an order for a thousand hand-lettered ashtrays. She worked with an assistant for twelve hours a day, staggering to the pub at the end of each session for a whisky with Guinness chasers. A year later she moved the pottery to Farncombe. Orders from Liberty and Harrods for commemorative wares in the Queen’s silver jubilee year, 1977, secured her living. In 1983 she acquired an eighteenth-century stable at Brickfields and moved the pottery there, which enabled her to offer residential seminars.

Wondrausch became the doyenne of slipware pottery, a fluent practitioner of the art and its most knowledgeable historian, with an enviable collection of country pots and of pictures taken on visits to European folk potteries. The ideas for her own work came largely from motifs in ceramics and she got no direct inspiration from nature, despite living in a beautiful rural situation. Her book, Mary Wondrausch on Slipware (1986, second edition 2001), combined a practical description of how she worked with a survey of traditional pottery. She was an articulate and compelling lecturer and made a major contribution to the revival of interest in slipware.

Wondrausch’s interest in food was kindled as a child by an encounter with omelettes made from farm-produced eggs, butter, and parsley. In London after the war, she earned a living by cooking for grand people, even though she had never been taught to cook; and Brickfields, with its large garden, hastened her interest. Her desire was always to make pots for food but she regretfully accepted that commemorative plates were her mainstay and was glad of the pleasure they brought. She contributed to the Oxford Symposium on Food and Cookery, the Oxford Encyclopaedia of Food, and Petits Propos Culinaires. She became a vegetarian in the late 1960s.

Wondrausch spent several weeks a year in France and Spain, at first with her children, later alone, where she painted and began her collection of pottery, rugs, tapestries, domestic objects, and kitchen bygones. Brickfields and its collections were featured in magazines, which attracted visitors to the pottery and garden. Publishers declined Brickfields, the illustrated account of her life there, because they were unable to categorize it, and she published it privately in 2004 (with a second edition the following year). In her nineties, she concentrated on painting, mainly still lifes, often with food, reminiscent of Matisse and Cézanne, in collage and gouache. She had a strong sense of colour and composition, but because of her lack of formal training she tended to avoid drawing people.

Wondrausch was eccentric and forthright. She did not own a television, a computer or what she termed ‘a music machine’. Owing to her rebelliousness at school, she was self-educated. She thought herself more intellectual than most potters, but her intellectual interests were hardly reflected in her art and she did not hold in high esteem the more cerebral type of ceramics. She was unconcerned about trends or fashions and was proud to call herself a craftsman. Although her workshop was untidy, she insisted on structure in her life and believed that there could be no freedom without rules. She was made an OBE for services to art in 2000, and the Craft Potters Association made her an honorary fellow in 2005. She died on 26 December 2016, and her funeral took place at St Nicholas’s Church, Compton, on 6 January 2017. She was survived by her three children, Clio, Claudia, and Hugh.