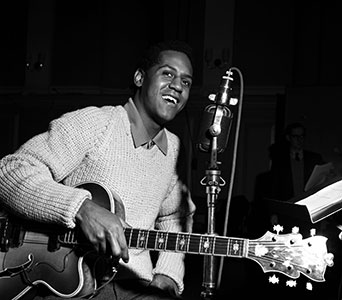 Ford, Emile [real name (Michael) Emile Telford Miller; also known as Emile Sweetnam] (1937–2016), singer, musician, and sound engineer, was born on 16 October 1937 in Castries, St Lucia, the son of Frederick Edward Miller, later a high-profile member of the Barbadian parliament who served as minister for health and social services, and his wife Madge, née Murray, a talented soprano who toured around the Caribbean. Not long after his birth his parents divorced. His father married Mildred Lashley, a nurse, and among their children (Emile’s half-siblings) was Dame Billie Antoinette Miller (b. 1944), also a prominent Barbadian politician who served as deputy prime minister under Owen Arthur. Emile’s mother married Rudolph Sweetnam, a civil servant, and had four more children.

A passion for music ran through Emile’s veins: his maternal grandfather, Louie Murray, had been the founder of the St Lucia Philharmonic Band, the first orchestral group on the island, while his great-uncle had been a professional violinist, also performing around the West Indies. Emile’s mother—after her performing career—in 1954 set up a talent show titled ‘Musicians of the Future’, at St Lucia’s Clark’s Theatre.

Two dramatic fires devastated Castries when Emile was ten and thirteen respectively, destroying large parts of the city. However, St Mary’s College, the Catholic boys’ school where he studied as a child, remained unscathed. In 1955, after his graduation, he set off with his mother and half-siblings to London. They left St Lucia not necessarily for a better life but for better musical opportunities: as a respected, influential, and financially solvent family, they had not been struggling on the island, and yet the musical opportunities were few.

Arriving in London, Emile and his family found that settling in was not easy; and they encountered open hostility on account of their Afro-Caribbean descent. However Emile persevered, securing a place on a music course at Paddington Technical College. By this time he had developed synaesthesia, a sensory condition causing him to experience sound in terms of colours and patterns. Although it is commonly regarded as a disorder, he, on the other hand, saw it as an asset—a way for him to develop a sensitive and intuitive relationship with music. A natural with instruments, he began to learn piano and drums, and later claimed to have mastered the guitar in just a week. He also started to design and demonstrate his own sound equipment. Aged twenty, he first publicly entered show business under his pseudonym Emile Ford, at the Buttery, Kensington, and made appearances on television shows such as the Pearl Carr and Teddy Johnson Show, Oh Boy!, and The Music Shop.

The following year, in January 1959, Ford teamed up with two of his half-brothers, George Sweetnam-Ford on bass and Dave Sweetnam-Ford on saxophone, together with lead guitarist Ken Street, drummer John Cuffley, and keyboardist Alan Hawkshaw, to form Emile Ford and The Checkmates. Following appearances on television’s Sunday Serenade, in July 1959 they won the Soho Fair talent contest. Ford had become a burgeoning producer, too—though not everyone took his ambitions seriously. Consequently he and his group turned down a potentially lucrative recording contract with EMI in favour of a smaller company, Pye, which allowed Ford the creative control he craved. The risky decision proved a wise one when the band’s first, self-produced single, ‘What Do You Want to Make Those Eyes at Me For?’—a cover of a 1917 recording by vaudeville singer Billy Murray and duo partner Ada Jones—made it to the top of the charts. It would enjoy a six-week reign at number one, and Ford became the first black British male artist to sell more than a million copies of a single.

Ford’s career with The Checkmates continued until 1963. In February 1960 he secured a management contract with talent agent Leslie Grade and his group was voted best new act of 1960 by readers of the New Musical Express. Their singles ‘On a Slow Boat to China’ and ‘Counting Teardrops’ reached numbers three and four in the charts in February and December 1960 respectively. However, other singles fared less well, and after the band switched labels to Piccadilly in 1961 neither ‘Half of My Heart’ nor ‘I Wonder Who’s Kissing Her Now’ reached the top forty. Nor did the band’s LPs, New Tracks with Emile (1960) and Emile (1961), enter the album charts.

Ford described himself as an ‘accidental’ pop star (Darlington, ‘The “Accidental” Pop Star’): his real interest was in sound engineering, and increasingly it was not his performances on stage that excited him but the opportunities to use his technical expertise behind the scenes. He was the first engineer to create a backing track system for the stage, in Morecambe, Lancashire, in June 1960 (much to the displeasure of the Musicians’ Union), helping to pave the way for what became karaoke. He regularly took his own PA system on the road with him and even installed technology to facilitate rehearsals on board the band’s tour bus.

Following the disbandment of Emile Ford and The Checkmates, Emile’s half-brothers George and Dave teamed up with drummer Barry Reeves and capitalized on the 1960s trend for psychedelia, combining it with Motown-style soul to create a group called The Ferris Wheel. Ford, on the other hand, intentionally left the performance industry altogether. In 1969, after a brief stint as a solo artist, he fulfilled a childhood dream to set up his own recording studio in Barbados. By the 1970s he had moved to northern Sweden, where he continued to conduct acoustic experiments and patented an open-air playback system that he had invented, known as the Liveoteque Sound Frequency Feedback Injection System. While he might have faded from the public eye, his success behind the scenes never ceased. In the 1990s he relocated again—this time to California—and continued to market his sound equipment and post-production services.

Ford married first, in September 1959 at the Roman Catholic church in Hylton Castle, Monica Clery, and secondly, on 17 August 1978 at Bradford register office, Valerie Patricia Stack, a former model and briefly a motor racing driver (winner of the British Women Racing Drivers Club’s award for best newcomer in 1976) who collaborated with him in his sound engineering business. Ford died peacefully of natural causes in London on 11 April 2016, leaving behind three sons and four daughters. A commemorative plaque from BBC radio, placed at 10 Kensington Church Street, London, in 2017, described him as a ‘sound scientist’—and indeed Ford was something of an unsung hero in the industry.