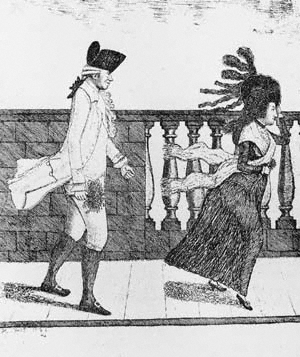 by John Kay, 1785 [Dr James Graham Going Along the North Bridge in a High Wind]

Graham, James (1745–1794), quack, was born the son of William Graham (b. 1710), saddler, and his wife, Jean (b. 1715), in the Cowgate, Edinburgh, on 23 June 1745. He studied medicine in the heyday of Edinburgh University under Monro primus, Cullen, Black, and Whytt, but, though later calling himself Dr Graham, he did not take a degree. In 1770 he began practice in Pontefract, Yorkshire, and in the same year married a Miss Mary Pickering; they had three children (of whom a son and a daughter survived him). Graham moved to the American colonies, and began to specialize in New York as an oculist and aurist. He also went to Philadelphia, where he grew familiar with Benjamin Franklin's electrical discoveries. In 1774 he returned to England, to practise first in Bristol and then in Bath, developing the singular cures that made his name. He moved to London in 1775 and established himself in Pall Mall, before returning in October 1776 to Bath, where he met, treated, and hobnobbed with the historian Catharine Macaulay. She afterwards married his younger brother, William.

Concentrating on valetudinarians who were suffering from newly fashionable ‘nervous disorders’, Graham's treatments included so-called aethereal and balsamic medicines, milk baths, dry friction, and a technique of placing patients either on a 'magnetic throne' or in a bath through which electrical currents were passed. Although he was attacked as a quack, his cures won accolades. In the winter of 1778–9 he visited Newcastle to superintend the construction of some glasswork he required for his next venture in London. In the summer of 1779 he met Franklin in Paris, and visited Aix-la-Chapelle, where he claimed he received testimonials from many well-born patients, including Georgiana, duchess of Devonshire. That autumn he settled in what he designated his Templum Aesculapium Sacrum, which was housed in the Adelphi Buildings, on the riverside by the Strand; from there he advertised his wonderful nostrums and cures, including earth-bathing. A succession of self-promoting pamphlets, including Sketch of the Plan, &c. of the Temple of Health! (1780), described his house and apparatus, boasting they had cost him at least £10,000. A Sketch or Short Description of Dr Graham's Medical Apparatus (1780) explained how the temple was decked out with elaborate electrical machines, jars, conductors, and an 'electrical throne' insulated on glass pillars, together with chemical and therapeutic apparatus. Statues, paintings, stained glass windows, music, perfumes, and gigantic ‘footmen’ were among the attractions in this multimedia spectacle. In the 'great Apollo apartment' he displayed his apparatus, conducted consultations, sold his medicines, and delivered health advice, including his 'Lecture on the generation, increase and improvement of the human species', published in 1780. This kept him in the public eye for the next decade, as he explained the secrets of a happy sex life—productive of healthy living for individuals and the repopulation and rejuvenation of the nation at large. To illustrate his performance he may have displayed barely draped young models as Hebe Vestina, or goddesses of health, including, according to subsequent legend, Emma Lyon, later to become Lady Hamilton.

Graham also promised relief from impotence and sterility to those who hired his 'celestial bed', which was 12 feet long by 9 feet wide and 'supported by forty pillars of brilliant glass of the most exquisite workmanship'; it was also engraved with the legend, 'Be fruitful, multiply and replenish the earth', and linked up to 15 cwt of magnets and electrical machines. Apparently he charged £50 a night for the privilege of slipping between the sheets. The temple attracted large audiences, the ladies going 'incog', according to Henry Angelo. Sightseers included Horace Walpole, who remarked on 23 August 1780 that Graham's was 'the most impudent puppet-show of imposition I ever saw, and the mountebank himself the dullest of his profession, except that he makes the spectators pay a crown apiece' (H. Walpole, Correspondence, ed. W. S. Lewis, 33, 1965, 217). Graham became a celebrity, and on 2 September 1780 George Colman the elder produced at the Haymarket Theatre an extravaganza, The Genius of Nonsense, in which John Bannister appeared as Emperor of the Quacks, mimicking Graham's absurdities. The farce had received twenty-two performances by July 1781. Various squibs and burlesques satirizing Graham were also published, notably Il convito amoroso, assumed to be by Graham himself.

In the spring of 1781 Graham was forced to sell up and move to Schomberg House, Pall Mall, where he operated at lower charges. On 25 November 1782 his property was seized for debt, being advertised for sale on 20 December and on subsequent days. On 6 January 1783 he inserted a notice in the Public Advertiser that he would that day pay 20s. in the pound on all his lawful debts. He continued to lecture on sexual health, and in March 1783 he informed the public that the 'high priestess' at his temple read lectures to ladies, and that 'the rosy, athletic, and truly gigantic goddess of Health and of Hymen, on the celestial throne', assisted in the course of the reading of the lecture.

Refused a licence to practise in Norwich, on 29 July 1783 Graham delivered his lecture on generation at Edinburgh in Mary's Chapel, Niddry's Wynd. When a further performance was prohibited on the grounds of indecency, Graham continued to offer it for some days in his rooms, publishing in his defence An appeal to the public, containing the full account of the ignorant, illegal, and impotent proceedings of the contemptible magistrates of Edinburgh. On 6 August he was committed to the Tolbooth to be tried for 'his late injurious publications in this city'; he retorted with A full circumstantial and most candid state of Dr. Graham's case, giving an account of proceedings, persecutions, and imprisonments, more cruel and more shocking to the laws of both God and man than any of those on record of the Portuguese Inquisition. On 10 August he preached in the Tolbooth to the prisoners, entertaining his audience and the prison chaplain with 'a mellow bottle and a flowing bowl' (Caledonian Mercury, 11 Aug 1783). On 19 August he was released on bail for 300 marks Scots (ibid., 20 Aug 1783). After he continued to lecture in a large room in Bailie Fyfe's Close, he was sentenced on 22 August to a fine of £20 sterling, which was paid by his audience. Shortly afterwards he left Edinburgh and lectured in various towns, with occasional prohibitions. In the autumn of 1783 Mrs Siddons's youngest sister, Mrs Curtis, read lectures on the state and influence of women in society at Graham's house in London before his own lectures followed. In December he gave out that he possessed the secret of living to at least the age of 150. In 1786 he was in Paris and afterwards at Newcastle; 1788 found him in the Isle of Man. From around 1783 he played down the use of 'medical electricity' in favour of natural cures. In 1789 he informed audiences in Bath that he regretted the extravagances of youth and a warm imagination uncurbed by Christianity, but that he was passing into 'the mild serenity of an evening natural, and of an autumn intellectual sun'.

In 1790 Graham's Short treatise on the all-cleansing, all-healing, and all-invigorating qualities of the simple earth gave the fullest description of the techniques of earth-bathing he had practised from the late 1770s. Mud-bathing exemplified his faith in simple cures and the healing powers of nature. Henry Angelo described one of his performances:

After making his bow he seated himself on the stool; when two men with shovels began to place the mould in the cavity: as it approached to the pit of the stomach he kept lifting up his shirt, and at last he took it entirely off, the earth being up to his chin, and the doctor being left in puris naturalibus. He then began his lecture, expatiating on the excellent qualities of the Earth Bath, how invigorating etc. quite enough to call up the chaste blushes of the modest ladies.

From the mid-1780s, Graham became a religious enthusiast, defending the divinity of Jesus Christ against Unitarians such as Joseph Priestley. From 1787 he styled himself 'the Servant of the Lord O.W.L.' (Oh, Wonderful Love), and dated his publications 'in the first year of the New Jerusalem Church'. Wandering round the country as a preacher, he explicitly harmonized his new theology with his vegetarianism. In 1790 he claimed that upon the illness of George III he had hurried from Liverpool to Windsor, to give his opinion to the prince of Wales, who (Graham stated) confessed he too would suffer in the same way unless he married a certain princess. Robert Southey saw this 'half knave, half enthusiast' twice, once in his mud-bath. He recorded that Graham 'would madden himself with opium, rush into the streets, and strip himself to clothe the first beggar he met' (Commonplace Book, 4.360). At Edinburgh he was for some time confined in his own house as a lunatic.

Graham's last pamphlet opens with an affidavit made on 3 April 1793, that from the last day of December 1792 to 15 January 1793 he neither ate nor drank, nor took anything but cold water, sustaining life by wearing cut-up turfs against his naked body and by rubbing his limbs with his own nervous aethereal balsam. He died suddenly, at his house opposite the Archer's Hall, Edinburgh, on 23 June 1794, and was buried in Greyfriars churchyard, Edinburgh.

Though an exhibitionist and entrepreneur, a self-confessed eccentric, and possibly finally mad, Graham was also a man of significant medical ideas. He opposed flesh-eating and excess in food and drink, and advocated cold bathing, fresh air, sleeping on hard beds, and other aspects of a Spartan regime. Hostile to ‘luxury’, he asserted that illness was caused by wearing too much clothing, and he wore nothing woollen. In particular he believed that energetic sexual performance was the secret and the sign of a healthy existence. While advocating the use of erotica as sex aids, he was a fierce critic of practices he regarded as depraved, in particular prostitution (though wives could learn from whores the erotic arts) and masturbation—he stated that 'every act of self-pollution is an earthquake—a blast—a deadly paralytic stroke' (J. Graham, Lecture on … Generation, 1780, 20). Though often treated by historians as a mere charlatan, in truth Graham was an enthusiast whose views, albeit carried to extremes, were actually highly typical of his age.