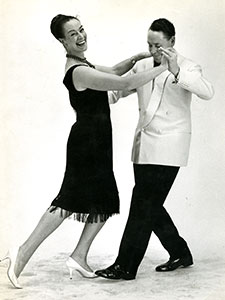 Spencer [née Hull], Margaret Annie (Peggy) (1920–2016), dance teacher and choreographer, was born on 24 September 1920 at 45 West Street, Bromley, Kent, the daughter of James Arthur (Jim) Hull (1893–1958), master carpenter, and his wife, Margaret Mary (Maggie), née Williams (1899–1978), who had come from Cork to England after the 1916 Easter rising to work as a cook. At the time of her birth registration the family lived at 6 Florence Road, Bromley. It must have seemed unlikely to Jim and Maggie Hull that their tall, gawky child would ever have anything to do with the glamorous world of ballroom dancing. Indeed her first passion was for politics: while still at secretarial college she worked as a volunteer shorthand typist for the leading Labour MP Herbert Morrison, and her ambition was to stand for parliament herself. Those plans faded when in 1939 she met a young surveyor, Jack Victor Herbert Spencer (1916–1993), son of Victor Hugo Spencer, box manufacturer. After his divorce, they married at Lewisham register office on 29 March 1944, by which time Jack was a corporal in the Royal Air Force. They had two children, Helena and Michael.

Jack’s older brother, Frank William Spencer (1903–1988), a ballroom world champion with a special interest in formation dancing, had also joined the forces. While he was away with the army, Peggy helped her sister-in-law Sylvia to run the family music shop in Sydenham, which piqued her curiosity about dance. A moment of revelation came during the blitz: after long nights spent in an air-raid shelter under a cinema, to help pass the time she decided to teach some teenage boys how to foxtrot and quickstep. Keeping one step ahead of her captive pupils with the training guides, she discovered the pleasure dance could give and the delight she took in teaching it. Team contests boosted the appeal of these impromptu classes, which spread rapidly to pubs and local halls; and when her brother-in-law returned from the front, he too saw huge potential, not only in the format but also in Spencer herself. Divorcing their spouses in 1947, Peggy and Frank became life partners, on and off the dance floor. Though many assumed the couple married early on, they were only able to do so on 27 March 1968 at Bromley register office, eight years after the law had been changed to allow marriage with a living former spouse’s sibling.

The intervening years saw the Spencers’ business base, the Royston Ballroom, grow into an enduring success, despite snobbish mockery of its dowdy location above a working men’s club in Penge, south-east London. From 1950 Peggy’s formation teams regularly scooped the silverware on BBC Television’s new Come Dancing spectacular, and as the show’s mainstay she soon found herself a popular television personality, making guest appearances as the ‘queen of ballroom dance’ on the children’s magazine Blue Peter and a host of other programmes. Meanwhile the fashion style she dictated to her female pupils, based on the Christian Dior ‘new look’—bouffant hair, gauzy petticoats, sequins, and shoulder-straps—became all but obligatory in ballrooms around the world. Yet the couple’s unstuffy openness to new trends in music, whether rock ’n’roll or Latin, ensured that they never sank into nostalgia.

Spencer’s gifts as a teacher and choreographer were of a rare order. Her focused enthusiasm and instinct for pitching clear instructions at precisely the right level allowed her to train flat-footed amateurs as effectively as champions. Her pupils ranged from Grace Kelly’s princely children Caroline and Albert in Monaco, to Rudolf Nureyev, whom she taught to waltz and tango for Ken Russell’s biopic Valentino (1977). In the Beatles’ film Magical Mystery Tour (1967) she choreographed a memorable scene on and about a massive white staircase, to the tune of ‘Your Mother Should Know’. Paul McCartney had told her the song would be a waltz and she had planned accordingly. When it turned out to have four rather than three beats to the bar, the unflappable Peggy simply improvised an extra kick per measure for the dancing Beatles, to marvellously quirky effect. In 1970 she and Frank published the first of several best-selling ‘ballroom bibles’, The Joy of Dancing.

Frank’s death in 1988 briefly stemmed Spencer’s work flow, though she went on to compére an annual ‘Ballroom Blitz’ at the Royal Festival Hall, making a point of instructing absolute beginners, as a way of staying grounded. Then in 1997, the year of her official retirement from teaching, she created a ten-minute sequence for Elton John’s fiftieth birthday party. Fusing ballroom, Latin, and rock, this formed the kernel of the dance musical Burn the Floor, which (with her active support) came to be staged on Broadway, in the West End, and more than a 100 countries worldwide. In 1999 she was bitterly disappointed when, despite her personal plea to the BBC’s director of programmes, Alan Yentob, the plug was finally pulled on Come Dancing. Although she felt vindicated by the corporation’s decision five years later to revive it in glitzy, celebrity format as Strictly Come Dancing, she refused an offer to rejoin the presentation team, considering herself too old to take part. None the less, she continued until her ninety-third year to teach at her local community centre in King’s Lynn, Norfolk, whither she had retired to be near her daughter, Helena. Her son, Michael, also took up the trade, running his mother’s old classes in Penge until his death in 2003.

Given that Peggy’s formation teams twice entertained the queen’s Christmas ball guests at Buckingham Palace, it was no surprise when the Spencers were both appointed MBE in 1977. In 1993 she was certainly surprised when Michael Aspel, big red book in hand, made her a subject of the much loved television documentary show, This Is Your Life. She also won an unsurpassed eight Carl Alan awards, the Oscars of the dance-theatre realm, seven with Frank and one by herself. In her retirement she served (from 2004) as president of the Imperial Society of Teachers of Dancing, and as deputy lady mayoress of King’s Lynn. She died peacefully on 25 May 2016 ‘wearing her sparkly shawl and sparkly gloves, and … her favourite perfume’ (Lynn News, 26 May 2016), at Millbridge care home, Lynn Road, Heacham.