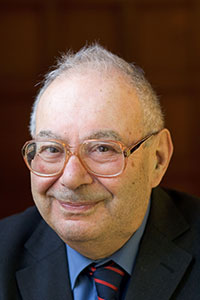 Blue, Lionel (1930–2016), rabbi, broadcaster, and author, was born on 6 February 1930 at the Mothers’ Hospital in Hackney, London, as Lionel Bluestein, the only child of Harris (Harry) Bluestein, later Harry Blue (1890–1965), tailor, and his wife Hetty, or Hettie, née Goldstein (1903–1994), legal secretary. His parents were both born in the East End, the children of Russian Jewish immigrants, and had married in London in 1923. At the time of his birth registration the family lived at 111 Bishops Road, Bethnal Green. The family name was changed by deed poll in 1944. His parents were observant Jews but he later claimed to have lost his religious faith aged five when a prayer beseeching God to remove Adolf Hitler and Oswald Mosley went unanswered. During the Second World War he was evacuated, initially to Devon, and he later claimed to have moved sixteen times during that period. After returning to London he was educated at Hendon Grammar School before national service in the army. It was then that his struggle with his as yet unacknowledged homosexuality led to a life crisis, a nervous breakdown, and early discharge.

In 1950 Blue took up his place to read modern history at Balliol College, Oxford, still struggling with his closet homosexuality, and, in 1951, distraught after a failed attempt to make love to his girlfriend, a fellow student, Joanna Hughes, he stumbled into a Quaker meeting. There, unexpectedly, he found some kind of an answer to his doubts, having been much affected by the quiet spirituality of the local farmers: ‘I actually thanked God for my accursed problems. “I know now,” I said, “that they are my spiritual capital, disguised blessings, which could help other poor sods like myself”’ (My Affair, 29).

Around this time Blue toyed with conversion to Christianity—a period later recounted in My Affair with Christianity (1999). However, accompanied by considerable personal doubt and struggle, he renewed his commitment to Judaism, partly as a result of being strongly influenced by Sir Victor Gollancz’s A Year of Grace. That anthology had been compiled between Gollancz’s own nervous breakdown in 1943 and publication in 1950. And, though Gollancz tended to describe himself as a Christian socialist and Christian humanist, he also continued many Jewish practices at home. Like Blue, he was torn. Blue credited A Year of Grace for having infected him with spirituality ‘like measles’, and for steering him away from an anti-religious attitude (Blue, The Godseeker’s Guide, 136). Gollancz’s own preferred religious humanism combined a belief in man’s creative potential with ‘man as a fellow-worker with God’, a belief Blue shared, though he called God Fred.

After Blue graduated in 1953 he took a second BA, in Semitics, at University College, London, and then went to Leo Baeck College, London, in 1956, which had just been founded by Rabbi Werner van der Zyl to train students for ministry in Liberal and Reform synagogues. Blue was one of the first two students, and was ordained as a rabbi in 1960, when he became minister to the Settlement Synagogue, Stepney, the old East End ‘settlement’ founded by Basil and Rose Henriques, with Lady Henriques still very much a constant presence. He also began serving the Middlesex New Synagogue in the same year. In 1963, at the invitation of Lily Montagu, he became European director of the World Union for Progressive Judaism but left to become, from 1967, a lecturer at Leo Baeck College, where he taught for almost fifty years, until 2013.

For many years Blue was one of two teachers of the practical rabbinics course at Leo Baeck College, a programme designed to inform young rabbinic students of what not to do as inexperienced rabbis. His classes tended to be amusing, with all sorts of useful ‘dos and don’ts’, including an instruction most of his pupils never forgot—not to put one’s prayer book down on the coffin during a cremation service and then press the button for the coffin to slide away. His guidance for new congregational rabbis on getting to know local Christian clergy was spot-on, and his ecumenical work in teaching, preaching, and broadcasting was highly instrumental in encouraging most Christian training colleges, from Church of England to Roman Catholic to nonconformist, to teach Judaism as a core part of their programmes.

From 1971 to 1988 Blue was convenor of the Beth Din (ecclesiastical court) of the Reform Synagogues of Great Britain (having chosen ‘convenor’ rather than ‘clerk of the court’ as his title). He brought humanity to the court’s proceedings, and was notable for involving counsellors, social workers, and others in its proceedings. In the mid-1970s Rabbi van der Zyl invited him to help in the production of a new Sabbath and daily prayer book for the Reform movement; the result was that he jointly edited Forms of Prayer (1977) and its subsequent editions including for the High Holydays (1985). These translations eschewed the ‘thee’ and ‘thou’ of previous translations, introduced a selection of contemporary readings inspired by A Year of Grace, and made the prayer books a better resource for personal contemplation—always dear to his heart—and more contemporary in language.

Blue’s beginnings as a broadcaster in 1967 were accidental. He had made a markedly accomplished contribution to a BBC radio programme about a Jewish congregation, which led to an invitation to contribute to ‘Thought for the Day’, an early morning slot on BBC Radio 4’s Today programme. Although he had been advised by a senior rabbi to talk about the ‘Jewish problem’, he recognized that his real task was ‘to help people get out of bed in those horrid winter months and give them enough spiritual sympathy that they don’t want to dive back under their duvets again’ (BBC Norfolk, 31 Oct 2007). He made an immediate impression, and became a regular contributor to the programme, for almost thirty years, as rabbi to the nation. One of the best loved religious leaders of his generation in Britain, he appeared on many other radio programmes on BBC Radio 4 and Radio 2, while in 1989 he devised and presented a six-part television series, In Search of Holy England, for Channel 4. His broadcasting struck a chord with many people. It also led him to realize just how many lonely people there were ‘out there’ whom he could, with carefully chosen words, reach and touch.

Blue was known for his humour, but analysing his broadcasting and his writing leads any commentator to observe that his jokes were always tied to a serious, often profound, point, with considerable spiritual insights. He told jokes because they allowed people to laugh rather than cry, and then stop and think about life and death, the nature of humanity, our relationship with the universe, and our relationships with each other. Some of it was profoundly Jewish. Some went well beyond. As a complex, somewhat depressed, man himself, he knew that humour could be used to provide insights and understanding, and that laughter allowed lonely people to feel connected with the speaker, even if only for a brief moment.

Blue’s knack for conveying religious teachings in an accessible way also found expression through regular contributions to the Catholic newspapers The Universe and The Tablet, and a series of books, including A Backdoor to Heaven (1985), Bolts from the Blue (1986), Bedside Manna (1991), Tales of Body and Soul (1995), and The Godseeker’s Guide (2010). He published two volumes of autobiography, several anthologies of jokes, and a number of cookery books featuring his somewhat unusual recipes (such as chicken, cranberries, and Coca-Cola). His food could be wildly eccentric, and he was famous for having hosted a dinner party where he let a treacle tart cool in the oven and thereby rendered his dinner guests incapable of speech with temporary lockjaw. He listed cooking as one of his recreations, alongside window shopping, package holidays, and visiting monasteries, but he was also an inveterate collector of high-class junk, and lived in overcrowded rooms with unlikely treasures. He was awarded the Templeton prize in 1993, made an OBE in 1994, and given honorary doctorates by the Open University and the University of Durham.

In 1980 Blue was the first British rabbi to come out publicly as gay, and he subsequently talked about his own and others’ sexuality with much humour and compassion. He had two or three significant relationships in his life and eventually found happiness in his partnership with Jim Cummings, an engineer with whom he lived from 1981 (the year he published Godly and Gay) until Cummings’s death in 2014. His courage in ‘coming out’ came to be barely remembered by the time of his death, when homosexuality was no bar to anything, and his use of humour was much copied. But he was the original gay rabbi, the first clergyperson to use humour to elucidate profound ideas in broadcast radio, the first to show that one could be depressed, sick, and ageing, and still be an inspirational friend to many. He changed how people thought of gays and Jews, and as he reached out to the nation, a rabbi of the most eccentric kind, he made Judaism approachable and Jewish humour a new positive in broadcasting.

Blue was diagnosed with cancer in 1997 but its spread was halted by radiotherapy; he also took medication for epilepsy and had two heart bypass operations. In later life he developed Parkinson’s disease. He died, of pneumonia, at the Royal Free Hospital, Camden, London, on 19 December 2016. The following day BBC Radio 4 broadcast a recording of him presenting his own (typically wry and playful) obituary. A memorial service was held at the West London Synagogue on 8 May 2017.