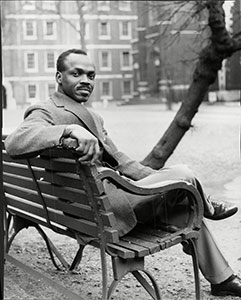 Braithwaite, Eustace Edward Adolph Ricardo [known as E. R. Braithwaite] (1912–2016), author, educationist, and diplomatist, was born on 27 June 1912 in Queenstown, British Guiana, one of five children of Charles Edwardo Braithwaite, mining engineer and gold and diamond dealer, and his wife Elizabeth Martha, née Greene. His parents were both educated at Oxford and encouraged his ambition: ‘In all the days and years of growing up from childhood, nobody, not a single one, had ever told me that the white man would prevent or interfere with what I wanted to do, or be’ (Reluctant Neighbours, 1972, 19). Known as Rick or Ricky, he attended Queen’s College, Georgetown, which was modelled on the English public school system, before studying engineering at the City College of New York. After working at an oil refinery in Aruba, off the coast of Venezuela, he moved to Britain to pursue postgraduate study at Gonville & Caius College, Cambridge, arriving shortly after the outbreak of the Second World War. After training with the University Air Squadron he volunteered for the Royal Air Force, and served as a wireless operator with Transport Command. On demobilization he returned to Cambridge, and completed his master’s degree in physics in 1949. Later he received honorary doctorates from Oxford University and the University of Paris-Sorbonne.

Braithwaite is best known for his autobiographical fiction To Sir, With Love (1959), which begins with his search for work as an engineer in post-war London. During his service in the RAF he had never encountered discrimination, but for eighteen months afterwards he was turned down for jobs for which he was eminently qualified, because of his skin colour. Remembering the celebrations on each royal visit to British Guiana, he observed: ‘Yes, it is wonderful to be British—until one comes to Britain’ (Braithwaite, To Sir, 41). The only job he could get was in St George-in-the-East secondary modern on Cable Street (the novel’s Greenslade), which was so run down that its charismatic headmaster, Alex Bloom (Alex Florian in the novel), was allowed to foster a radical, democratic ethos: there was no corporal punishment or detention, and students wrote weekly assessments of their classes. To Sir, With Love records Braithwaite’s initial shock at this pedagogy (the antithesis of his own schooling), at the poverty in the East End, and at the casual racism of his pupils. The novel charts his own education about class inequality as Braithwaite, ‘Ricky’, learns to ‘love them, these brutal, disarming bastards’ (ibid., 196). When he left the school the students gave him a package marked ‘To Sir With Love’, which contained cigarettes each initialled ‘E.R.B.’.

To Sir, With Love also tells the story of Ricky’s love affair with a white English teacher, Gillian—the hostility they face in public and from Gillian’s father who objects to the prospect of ‘“coloured grandchildren”’ who will ‘“belong nowhere”’ (Braithwaite, To Sir, 203). The film version of To Sir, With Love (1967), directed by James Clavell and starring Sidney Poitier, omitted this important strand of the story owing to Hollywood’s reluctance to represent ‘interracial’ romance. Although it was a huge success, Braithwaite told actor and director Burt Caesar: ‘I detest the movie from the bottom of my heart’ (Braithwaite and Caesar, ‘To Sir, With Love Revisited’). It is not known on whom the character of Gillian was based. Braithwaite married his only spouse, Sybil Allan (b. 1923), a white English woman then working as a shorthand typist, daughter of Thomas Rule Allan, a driving instructor with the Royal Army Service Corps, in Romford on 23 December 1944; they had five children before divorcing in the 1950s. He did not write about his family life in any of his autobiographical books.

After eight years as a teacher Braithwaite was seconded to London county council’s department of child welfare in 1958 as an adviser. Paid Servant (1962) records his frequently frustrating experience in this role owing to the prejudice of many welfare officers, particularly against mixed-race children. Braithwaite considered that the obsession with colour hindered the possibility of finding suitable foster homes. The book focuses on four-year-old Roddy, whose case notes label him ‘coloured’, father unknown. Braithwaite finally finds a loving white family to foster Roddy despite discouragement from his supervisor. At the end of the book Braithwaite rejects the assumption that the ‘black’ cases need ‘special’ treatment: ‘“My people” were not only the black ones; they were all the unfortunates temporarily down on their luck’ (Braithwaite, Paid Servant, 184–5).

Braithwaite’s third book about race and class in post-war London, Choice of Straws (1965), was a thriller narrated by a white working-class youth, Jack, who is both attracted to jazz and deeply resentful of the ‘Spades’ in Britain. When he and his twin brother attack a young West Indian in the East End who fights back, Jack stabs him: the novel ends without a successful prosecution of the murder. Much of the narration evokes Jack’s ambivalent feelings for a middle-class black British student, Michelle, with whom he gradually falls in love; when she rejects him he reverts to his earlier racist beliefs. The novel is dedicated to Michelle, one of Braithwaite’s daughters.

The success of To Sir, With Love, which was translated into more than twenty languages, resulted in a series of prestigious diplomatic posts. He was human rights officer at the World Veterans Federation based in Paris and education consultant to UNESCO, also in Paris. In 1965 Braithwaite became the head of mission for Guyana at the United Nations in New York and subsequently served as Guyana’s ambassador to Venezuela. During this period he produced the first of his groundbreaking travel books. A Kind of Homecoming (1962) recorded Braithwaite’s delight and sometimes disappointment on first setting foot in Africa, during a period of momentous historical change. At the end of his tour of Guinea, Sierra Leone, Liberia, and Ghana Braithwaite concluded: ‘I do not subscribe to the idea of so-called Negro literature any more than I do to “white” literature’ (Braithwaite, A Kind of Homecoming, 257).

Reluctant Neighbours (1972) is based on a conversation between Braithwaite and a white commuter on a train to New York. In the course of this journey he looks back in anger at his experience in London and reflects on the differences between racial prejudice in the UK and the USA. Although To Sir, With Love had been banned in South Africa, the prohibition was lifted in 1973 and Brathwaite was given a special visa which allowed him to travel freely in apartheid South Africa. Honorary White (1975) is a lacerating account of the effect of white supremacy and his anguish at his own privileged status.

After his career as a diplomat Braithwaite became an academic. He taught at New York University, and was writer-in-residence at Florida State University (1976–7) and at Howard University (1998–2004). He died on 12 December 2016 at Shady Grove Medical Center, Rockville, Maryland, USA. He was survived by his companion, Genevieve Ast, and two sons from his marriage (three of his children having predeceased him).

Braithwaite’s chief legacy is as a writer who exposed injustice with profound humanism. To Sir, With Love, Paid Servant, and Choice of Straws provide the most insightful chronicle of what later became known as the Windrush generation from one who lived through it. A remarkable aspect of these London books is the way they tell us as much about the white English as they do about the West Indian experience of coming to the ‘mother country’. This makes it all the stranger that at the time of his death Braithwaite had been largely overlooked in histories of post-war British literature. He was also largely absent from the annals of Commonwealth and post-colonial literature. Nonetheless, his work influenced several subsequent writers, including Hanif Kureishi, Caryl Phillips, Kwame Kwei-Armah, and Roy Williams.