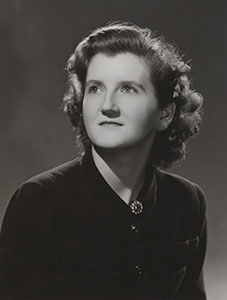 Rhodes [née Elphinstone], Margaret (1925–2016), aristocrat and courtier, was born on 9 June 1925 at 6 Upper Brook Street, Mayfair, London, the fifth and youngest child of Sidney Herbert Elphinstone, sixteenth Lord Elphinstone (1869–1955), landowner and public servant, and his wife, Lady Mary Frances Bowes-Lyon (1883–1961), second daughter of the fourteenth earl of Strathmore and Kinghorne, and an elder sister of Elizabeth, wife of George VI, who, as Prince Albert, duke of York, was her godfather. She was raised at the Elphinstones’ Scottish seat, Carberry Tower, near Edinburgh, enjoying a traditional Scottish aristocratic upbringing. She was placed in the care of Clara Knight, later nanny to Princess Elizabeth and Princess Margaret. She saw a lot of her royal cousins, being less than a year older than Princess Elizabeth. She was often at Glamis Castle, and at Birkhall, home of the duke and duchess of York, so much so that the latter described her as her third daughter. In later life she spoke of being a playmate to Elizabeth, ‘mostly playing at being horses. It involved a lot of neighing and cantering and galloping’ (Today, BBC Radio 4, 19 April 2006). At the beginning of the Second World War in 1939, the princesses being kept at Birkhall, Margaret was sent over to keep them company.

Margaret Elphinstone attended a finishing school in Oxford, and completed a secretarial course in Surrey. During the war she lived partly in Chelsea and later as a lodger at Buckingham Palace, with her brother Andrew. She joined the Women’s Royal Naval Service, but, although only eighteen, was moved to the Secret Intelligence Service (MI6), and worked in what was described as ‘passport control’ near St James’s underground station. Her department organized the work of secret agents in the Near East. During the war her elder brother, John (1914–1975), was a prisoner of war in Colditz Castle.

On VE night, 8 May 1945, Margaret Elphinstone was part of the group of about sixteen who accompanied the princesses into the crowds to celebrate victory, dancing the conga, the Lambeth walk, and the hokey-cokey with the crowds. This she described as ‘a unique outburst of personal freedom’ for the princesses, ‘a Cinderella moment in reverse’ (Rhodes, 68). The expedition was later filmed as the romantic fictional comedy, A Royal Night Out (2015), which was promoted in a documentary in which Margaret was propelled around London in an open car, revisiting the sites explored by Princess Elizabeth and Princess Margaret on VE night. In November 1947 she was one of eight bridesmaids to Princess Elizabeth at Westminster Abbey, in dresses designed by Norman Hartnell, later saying that the occasion ‘brightened our austerity-ridden post war world’ (ibid., 70).

Seeking new employment, Margaret Elphinstone went to work for the European Movement (founded by Duncan Sandys in 1947). This involved her attending a conference in Brussels. At her interview she met Denys Gravenor Rhodes (1919–1981), a former rifle brigade officer, whom she married on 31 July 1950. She was his second wife, since he had first married the actress Rachel Gurney. That marriage was annulled in June 1950, four days after the birth of their daughter, Sharon. Margaret’s parents did not think him ‘the most suitable bridegroom. For instance, he did not have any inheritance to look forward to’, but ‘they could see how much I loved him’ (Rhodes, 79). The wedding took place at St Margaret’s, Westminster, with the king and queen as witnesses, and Princess Margaret as one of the bridesmaids. They honeymooned at Birkhall, the favourite Scottish home of the king and queen before they ascended the throne. Their honeymoon lasted nearly a year, comprising a long visit to New Zealand.

After their marriage Denys and Margaret Rhodes lived variously in a rectory near Tiverton, in Devon, with 44 acres, and two daughters, Victoria and Annabel, and two sons, Simon and Michael, were born. Denys Rhodes wrote novels, most successfully The Syndicate (1960), which was filmed, but the family was never well off. Subsequently his health declined and he suffered from depression. But during these years their lives were made memorable by overseas travel. They attended the exotic wedding of the crown prince of Sikkim to Hope Cooke in 1963, and the following year they visited Bhutan at the invitation of the prime minister, Jigme Palden Dorji, but were detained in a military coup in which Dorji was killed. As the situation worsened they left by jeep at the crack of dawn, accompanied by the Hollywood film star Shirley MacLaine, and after hair-raising adventures escaped back to India.

Denys and Margaret Rhodes left Tiverton in 1973, and after various moves were invited by the queen to rent the Garden House in Windsor Great Park with the phrase: ‘Could you bear to live in suburbia?’ (Rhodes, 1). They moved in in April 1981, but Denys died that October. By 1990 Sir Martin Gilliat, private secretary to Queen Elizabeth the queen mother, was recording that ‘some of our ladies are showing signs of wear’ (Gilliat to D. Walker, 11 Oct 1990, Harriet Irving Library, University of New Brunswick, MCL35, 1/1/8). Ruth, Lady Fermoy invited Margaret to join the team and in 1991 she was appointed an extra woman of the bedchamber. She was appointed LVO in 2000. She was such an intimate companion to her aunt that she was with her more or less constantly at Royal Lodge during March 2002, following the death of Princess Margaret. She was present when the queen mother died and it fell to her to register her death. After that, the queen frequently went to the Garden House, her home in Windsor Great Park, for drinks after matins, where formerly she had gone to Royal Lodge.

In later life Margaret Rhodes became well known to the media for her many interviews about the queen mother, and later the queen. She proved refreshingly outspoken, and was accordingly popular with television film-makers and viewers. It is primarily as an authentic and intimate witness to the queen’s early life that she will be remembered. She wrote her memoirs, The Final Curtsey, in 2011, with the blessing of the queen, who was aware of her lack of money. This book, ghosted by Tom Corby, a former court correspondent, was slight and frequently inconsistent in detail, and had been rejected by many publishers, but when taken on by Umbria Books it enjoyed an astonishing success, rising to be number one in The Times best-selling list. Along with many anecdotes, it included a moving first-hand account of the queen mother’s death in 2002. She gave a number of entertaining talks about her life, and was a guest on BBC Radio 4’s Desert Island Discs in 2012. She died at Wexham Park Hospital, Slough, on 25 November 2016, of chronic obstructive pulmonary disease, and her funeral (attended by the queen) was held on 12 December at the Royal Chapel of All Saints in Windsor Great Park. She was survived by her four children.