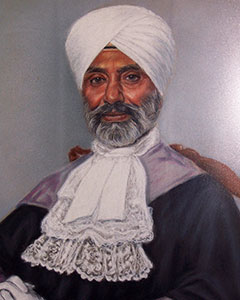 Singh, Sir Mota Matharu (1930–2016), barrister and judge, was born in Nairobi, Kenya, on 26 July 1930, the son of Sardar Dalip Singh Matharu (d. 1946), a garage proprietor, and his wife, Harnam. His father died in tragic circumstances when Mota was sixteen: he was fatally wounded while responding to a cry for help from an Indian woman who was being attacked. His death was not only tragic, it was also disastrous for the family. Mota Singh became responsible for supporting his widowed mother and five younger siblings. He was also responsible for their education and upbringing. The possibility of Mota’s continuing his own education was in the balance. However, he had been an excellent student and his teachers managed to arrange for the funding of the remainder of his education at the Duke of Gloucester School, Nairobi.

After leaving school Singh worked as a clerk in a firm of advocates. He was also a dedicated and gifted cricketer. In due course he played for Kenya, having built a reputation as a batsman of ability, and was president of the Sikh Union Cricket Club in Nairobi. At the behest of his family, in 1950 he entered into a marriage with Swaran Kaur. The marriage was very successful. They had two sons and a daughter—Pam, Satinder, and Jaswinder.

Notwithstanding having to fulfil his responsibilities for the family and ignoring advice to the contrary, in 1953 Singh came to England with his wife and daughter, where he completed the second part of his studies for the bar. While in England he worked at his employment during the day and studied at night. He was able to pass his bar exams in 1955 and was called to the bar by Lincoln’s Inn.

Singh returned to Nairobi in 1956, where he established a practice in a partnership with a colleague. The practice flourished and he took part in public life, holding numerous official positions in local government in Nairobi, including that of secretary of the Law Society of Kenya, a post that hitherto had always been filled by a British expatriate. He was also vice-president of Kenya Justice, a body affiliated to the International Commission of Jurists in Geneva, an alderman of Nairobi city council from 1958, and from 1961 a member of Kenya’s legislative council, representing Nairobi South. Following a round table conference in London about Kenyan independence, he was involved in the drafting of legislation relevant to elections on a common franchise.

In 1965, two years after Kenyan independence, together with his family Singh emigrated to England with the ambition of practising at the English bar. To do so was a considerable challenge, particularly for an individual of Asian descent. Initially he was unsuccessful, but eventually he obtained employment with a property company, where he acquired a considerable knowledge of land law and law relating to tenancies. At this time he was also a member of the London rent assessment panel. The directors of the company that employed him were so impressed by his skill and hard work that they provided financial help to enable him to establish a very successful practice in land law and tenant law in chambers in the Middle Temple.

Mota Singh was a devout Sikh who normally wore a white turban. This raised a problem because for centuries barristers had worn robes that included a wig when appearing in the senior courts. This was inconsistent with Singh’s continuing to wear his turban. How was this conflict to be resolved? If a barrister was deemed to be improperly dressed, a judge would uphold the current standards of dress by saying to the lawyer concerned, ‘Mr X …’ or ‘Miss Y … I cannot hear you’. As recorded in Mota Singh’s obituary in The Times,

Friends and colleagues still recall the tension in 1967 when Singh appeared in a court as an advocate for the first time to defend a man charged with drink-driving. It was by no means clear whether the judge would allow him to approach the bench in a turban. No objection was raised. The case, which he won, was reported in The Times under the headline: ‘Barrister in turban wins case'.

Thus, a new precedent as to dress was set. Also in 1967, Singh was appointed a member of the Race Relations Board, serving for ten years.

In 1978 Singh took silk, and he became a recorder of the Crown Court in 1979. In 1982 he was appointed a judge of the Crown Court. He was the first Sikh, and the first member of an ethnic minority, to be appointed a Crown Court judge. It was appropriate that Mota Singh should have set this precedent because ‘moja’ in Swahili, the native language of Kenya, means ‘first’, which was pointed out by the Kenya press when referring to the appointment. As a Crown Court judge, he sat at Southwark Crown Court, where he was subsequently nominated by the lord chancellor to be one of the judges able to try the most serious and complex fraud cases.

Although Singh had a remarkably successful career he was always prepared to take an interest in helping aspiring barristers. One day a young Sikh who was training for the bar came into his office to say goodbye. He was giving up because he could not afford the fees. Singh wrote a cheque in his favour. This revived the young man’s confidence and he was able to find a way to meet the costs; but he kept the cheque in a frame in memory of this help.

Singh’s career, both as a barrister and a judge, was probably helped by the fact that he always wore smart clothes, including a waistcoat. His family said he dressed in exactly the same way, even on holiday. However, he also retained his sense of humour and he particularly enjoyed a Jak cartoon in the Evening Standard depicting him having dismissed a defendant who had just been found not guilty and the man in the dock saying, ‘Thank you, M’lud, I hope your head gets better’.

The main qualities that Singh retained were, first, his commitment to his family, not only his own wife and children but also his younger siblings, two of whom, like him, became lawyers and another of whom became a chartered accountant. His second strength was his continuous commitment to the Sikh faith. Each night he would recite the Kirtan Sohila. In addition, he would wake in the middle of the night to bathe and recite the Japji Sahib. He remained an active member of the Southfields gurdwara for forty-five years. However, he realized that the institution needed a more democratic code of governance and under his guidance a new constitution was established, which was later followed by other gurdwaras. His third strength was his humility and dignity.

Mota Singh became deputy presiding judge at Southwark Crown Court before his retirement in 2002. On his retirement a valedictory hearing was held which was attended by many senior judges, including Lord Woolf, the lord chief justice, who delivered an address in which he praised Mota Singh’s magnificent contribution to the administration of justice in the UK. He continued to be devoted to good works after his retirement. Among other roles, he was chairman of the Immigration Advisory Service (2000–10) and of the Statutory (Disciplinary) Committee of the Royal Pharmaceutical Society of Great Britain (2007–09), a judicial member of the Parole Board (2009–12), and a vice-president of Barnardo’s. He was also chairman of the European section of the World Sikh Council (from 1998) and of the Guru Nanak International Education Fund (from 2006). His relaxation above all others was his attendance in the members’ enclosure at Lords cricket ground. The culmination of his achievements was when he was knighted in 2010: a royal recognition of what he had achieved. He died in Tooting, London, on 13 November 2016, and was survived by his wife and children.