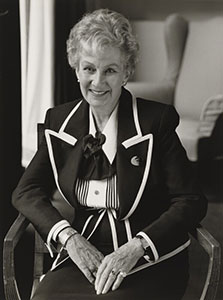 Anstee, Dame Margaret Joan (1926–2016), diplomatist and international civil servant, was born on 25 June 1926 at 2 Albert Villas, Writtle, Essex, the only child of Edward Curtis Anstee (1894–1971), printer, and his wife, Annie Adaliza, née Mills (1898–1972), who had worked as a domestic servant. Her parents had married in Titley, Hertfordshire, in 1922; both had left school at a young age but were voracious readers and encouraged their daughter’s talents. She was educated at Chelmsford County High School for Girls, where she showed an unusual flair for languages, and from 1944 Newnham College, Cambridge, where she graduated with a first in the modern and medieval languages tripos in 1947 and developed her lifelong loves of theatre, the arts, and fashionable clothes (albeit the ones she wore in Cambridge she made herself).

After a year lecturing in Spanish at Queen’s University, Belfast, in 1948 Anstee joined the Foreign Office as a third secretary, working on the Latin American desk. ‘To be a female and of working-class and grammar-school origins was a double and dubious distinction’, she said (Never Learn to Type, 70). She was the last person to see Donald Maclean, her boss, before he defected. She was briefly engaged to her fellow diplomat Robin Mackworth-Young (1920–2000), but on 5 May 1952 she married another diplomat (and former naval officer), Michael Rotherham Starkey (1920–2002). The marriage, which obliged her to leave the diplomatic service, was a disaster: when she followed him to Manila, her husband took to the lengthy expatriate cocktail parties like a duck to water, ‘only unfortunately he did not stick to water’ (ibid., 98). Later in 1952 she took a job with the United Nations (UN) Technical Assistance Board in Manila. ‘The fact that I had taken a job caused considerable fluttering among the diplomatic ladies’, she recalled; ‘in the end I was excused coffee mornings and mah-jongg parties on condition I did not flag on other obligations’ (ibid., 104). She returned to England with her husband in 1954 and took on some part-time teaching at Newnham, but his drinking and violent temper forced her to leave him, and for a while she lived alone in a bedsitter in Cambridge before in 1956 divorcing her husband, changing her name legally back to her maiden name, and rejoining the UN, as acting head of its Technical Assistance Board in Bogotá.

From Colombia Anstee moved to Uruguay (1957–9) then Bolivia (1960–5) as resident representative of the UN Technical Assistance Board; she fell in love with Bolivia, where she bought a plot of land and built a villa with a terraced garden running down to a lake, to which she would return throughout her life. In 1965–7 she was posted to Ethiopia, where she was resident representative of the UN Development Programme (UNDP) and UNDP liaison officer with the UN Economic Commission for Africa; on presenting her credentials to Haile Selassie, the first woman head of a mission he had encountered, he in turn presented her with a solid gold bracelet woven with lion and giraffe hair. After brief secondments to the UK civil service as senior economic adviser in the prime minister’s office (1967–8) and to an independent commission on the capacity of the UN development agencies (1968–9) she was the UNDP’s resident representative in Morocco (1969–72) then Chile (1972–4). Her time in the latter country coincided with the military coup against the government of Salvador Allende in September 1973: ‘grown men would fling themselves to their knees, clasp my legs, and beg not to be turned out onto the street …. It was an intolerable burden to know that the fate of human lives in some way rested in my hands, and that there were overwhelming odds against my being able to save them’ (Never Learn to Type, 319-20, 326).

Anstee’s subsequent career with the UN saw her fill a series of increasingly senior roles at UN headquarters in New York, Geneva, and Vienna: UNDP deputy assistant administrator and deputy regional director for Latin America (1974–6); director of the administrator’s unit for special assignments (February–July 1976); assistant deputy administrator (July–December 1976); assistant administrator and director of the bureau for programme policy and evaluation (1977-8); assistant secretary general in charge of technical co-operation for development (1978-87), simultaneously special co-ordinator to ensure implementation of the UN General Assembly resolution on UN reform (1986–7); and finally under-secretary general of the UN (the first woman to hold the post), director general of the UN office in Vienna, and head of the Centre for Social Development and Humanitarian Affairs (1987–93).

Such were Anstee’s diplomatic and organizational skills that she was frequently asked to undertake special, and sometimes perilous, missions, becoming known as the UN’s troubleshooter par excellence. Among other temporary posts she was deputy head of the UN relief operation in Bangladesh following its war of independence and the emergency assistance mission to Zambia, both in 1973; special representative of the secretary general coordinating international assistance to Mexico following the earthquake in 1985; coordinator of the UN efforts to deal with burning oil wells and other legacies of the first Gulf war in Kuwait in 1991–2; and finally special representative of the secretary general and head of the UN Angola Verification Mission in 1992–3. She regarded this latter mission as her most difficult and frustrating: charged with putting together a peace deal between the Angolan government and the rebel forces of UNITA, led by Jonas Savimbi (who on radio called her a prostitute and warned that a stray bullet would soon find her), she found her work undermined by the delay in sending UN troops to help police any ceasefire. She also served on numerous taskforces and advisory groups, ranging from the provision of technical assistance and emergency aid to efforts to control the illicit traffic in narcotic drugs and share best practice in the prevention of crime and treatment of offenders.

Anstee finally retired in 1993 after almost four decades’ service to the UN. She reckoned that in that time she had lived in thirty countries and visited 130. She divided her time between her villa in Bolivia and a house at Knill, Herefordshire, very close to the border with Wales, with Offa’s Dyke running along the ridge above the village, sharing this house with her maternal aunt Christina until the latter’s death in 2000. Despite these remote locations she maintained her hectic schedule of public and international commitment: she was an adviser to the president and government of Bolivia from 1993 to 1997 and again from 2002 to 2005; a trustee of HelpAge International (1993–6); chairman of the expert advisory group to the UN department of peacekeeping operations (1996–2001); and vice president of the UN Association of the UK (2002-16). She was also an adviser to the UN studies programme at Yale University, the Oxford Research Group, the British-Angola Forum, the UN Intellectual History Project, ex-president Jimmy Carter’s International Council on Conflict Resolution, and the Durham Global Security Institute. She received honorary degrees from Essex, Westminster, Cambridge, and London universities; the first Reves peace prize of the College of William and Mary, Williamsburg, USA; the Sir Brian Urquhart award of the UN Association of the UK; and official honours from Morocco, Bolivia, Austria, and Chile. She was made a DCMG in 1994.

Anstee formed a close professional and personal partnership with a distinguished fellow UN official, Sir Robert Gillman Allen Jackson (1911–1991), for the last twenty years of his life. They never married, initially because Jackson was still married to the economist and prominent Roman Catholic laywoman Barbara Ward.

Anstee listed her recreations in Who’s Who as ‘writing, gardening, hill-walking (preferably in the Andes), bird-watching, swimming’. Her first book was The Administration of International Development Aid (1969), followed in 1970 by Gate of the Sun: A Prospect of Bolivia and an edited book on Africa and the World, the outcome of a Haile Selassie prize trust symposium. Her other books included Orphan of the Cold War: The Inside Story of the Collapse of the Angolan Peace Process, 1992–93 (1996), The House on the Sacred Lake and Other Bolivian Dreams—and Nightmares (2009), and a biography of J. B. Trend, the first professor of Spanish at Cambridge (2013). In addition she wrote numerous articles and chapters in books, especially on peacekeeping, social and economic development, and reform of the UN. She published her memoirs, Never Learn to Type, in 2003, in which inter alia she recalled with amusement how she was frequently mistaken for a secretary even when serving as under-secretary general of the UN.

A glamorous woman, with coiffed brown, later blonde, hair, and always wearing make-up and fashionable clothes on even the toughest of assignments, Margaret Anstee was known throughout the international relations world for her piercing intelligence, her self-confidence and sangfroid, and her wry and sometimes risqué sense of humour. She died at her home in Knill of peripheral vascular disease and other causes. She had no children. She left £4.5 million to Newnham College, which in March 2018 launched the Margaret Anstee Centre for Global Studies.