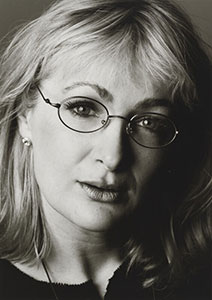 Aherne, Caroline Mary (1963–2016), comedian, actress, and writer, was born on 24 December 1963 at Perivale maternity hospital, London, the second child of Bartholomew Edmond (Bert) Aherne (1933–1994), a railwayman with London Transport, and his wife Mary Frances (Maureen), née Regan, a school dinner lady. A brother, Patrick, two years older, completed the Irish Catholic family, who lived in Ealing until Caroline was two, when they moved to Wythenshawe, a suburb of Manchester. Illness played a significant part in her childhood. Both she and Patrick suffered from retinoblastoma, a cancer of the retina, which led to regular hospital appointments and generated loyal support from the local Catholic community who funded a visit to Lourdes for the children. Patrick mostly lost the sight of one eye and Caroline’s vision also deteriorated. She wore an eye patch for many years.

Caroline Aherne attended the Hollies FCJ Convent School in West Didsbury where she attained nine A-grade O-levels and her IQ was assessed at a remarkably high 176. As a teenager she was noted as a great mimic and joker, and she went on to study drama at Liverpool Polytechnic before joining the BBC as a secretary, working for Janet Street-Porter. As a sideline she branched out into comedy, working the Manchester club circuit and teaming up with Craig Cash to host a programme on Stockport’s KFM radio station, where she developed characters such as the country and western singer Mitzi Goldberg and Sister Mary Immaculate, whose ambition was to kiss the pope’s ring. It was this sort of cheeky, knowing humour that was to define her career.

Television soon beckoned. Aherne appeared on Granada Television in the sketch series The Dead Good Show (1992), alongside two other up-and-coming comic talents, Steve Coogan and John Thomson. The comedian Chris Sievey asked her to join him on a Channel 4 game show called Remote Control and then in his own ITV series (also 1992), in both of which he played the comic character Frank Sidebottom. It was in the latter series that Aherne introduced to television the character named Mrs Merton that was to bring her national fame. A little old lady with permed hair, granny spectacles, and a wardrobe full of floral dresses, the seemingly innocuous and well-meaning Merton was originally devised as an agony aunt, but by the time she had acquired her own national television series on the BBC in 1995 she had been transformed into a television chat show host who could ask the sort of outrageous questions that no real-life interviewer would ever get away with. Under her blue-rinsed hair lurked a razor-sharp mind and a caustic wit that ensured that no celebrity was safe from her ‘innocent’ double entendres and cutting quips. Most famously, when Debbie McGee appeared, she was asked what first attracted her to ‘the millionaire’ Paul Daniels. Craig Cash was seen occasionally as her child-like son and the duo were later spun-off into a sitcom, Mrs Merton and Malcolm (1999), that followed their domestic lives in Heaton Norris. They also appeared in a series of commercials for British Gas.

By the time of Mrs Merton’s first chat show, Aherne had become a member of The Fast Show team, supplying a number of characters for this BBC sketch series between 1994 and 1997. They included a nosy supermarket checkout girl who tactlessly remarked upon the contents of customers’ shopping baskets and Paola Fisch, a Mediterranean weather presenter whose perennially sunny forecasts gave rise to the catchphrase ‘Scorchio!’.

In 1994 Aherne married Peter Hook (real name Peter Woodhead) (b. 1956), the bass player with the bands Joy Division and New Order. The ceremony took place in Las Vegas and she briefly adopted Hook’s professional name, performing as Caroline Hook, but the marriage only lasted three years. A relationship with television researcher Matthew John (Matt) Bowers (b. 1969) followed and led to a public altercation between the two men that made the national press. When Bowers died of stomach cancer in 1997, Aherne was distraught. Her life was now unravelling as she struggled to cope with media intrusion into her private world and a love of sparkling wine that had spiralled into alcohol addiction. Another relationship—this time with American actor Alex Denisof (b. 1966)—broke down and she attempted to take her own life only to be saved by a 999 call made by her mother after a traumatic phone conversation.

Aherne’s life was turned around when she checked into the Priory rehabilitation clinic. On returning to her home in Notting Hill, London, she became reclusive but during this period conceived her most acclaimed work. Collaborating again with Cash, she developed the idea of a comedy based in a working-class family home in the suburbs of Manchester. This was to be a sitcom with a difference, one deliberately short on action, with dialogue confined to mundane conversation as the family sank deeper and deeper into their time-worn three-piece suite while watching television or drinking a mug of tea. She successfully argued against the use of a laugh track and a studio audience in order to achieve a more naturalistic tone, and she installed a cast of down-to-earth characters that could easily have been found at a northern bus stop. The Royle Family was born in 1998 and became one of the BBC’s biggest hits at the turn of the new millennium, with three series between 1998 and 2000.

Aherne herself played the family’s bone-idle daughter Denise, with Cash as her gormless boyfriend Dave, Ralf Little as her adolescent brother Antony, Sue Johnston as their put-upon mother Barbara, and Ricky Tomlinson as the layabout, scruffy dad, Jim—a character based to some degree on Aherne’s own father, who, like Jim, was constantly grumbling about the immersion being on or the lights not switched off. But, for all their personal failings and unsavoury habits, the family was clearly close and warm-hearted, and its members quickly endeared themselves to the nation.

At this time—the peak of her career—Aherne also wrote a column for the Sunday Times ‘Style’ section. Sadly, success took a toll on her health and again she succumbed to alcohol. To break free, she announced her retirement and emigrated to Sydney in 2001. ‘Celebrity is just a game,’ she declared. ‘But I can’t be arsed playing it anymore because I’ve decided I’m no good at it’ (Daily Telegraph, 15 April 2001). While in Australia, she began to enjoy life again and resumed work, co-creating and directing the retirement comedy Dossa and Joe (2002), but, homesick, she returned to the UK within a year, initially with a new boyfriend, Brett Whitford (b. 1968), an Australian internet entrepreneur, although the relationship soon foundered.

Back in Manchester and working again with Cash, Aherne put together four Royle Family Christmas specials and also devised a similar series set in a Manchester pub called Early Doors. However, she quit the project early, leaving Cash and replacement writing partner Phil Mealey to develop the series into another BBC hit when broadcast in 2003–4. Aherne found a new collaborator in writer Jeff Pope, with whom she scripted the single comedies The Fattest Man in Britain (2009) and The Security Men (2013) for ITV. Guest roles in other series, such as Cash’s Sky 1 comedy After Hours (2015), and some narration work were some of her later credits.

Sickness continued to dog her, as Aherne revealed at an event for Macmillan Cancer Research in 2014. ‘My mum told us that only special people get cancer,’ she said. ‘I must be very special because I’ve had it in my lungs and my bladder as well’ (Manchester Evening News, 26 June 2014). Despite this ill health, she continued to work, latterly as the narrator of the Channel 4 series Gogglebox (2014), which—echoing the premise of The Royle Family—eavesdropped on real-life families as they watched television. At her request, the seriousness of her illness was not made public and, still leading a rather reclusive life, she died of lung cancer on 2 July 2016 at her home in Greenhill Road, Timperley, near Altrincham. She was survived by her mother and her brother, Patrick. Friends and colleagues paid fulsome tributes. ‘We’ve lost a great comedian, actress and writer and sadly I’ve lost a very dear, very old friend,’ said John Thomson (Guardian, 4 July 2016). Comedian David Baddiel added: ‘She was a really lovely woman. Vulnerable and complex and damaged but … lovely’ (ibid.). She won three BAFTA awards, one for The Mrs Merton Show, in 1997, and two for The Royle Family, in 2000 and 2007, and was nominated a further seven times, including for direction.