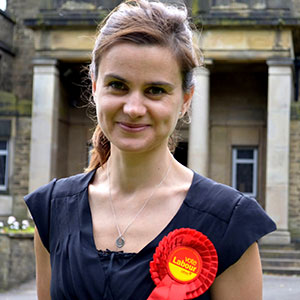 Cox [née Leadbeater], Helen Joanne (Jo) (1974–2016), politician, was born on 22 June 1974 at Staincliffe General Hospital, Dewsbury, West Yorkshire, the daughter of Gordon Leadbeater, industrial chemist and cosmetics production manager, and his wife, Jean, née Smith, a school secretary. Both parents were born in Yorkshire, her father in Bradford and her mother in Liversedge; at the time of her birth registration they lived at 15 Berwick Avenue, Heckmondwike. They were, Jo said, ‘not political’: ‘they were too busy—working, looking after kids, trying to pay the mortgage’ (Times, 18 June 2016). She was educated at Heckmondwike Grammar School, where she was head girl, and Pembroke College, Cambridge, where she switched from archaeology and anthropology to social and political sciences, graduating in 1995. She later said that Cambridge ‘knocked me for about five years’, though she credited the university with awakening her politically: ‘it was just a realisation that where you were born mattered. That how you spoke mattered … who you knew mattered. I didn’t really speak right … ’ (Yorkshire Post, 26 Dec 2015).

On leaving Cambridge, Jo Leadbeater initially took a post as political adviser to Joan Walley, the Labour MP for Stoke-on-Trent North. A strong Europhile, she became head of key campaigns at the pressure group Britain in Europe (1998–9) then political adviser to Glenys Kinnock MEP from 2000 to 2002. In the latter year she joined the charity Oxfam, as head of its EU office (2002–5), then head of policy and advocacy (2005–7), and finally head of humanitarian campaigning (2007–9), based in New York. During this time she travelled frequently to see Oxfam’s projects on the ground, including in conflict areas.

It was while working for Oxfam that she met Brendan Cox (b. 1978), an international development adviser who later worked as a special adviser to the prime minister, Gordon Brown. He was the son of Gordon Sidney Allister Cox, a university lecturer in music, and his wife, Sheila, née Crook, a social worker. They shared a love of the outdoors, mountaineering, and boats, as well as a strong commitment to global and social justice. They married in a humanist ceremony on 27 June 2009 at Barrisdale on the Knoydart peninsula, on the west coast of Scotland, and had two children, Cuillin (b. 2011) and Lejla (b. 2012). The family lived on a converted Dutch barge moored on the Thames at Hermitage Community Moorings, near Tower Bridge, with a remote cottage in Wales for weekends and holidays.

From 2009 to 2011 Jo Cox was director of the Maternal Mortality Campaign, founded by Sarah Brown, Gordon Brown’s wife. She was subsequently a strategy consultant for Save the Children, the National Society for the Prevention of Cruelty to Children, and the White Ribbon Alliance for Safe Motherhood, an international coalition of individuals and non-governmental organizations campaigning to raise awareness of measures to reduce maternal mortality. From 2013 to 2014 she was founder and chief executive officer of the research institute UK Women, and in 2014 she became a strategic adviser to the Freedom Fund (combating modern slavery) and the Bill and Melinda Gates Foundation. Already active in Labour politics, she was chair of the Labour Women’s Network from 2010 to 2014.

In May 2014 Cox was selected from an all-women shortlist as the Labour candidate for Batley and Spen, following the decision by Mike Wood to step down at the next election. In the general election of May 2015 she duly held the seat for Labour, increasing the party’s majority from 4,406 to 6,057. In the Labour leadership election which followed the 2015 general election defeat she was one of thirty-six Labour MPs who nominated Jeremy Corbyn, on the grounds that this would encourage a broad debate; she herself voted for Liz Kendall and later expressed regret at having nominated Corbyn, accusing him of ‘weak leadership, poor judgement and a mistaken sense of priorities’ (Guardian, 6 May 2016).

Although she made her maiden speech (on 3 June 2015) highlighting the urgent need to invest in regeneration in constituencies such as her own, Cox became most widely known for her campaigning on international and humanitarian issues. In particular, she campaigned for a more humane treatment of refugees and asylum seekers and (most notably in an article in The Observer on 11 October 2015, written jointly with the Conservative MP Andrew Mitchell, the former secretary of state for international development) for intervention in the Syrian civil war in order to create and protect safe havens for refugees. Nevertheless she abstained in the House of Commons vote in December 2015 to approve military intervention in Syria, arguing that intervention should target President Assad’s forces, as well as Islamic State: ‘By refusing to tackle Assad’s brutality, we may actually alienate more of the Sunni population …. I am not against airstrikes per se, but I cannot actively support them unless they are part of a plan’ (Huffington Post, 2 Dec 2015). She was also a supporter of the Palestinian cause, arguing forcefully for the lifting of the blockade of the Gaza Strip and supporting boycotts of Israeli products. Nearer to home, she supported the work of Tell MAMA in investigating and protesting against incidents of Islamophobia.

Barely five feet tall, and often dressed in eye-catching, colourful clothes, Jo Cox was often described as a bundle of energy, rushing from one meeting to another, but always putting her family first. Above all she was recognized as a woman of principle, who entered politics not to further her own ambitions but in order to make the world a better place.

Following prime minister David Cameron’s announcement of a referendum on membership of the European Union, to be held on 23 June 2016, Cox (unlike the Labour Party leadership) campaigned vigorously for ‘Remain’. It was during the campaign that on 16 June 2016, while preparing to hold a constituency surgery at the public library in Birstall, Cox was shot three times and stabbed fifteen times by Thomas Mair, who repeatedly shouted, ‘Britain first.’ She was pronounced dead at the scene. A 77-year-old local man, Bernard Kenny, was stabbed in the stomach while trying to protect her; he was later awarded the George medal. Mair was subsequently convicted of murder and given a whole-life tariff.

Jo Cox’s death prompted a wave of shock and grief. Prime minister Cameron described her as ‘a star for her constituents, a star in parliament’, while Labour leader Corbyn said that ‘her murder was an attack on democracy, and has robbed the world of an ambassador of kindness and compassion’ (BBC News, 16 June 2016). Condolences were sent by US president Barack Obama and by politicians across the world. Her husband, Brendan, urged people to ‘fight against the hatred that killed her’ (ibid.). Flags were flown at half-mast at Buckingham Palace and 10 Downing Street. Campaigning in the referendum was suspended for a day as a mark of respect. The result of the referendum would have horrified, though probably would not have shocked, her. At the by-election held in Batley and Spen to elect her successor, the other major parties declined to put up candidates, and Tracy Brabin won the seat for Labour with 86 per cent of the vote. In 2016 Brendan Cox, along with other family members, and former colleagues and friends, launched the Jo Cox Foundation, to promote community cohesion, and in 2017 he published Jo Cox: More in Common, which described her life and values and the impact of her death. A street in Avallon, France, and a square in Brussels were named after her; a memorial was also unveiled at the House of Commons.