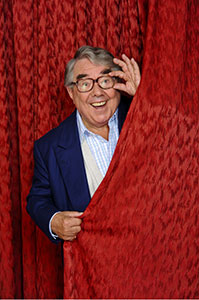 Corbett, Ronald Balfour [Ronnie] (1930–2016), actor and comedian, was born in the Royal Maternity Hospital, Edinburgh, on 4 December 1930, the oldest of three children of William Balfour Corbett (1898–1974), a baker, and his wife Annie Elizabeth, née Main (1900–1991), a telephone exchange worker and, later, an accounts clerk. At the time of his birth registration the family lived at 22 Warrender Park Road, Edinburgh. He went first to James Gillespie’s School for Boys, Edinburgh, and then the ancient boys-only Royal High School, Edinburgh. He was brought up in the Church of Scotland and took part in kirk drama society performances, attending a youth drama club at the Gateway Theatre, which had been donated to the kirk in 1945 and opened in 1946 as a theatre/cinema with outreach activities. His love of drama having been inspired by Edinburgh’s theatrical triangle of the Royal Lyceum, King’s, and Empire theatres, his acting début, aged sixteen, was in the city’s Pleasance Theatre. According to his brother, on dreary Sunday afternoons Corbett would pretend to be the local minister giving rousing sermons, demonstrating ‘an early love of the monologue’ (The Times, 1 April 2016).

Corbett left school at seventeen, with seven higher leaving certificates, more than normally taken or required for university entry, and became a clerk in the government’s agricultural department in Edinburgh, sailing quickly through the examinations to enter clerical and then executive grades. At heart, having been an acting success, including in a pantomime role as a wicked aunt, he wanted to enter the theatre, and he took the opportunity to perform with the Civil Service Amateur Dramatic Society. As an adult he was only 5 feet 1 inch tall and later said, ‘I think I saw theatre as a way to overcome my size and the problem of not being noticed’ (The Times, 1 April 2016). At the age of nineteen he began national service in the RAF, where he rose from the non-commissioned ranks to become a pilot officer and then a flying officer, said to be the shortest officer in the British armed services. While in the RAF his friendship with the son of the actor Sir Cedric Hardwicke encouraged his theatrical ambitions. He studied drama in evening classes under the redoubtable Mesdames Glover and Turner-Robertson, principals of Edinburgh College of Speech and Drama. In those, as was then common practice among Scottish actors seeking to work south of the border, he took elocution lessons in English received pronunciation. After completing his service he left for London in 1951, giving himself until he became forty to succeed in theatre.

During the 1950s Corbett supported himself through a variety of day jobs including caretaker, house-sitter, tennis-court superintendent, advertising salesman, and barman, while he found occasional work in nightclubs and music halls and played minor roles in not-altogether memorable British comedy films such as You’re Only Young Twice (1953) and Fun at St Fanny’s (1955), as well as the more successful Rockets Galore (1957). His first professional stage part was in a concert party led by Clive Dunn, later of Dad’s Army fame, and it became clear his forte lay in playing light comic roles. He developed his comic talent, working with stars such as Bernard Bresslaw and the cross-dressing singer/comedian Danny La Rue. After acting small parts in three television episodes between 1953 and 1957, he appeared in forty episodes of the children’s programme Crackerjack (1957–8), in which he became a favourite personality.

Beginning to be more recognized, Corbett appeared at La Rue’s club, Winston’s, and in venues such as the Talk of the Town nightclub, where he ‘could hold a dinner-dance audience with a lengthy solo spot of comic patter’ (Daily Telegraph, 1 April 2016). He appeared in West End musicals: opposite Bob Monkhouse in Rodgers and Hart’s The Boys from Syracuse (1963) and as Will Scarlett in Lionel Bart’s musical Twang! (1965), though the latter failed to last long on stage. At the time that his talent was being increasingly acknowledged, on 11 May 1966 he married Anne Maud Padley, née Hart (b. 1933), daughter of Marvin Hart, businessman, and former wife of John Padley. She was a singer and dancer who had worked with Corbett as his stooge, and their marriage was to prove long and happy. Although their first child, Andrew, was born with a serious heart defect and died at six weeks old in 1966, the couple later had two daughters: Sophie became a fashion designer and Emma a dancer.

The producer/performer David Frost had noticed Corbett’s talent and recruited him for his satirical BBC television programme, The Frost Report (1966–7). This brought together many of the most talented young comic actors and writers of the time. There he met Ronnie Barker, until then mainly known as a repertory actor. The pair quickly struck up a partnership based on personal rapport and mutual respect. In The Frost Report they appeared in a soon-famous sketch about the British class system in which the diminutive Corbett represented a member of the working class alongside the medium-sized (so middle-class) Barker and tall (so upper-class) John Cleese as they commented on their interrelationships in a manner both humorous and barbed: Corbett as the worker had the last line, ‘I know my place.’ When The Frost Report ceased transmission he moved with Frost to ITV’s Frost on Sunday (1968–70). In 1967 he returned to film in the spoof James Bond movie Casino Royale and starred in a television sitcom, written for him by Frost Report writers Barry Cryer, Graham Chapman, and Eric Idle, No—That’s Me Over There (ITV, 1967–70). Cryer and Chapman were to write two follow-up series for him: Now Look Here (BBC, 1971–3) and The Prince of Denmark (BBC, 1974). Corbett also hosted The Corbett Follies (ITV, 1969).

Clearly, as he approached forty Corbett had achieved his aim of succeeding and not only in theatre but even more so in television. Indeed, the level of his popular recognition by this time is shown by his being subject of a This Is Your Life programme in 1970. At that year’s BAFTA awards, already a star, he achieved with Barker a major career breakthrough. The couple were hosting the ceremony when there was a technical hitch. They improvised entertainingly to cover the gap in the proceedings, impressing Bill Cotton, then BBC head of light entertainment, who recruited them as a duo. Their series—The Two Ronnies—ran for more than ninety-three episodes from 1971 to 1987, when Barker stood down unexpectedly, partly on health grounds and partly, it was thought, because he feared his work was becoming stale. This ratings-topping show, with its wordplay, double entendres, and occasional knockabout hints of bawdiness, attracted weekly audiences often of 17 million and, at least once, 22 million. Each episode followed a regular format, opening with spoof news items, followed by comic sketches, monologues, and a comedy drama serial, and concluding with a lively music number with the pair often in drag, before signing off with more spoof news items. A highlight was Corbett’s weekly solo spot in which he sat, wearing a vivid Lyle & Scott golf sweater and large thick-framed spectacles which, with his bushy eyebrows, gave him a somewhat owlish appearance, in an overlarge black chair which accentuated his small stature, speaking direct to camera. His monologue, scripted by Spike Mullins and David Renwick, would be apparently distracted along meandering sidetracks—he would suddenly seem to return to his line of thought, saying ‘But I digress’, before rambling some more—and featured his exquisite comic timing before reaching, as if almost by chance, his punchline. The form fostered his dry, wry sense of comedy and acute observation. A London Palladium live version of their show in 1977 attracted sell-out audiences. As a team, Corbett and Barker were not a double act in the tradition of one being a straight man or feed: each was funny in complementary ways, Corbett a comic with cabaret, music hall, and West End and screen acting experience, and Barker a former repertory-theatre character actor.

Corbett continued developing his own career, not least in another BBC sitcom written for him, Sorry! (1981–8), in which he played Timothy Lumsden, a middle-aged librarian put upon by his mother. By now, too, he was making extensive corporate entertainment appearances, speaking at lunches and dinners. He also performed in pantomime from time to time. His film appearances were now rarer, comprising the lead part, Brian Runnicles, in No Sex Please, We’re British (1973), the part of Reggie Sea Lions in Fierce Creatures (1997), written by his former Frost Report colleague John Cleese, and a cameo as Captain Tam McLintoch in John Landis’s comedy thriller Burke & Hare (2010). On television he hosted the BBC game show Small Talk (1994–6) and went on to appear in cameo roles, quizzes, and chat shows. These included reviving his armchair monologue routines for The Ben Elton Show (BBC, 1998), the Ugly Sister Griselda in an ITV production of Cinderella (2000), and guest appearances on BBC panel shows such as Have I Got News for You (2004) and Would I Lie to You? (2010). In 2006 he played an exaggerated version of himself in Ricky Gervais’s Extras, caught taking drugs at the BAFTA awards.

Corbett’s appearance on the BBC Radio 4 programme Desert Island Discs in 2007 was further proof that he had become a ‘national treasure’, but, as many of his cameo roles demonstrate, he did not take himself over-seriously. Further, his recruitment to such roles by new-wave comedians like Elton and Gervais mark the extent to which that younger generation regarded Corbett as a master of their art. This art was highlighted again in 2005 when Corbett teamed up again with Barker, who died in the same year, for The Two Ronnies Sketchbook, whose seven programmes featured comedy sketches from their original series with newly recorded linking material. From 2010 to 2014 Corbett starred in the BBC Radio 4 series When the Dog Dies, reunited with Ian Davidson and Peter Vincent, writers of Sorry!.

Corbett was made an OBE in 1978, advanced to CBE in 2012, and Whitehall sources confirmed he was to be knighted in the 2016 queen’s birthday honours list. In 2000 his autobiography, High Hopes, was published, and in 2002 he was awarded an honorary DLitt by Queen Margaret University, Edinburgh, successor to the Edinburgh College of Speech and Drama, where the laureation speech concluded:

Ronnie’s work puts us in touch with the eternal, the humour that makes us human and keeps us rational beings, homo sapiens. He has subtlety, an ironic vision, a canniness and quizzicality which marks him not only as an outstanding commentator on human life, but an exemplary contributor to, and shaper of, our enjoyment of life itself.

Corbett supported a variety of charities, not least through celebrity and pro-am golf events, twice being president (in 1982 and 1987) of Lord’s Taverners, working for disadvantaged and disabled young people. He was also honorary president of the Five Foot Club, formed to fight for a better deal for smaller people. Golf was a major interest. His Surrey home for many years was near Addington golf course and called ‘Fairways’, while his summer home at Gullane in East Lothian, Scotland, where he kept bees, another of his interests, was close to both Muirfield and Gullane courses. In 2009 he made a documentary about and with the great Scottish golfer Colin Montgomerie, in which they played at Gleneagles. His sporting interests also included cricket, racing, and football: he supported both Crystal Palace FC in London and Heart of Midlothian FC in his native Edinburgh. He was a keen cook and woodworker and loved fine cars, driving at different times Bentleys and Rolls-Royces.

Having moved to Shirley Church Road, Croydon, Corbett died on 31 March 2016 at Shirley Oaks Hospital, Croydon, of aspiration pneumonia and motor neurone disease. His funeral, attended by many distinguished friends and colleagues, took place on 18 April 2016 at St John the Evangelist, Shirley. He was survived by his wife Anne and their two daughters. John Cleese summed up not just his achievement, but his humanity, in his obituary tribute: ‘He was a great, kind mentor and a wonderfully witty companion’ (Daily Telegraph, 1 April 2016).