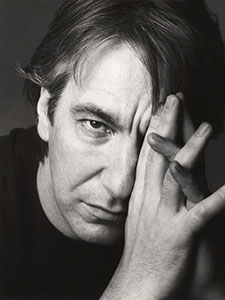 Rickman, Alan Sidney Patrick (1946–2016), actor and director, was born on 21 February 1946 at 24 Lynton Road, Acton, London, the second son and second of four children (three boys and a girl) of Bernard Rickman (1914–1954), painter and decorator, and his wife, Margaret Doreen Rose, née Bartlett (1911–1997). His father was an Irish Catholic and his mother a Welsh Methodist. After Bernard Rickman died of lung cancer when Alan was eight years old his mother married Kenneth Edginton in 1960, but the marriage ended in divorce after three years.

Growing up on a council estate in Acton, Rickman attended Derwentwater primary school before winning a scholarship to Latymer Upper School, where he acquired an interest in literature and drama, though at that time he had no serious ambitions to become an actor. He was a student at the Chelsea School of Art and then at the Royal College of Art. His first job was as a graphic designer for the Notting Hill Herald. At the age of twenty-six he requested an audition at the Royal Academy of Dramatic Art and attended there between 1972 and 1974, financing his studies by working as a dresser for Sir Ralph Richardson. This was followed by parts in repertory theatre in Leicester and Sheffield and a number of minor roles with the Royal Shakespeare Company (RSC), but recognition of his talent was slow to develop. At an RSC party in the early 1980s, Rickman remarked to the writer Stephen Poliakoff that ‘I’m nearly 40 and nobody here knows who I am’ (The Guardian, 14 Jan 2016). This was about to change through three remarkable performances across three different media.

In the 1982 BBC Television serialization of Anthony Trollope’s The Barchester Chronicles, Rickman delivered a definitive portrayal of Barchester’s new chaplain, Obadiah Slope, one of the most devious, repugnant, but fascinating characters in Trollope’s entire fiction. In 1987 he appeared opposite Lindsay Duncan as the manipulative seducer Valmont in the RSC’s production, Les liaisons dangereuses, adapted by Christopher Hampton from the novel by Pierre Choderlos de Laclos. It was a huge critical and box office success in the West End and on Broadway. Disappointed to be passed over for the role in favour of John Malkovich in Stephen Frears’s 1988 film, Rickman had nevertheless been seen on stage by film producer Joel Silver and director John McTiernan, who cast him as the criminal mastermind Hans Gruber, leader of a gang who hijack a city skyscraper in the box-office hit Die Hard (1988). He was so charismatically chilling that it led to a danger of his being subsequently typecast as a high-class villain. His striking and intimidating physical presence was allied to a voice that Helen Mirren said ‘could suggest honey or a hidden stiletto blade’ (The Guardian, 14 Jan 2016: in fact the languid delivery was partly the result of a speech impediment from birth), with the suggestion behind that of a diabolical intelligence. All of these qualities were powerfully in evidence in his Golden Globe award-winning performance as Rasputin in the television film Rasputin: Dark Servant of Destiny (1996).

If menace became a particular speciality, Rickman was not averse to spicing it with humour. His BAFTA award-winning performance as the Sheriff of Nottingham quite upstaged Kevin Costner’s Robin Hood in Robin Hood: Prince of Thieves (1991), particularly when, in one spectacular tantrum, the sheriff issues orders to ‘cancel the kitchen scraps for lepers and orphans—and cancel Christmas!’ In the cult classic Galaxy Quest (1999) he was a lugubrious delight as a Shakespearean actor mainly remembered for his appearance in a long-running science-fiction television show and now compelled glumly to repeat his catch-phrase, ‘By Grabthar’s Hammer you shall be avenged’, whenever encountering his adoring fan-base. For a number of years he directed the stand-up comedy routine of his good friend Ruby Wax. Yet he could also excel in sympathetic roles, such as the ghost watching over his bereaved wife in Anthony Minghella’s Truly, Madly, Deeply (1990); as the cuckolded husband in Stephen Poliakoff’s Close My Eyes (1990), who was far more sympathetic than the incestuous lovers; and as Colonel Brandon, whose love and loyalty will gradually mend the broken heart of Kate Winslet’s Marianne, in Ang Lee’s film of Jane Austen’s Sense and Sensibility (1995).

As a late developer, Rickman felt he missed out on playing some of the great Shakespearean roles in his prime. He was in his mid-forties by the time he was asked to play Hamlet at the Riverside Studio in 1992, and his Mark Antony opposite Helen Mirren’s Cleopatra in the 1998 National Theatre production was poorly received. However, his reunion with Lindsay Duncan in a 2002 production of Noël Coward’s Private Lives resulted in a triumph in London and New York; and they also co-starred to great acclaim in Ibsen’s John Gabriel Borkman at Dublin’s Abbey Theatre in 2009. In 2005 he directed the award-winning play My Name Is Rachel Corrie, based on the life of the American peace activist killed while protesting against Israel’s destruction of civilian housing in the Gaza strip.

Rickman directed two films, The Winter Guest (1997) and A Little Chaos (2014), in which he also played King Louis XIV. However, his most memorable screen presence in his later years was that of Severus Snape in the phenomenally popular Harry Potter series, beginning in 2001 and in which, over the subsequent films, he gave an ostensibly evil character a subtle dimension of pathos lurking beneath the malevolence.

A great humanitarian as well as a great actor, Rickman was active in a number of causes and organizations. He was vice-chairman of the Royal Academy of Dramatic Art; a patron of Saving Faces, a charity dedicated to helping people with facial disfigurement; and honorary president of the International Performers’ Aid Trust, which works to alleviate poverty in the world’s poorest regions. In a private ceremony in New York in 2012 he married Rima Elizabeth Horton (b. 1947), a former Labour Party councillor and economics lecturer. They had been partners since they met as teenagers in 1965 at Chelsea Art College. He died of pancreatic cancer on 14 January 2016 at the Wellington Hospital, Westminster, and was survived by her, and by his brothers, David and Michael, and sister, Sheila.