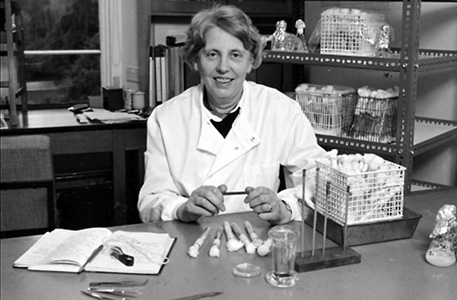 © by kind permission of the British Mycological Society Archives

Frankland [née Brown], Juliet Camilla (1929–2013), mycologist, was born on 30 January 1929 at High Barn Eaves, Effingham, Dorking, Surrey, the younger daughter of Walter Henry Brown (1893/4–1956), a civil servant in the Ministry of Works, and his wife, Gerda Lois, née Grenside (1885–1961), an artist. Gillian, her elder sister, was born in 1923. Juliet was a day pupil at St Teresa's School, Effingham. She went on to Royal Holloway College, University of London, in 1949 and studied botany, obtaining a first-class honours degree in 1952. She was awarded many prizes. She held a Royal Holloway College scholarship and a Nature Conservancy research studentship during her postgraduate research, from 1952 to 1956. She was made PhD, by the University of London, in 1957 for a thesis entitled 'An ecological study of the soil fungi of some British sand dunes'. Those dunes studied in most detail were alkaline ones at Sandwich, Kent, and acid ones at Studland, Dorset.

In 1956 Juliet Brown started work as a mycologist at Merlewood, Grange-over-Sands, Lancashire. Merlewood was run by the Nature Conservancy, later part of the Natural Environment Research Council. In 1973 it became part of the Institute of Terrestrial Ecology. It closed in 2003 and the remaining staff were transferred to the Centre for Ecology and Hydrology, Lancaster. The staff did a range of ecologically based work. Juliet Brown began by investigating leaf litter. Soon after she began work at Merlewood she met (Edward) Raven Percy Frankland (1918–1997), a farmer from Ravenstonedale, a village near Kirkby Stephen in Westmorland. His sister, Helga Frankland [see below], had been in charge of the Nature Conservancy in the north-west, and founded the Cumbria Wildlife Trust; his brother, Noble Frankland, was a well-known military historian; his father, Edward Percy Frankland, was a scientist and novelist; his grandmother was the bacteriologist Grace Frankland and his grandfather the chemist Percy Faraday Frankland; and his great-grandfather was the chemist Sir Edward Frankland. Raven and Juliet married on 3 June 1959 at the parish church in Effingham. They lived at Bowberhead, a farmhouse a few miles from Ravenstonedale. They did not have any children.

Raven Frankland had extensive lands, which included Pendragon Castle. This was built in the twelfth century, although local legend associates it with Uther Pendragon, the father of King Arthur. Raven and Juliet Frankland organized the repair of the castle and held archaeological digs in the summer. They also worked hard to preserve the numerous old stone walls on their land. They set up Piper Meadow as a wild flower meadow, later named Coronation Meadow by Prince Charles.

After she was married Juliet Frankland was self-employed as a mycologist. She usually only went to Merlewood once a week, as it was so far from Ravenstonedale. She set up many long-term investigations, for example on the fungal decomposition of bracken petioles, a project lasting five years. She had the insight to realize that it was important to study one common fungus and relate her ecological studies to this fungus. She selected Mycena galopus, a Basidiomycete common in Nature Conservancy woods in Cumbria. The mycelia could be cultivated on various media in the laboratory, enabling long-term experiments to be set up. In the woodland studied she used a plot of 10 m × 4.5 m and mapped the distribution of M. galopus using a 5 mm grid. The toadstools were marked with paint and weekly surveys done in the autumn. The data was punched into a computer tape and analysed.

In the 1980s, with the increased interest in atmospheric pollution, Juliet Frankland and others looked at the effects of dry-deposited sulphur dioxide and sulphite on saprotrophic fungi and on the decomposition of leaf litter. She had numerous postgraduate students from Britain and abroad with whom she co-operated in publishing over seventy papers. She edited several of the volumes resulting from the symposia of the British Mycological Society. She was elected a fellow of the Linnean Society in 1969 and president of the British Mycological Society in 1985. Her presidential address detailed her research.

In 1997 Raven Frankland died suddenly, leaving Juliet with the estate to manage. Her sister, Dame Gillian Brown, by now a retired diplomat (and former ambassador to Norway, 1981–3), came to help. Unfortunately she died suddenly at Bowberhead in 1999. Juliet found it increasingly difficult to cope with the demands of the estate and suffered severe depression. She had a slight stroke in 2008, and after a stay in hospital, moved into Stobars Hall, a care home in Kirkby Stephen. She died there on 9 June 2013 of dementia and cardiovascular disease. Her funeral was held at St Oswald's Church, Ravenstonedale.

Juliet Frankland’s sister-in-law, Helga Maud Toynbee Frankland (1920–2015), biologist and conservationist, was born on 17 September 1920 at Needlehouse, Ravenstonedale, Westmorland, the second of the three children of Edward Percy Frankland (1884–1958), sometime chemistry lecturer, farmer, and novelist, and his wife, Maud, née Metcalfe-Gibson (1885–1979). She was educated at Sedbergh School (the first girl to be admitted there), then at Howell’s School, Llandaff, Glamorgan. In 1938 she matriculated at St Andrews University to read zoology, but her studies were interrupted by the Second World War, when she joined the Land Army and worked on her family estate at Needle House. She returned to St Andrews, graduating BSc and in 1953 receiving a PhD for her thesis, ‘Helminth parasites of marine fishes: the biology of Diclidophora denticulata, a monogenetic trematode’. She then became a lecturer at the University College of North Staffordshire, helping establish its biology course. While there she published two novels set in her native Lake District, Dalehead (1955) and His Father’s Son (1958).

In 1959 Helga Frankland joined the Nature Conservancy, working at Merlewood Research Station, Grange-over-Sands, Lancashire. She was one of the founders and first trustees of the Lake District Naturalists’ Trust in 1962, subsequently the Cumbria Wildlife Trust. Her projects at the Nature Conservancy included directing research into the ecology of Cow Green in upper Teesdale, in advance of much of the area being flooded by a reservoir (constructed between 1967 and 1971), including its unusual Arctic and alpine plants such as the Teesdale violet; the area surrounding the reservoir was designated as a national nature reserve in 1969. She retired from what was by then the Nature Conservancy Council as north-west regional director in 1980, and thereafter spent several days a week volunteering for the Cumbria Wildlife Trust, becoming a vice-president in 1981. She was involved with the trust at every level, including running hedgerow surveys, botanical survey training for volunteers, and a children’s wildlife group. She also bred Dales ponies and worked on bridleways for the British Horse Society. She was appointed MBE in 1999 for services to conservation. Her history of the Cumbria Wildlife Trust was published in 2012. She died at her home, Needlehouse, Ravenstonedale, Westmorland, in the room in which she was born, on 7 January 2015. Her funeral was held at St Oswald’s, Ravenstonedale.