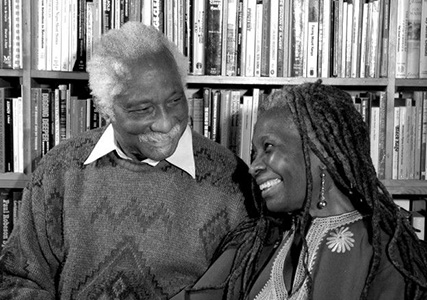 Huntley [née Carroll], Jessica Elleisse (1927–2013), publisher and community rights activist, was born on 23 February 1927 in Bagotstown, British Guiana, the only daughter and youngest of five children of James Carroll and his wife, Hectorine. Her father died when she was three, and her mother had to bring up her offspring in the rough area of Charlestown, Georgetown, often reminding them in the course of their strict upbringing: 'You may live in a tenement yard but you're not part of a tenement yard' (Andrews, 22). Jessica showed early academic promise, and a talent for public speaking, but financial constraints meant that she left secondary school before sitting exams. She took evening classes in shorthand and typing, skills that enabled her to find a job in a garment factory with the promise of a clerical position. Instead, she chose to side with the exploited women on the shop floor, articulating their grievances to the management. That instinct to confront situations of injustice and discrimination remained with her throughout her life.

When, in 1948, she met Eric Huntley (b. 1929), a postal worker active in the trade unions, it was the start of a committed partnership—in both personal and political terms—that would span six decades. They married on 9 December 1950, and grew to be 'like twins', in Eric's words (Stabroek News, 21 Oct 2013). Living for some time in the village of Buxton, they co-founded a political study group that met at their rented home. Their sons were born there: Karl (named after Marx) in 1951, Chauncey in 1952.

In April 1953 the country's first elections based on universal suffrage brought to government the People's Progressive Party (PPP), of which Eric Huntley was a founding member; in May Jessica Huntley co-founded the Women's Progressive Organization to represent women's issues in the PPP's fight for national liberation. Within months the colonial British government suspended the constitution and instituted a state of emergency. Eric Huntley, like other PPP members, was arrested for a minor misdemeanour and imprisoned for a year.

With few opportunities for permanent employment after his release, Eric Huntley made his way to Britain in 1957, hoping to enhance his work prospects. Meanwhile, Jessica became organizing secretary of the PPP and was persuaded to stand as a candidate at the general election. Despite popular backing, she was unsuccessful, but could now focus on plans to reunite her family. Leaving her sons in the care of her mother, she arrived in England in April 1958; not until 1962 could they afford to have the boys join them. For a while they were tenants in the north London home of John La Rose, himself an activist and recent migrant from Trinidad, who founded the first Caribbean publishing house in the UK in 1966, a year that also marked British Guiana's independence and renaming as Guyana. The following year, Jessica's daughter, Accabre, was born—named after one of the rebels in the 1764 Berbice slave uprising, a key event in Guyanese liberation history that, coincidentally and fittingly, was commemorated on Jessica's birthday, 23 February.

A pivotal moment came in October 1968: the Guyanese radical historian Walter Rodney was banned from re-entering Jamaica to resume his post at the University of the West Indies, and the Huntleys mobilized protest in England. With a group of concerned West Indians—including Richard Small, Ewart Thomas, and Andrew Salkey—they decided to challenge the ban by publishing and distributing Rodney's lectures and speeches. This led to the creation of Bogle–L'Ouverture Publications, honouring in name the Caribbean resistance heroes Toussaint L'Ouverture and Paul Bogle. Rodney's Groundings With My Brothers was the venture's first title in 1969, with Bogle–L'Ouverture going on to publish his influential work How Europe Underdeveloped Africa (1972), and a list of works by other notable authors including Bernard Coard, Andrew Salkey, Linton Kwesi Johnson, Lemn Sissay, Valerie Bloom, and Lucy Safo.

The Huntleys relocated to a house in west Ealing, initially using the front room as office and trade-counter but later, after complaints from the council, setting up shop in a local cul-de-sac, Chignell Place. Despite racist attacks by the National Front, the Walter Rodney Bookshop—as it was renamed in 1980 after the historian's assassination—remained open for eighteen years, not only hosting book launches and other such events but functioning as a community hub and informal advice centre.

An organizer and crucial participant in many struggles for justice, Jessica Huntley was associated with such initiatives as the Black Parents' Movement that campaigned against the controversial ‘sus’ (stop and search) laws, the supplementary school movement, the New Cross massacre action committee, the Keskidee Centre, Britain's first Afro-Caribbean cultural centre, and the International Book Fair of Radical Black and Third World Books, inaugurated in 1982 with Jessica as joint director alongside La Rose.

After experiencing health issues in her last years, Jessica Huntley died at Ealing Hospital on 13 October 2013, and was survived by her husband, Eric, and their children Chauncey and Accabre. Her elder son, Karl, predeceased her by two years, to the day. Her funeral, attended by hundreds, was held on 31 October at Christ the Redeemer Church, in Southall, and she was interred at Greenford Park cemetery.