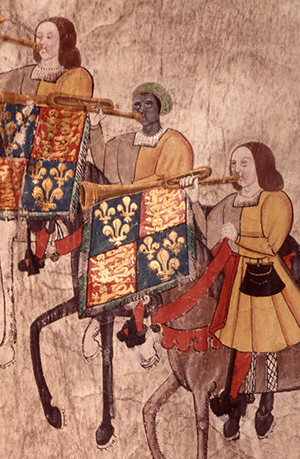 by unknown artist, 1511 [detail from the Westminster Tournament Roll]

College of Arms, Westminster Tournament Roll. Reproduced by permission of the Kings, Heralds and Pursuivants of Arms.

Blanke, John (fl. 1507–1512), royal trumpeter, was employed as a musician at the courts of Henry VII and Henry VIII, making his first recorded appearance there in 1507. He is thought to have been of African descent, but his age, place of birth, and parentage are unknown. His surname may have originated as a nickname, derived from the word blanc in French or blanco in Spanish, both meaning ‘white’. Blanke was part of a wider trend for European rulers to employ African musicians, dating from at least 1194, when turbaned black trumpeters heralded the entry of the Holy Roman emperor Henry VI into Palermo in Sicily. It has been suggested that Blanke arrived in England with Katherine of Aragon when she came to marry Arthur, prince of Wales, in 1501. While there is no record of Blanke's arrival, there is evidence of other Africans in Katherine's retinue, including Catalina, who was born in Motril, Granada. However, the Tudor court employed musicians from across continental Europe, and Blanke may have come from Spain, Portugal, or Italy, all of which had growing African populations at this time.

Between 1507 and 1512 Blanke was one of eight royal trumpeters under the leadership of Peter de Casa Nova. The first payment to 'John Blanke, the blacke Trumpet' was made in early December 1507, when he was paid 20s. (8d. a day) for his services in the previous month (TNA: PRO, E 36/214, fol. 109). Monthly payments for the same amount continued throughout the following year. Blanke played at the funeral of Henry VII on 11 May 1509, when he wore black mourning livery, and then at the coronation of Henry VIII on 24 June, when he was dressed in bright scarlet. Following the death of the Italian trumpeter Domynck Justinian (last recorded as performing at Henry VIII's coronation), Blanke successfully petitioned the king to grant him Justinian's position and wage of 16d. a day. He complained that his current wage was 'not sufficient to mayntaigne and kepe hym to doo your grace lyke service as other your trompeters doo' and asked that his 'true & faithfull service' be considered, adding that he intended to continue to serve the king 'during his lyf' (TNA: PRO, E101/417/2, no. 105). On 12 and 13 February 1511 Blanke played at the Westminster tournament, a flamboyant Burgundian-style joust held to celebrate the birth of the short-lived Prince Henry on new year's day. The event would have required many fanfares, and the royal trumpeters were paid more than ten times their daily wage.

John Blanke is depicted twice on the 60 foot long Westminster tournament roll of 1511, which was produced in the workshop of Thomas Wriothesley, Garter king of arms. He is shown first riding a grey horse with a black harness. All the trumpeters wear yellow and grey livery, while their double-curve instruments are decorated with the royal quarterings. The trumpeters appear again at the end of the day's jousting. Here, in the more frequently reproduced portrait, Blanke's horse is shown as black with a crimson harness. His dark face contrasts strikingly with those of his companions, but his one visible hand, holding the trumpet, is incongruously shown as white. In both depictions Blanke wears a turban, which is brown and yellow in the first image, and green with a linear design in gold in the second, while his companions are bareheaded.

John Blanke married in January 1512, though the identity of his wife is unknown. Henry VIII sent the great wardrobe a warrant, dated 14 January, to deliver to 'John Blak, our trompeter', a gown of violet cloth, and also a bonnet and a hat, 'to be taken of our gift against his marriage' (PRO: TNA, E 101/417/6, no. 50). After this no further reference to Blanke has been found in the royal records and he is not mentioned in the full list of trumpeters on 31 January 1514. That he achieved a prominent position in the royal household, was paid wages, negotiated an increase in his pay, and was able to marry, suggest that Blanke was not enslaved.

John Blanke is the only identifiable black person portrayed in sixteenth-century British art. Alongside his relatively high-status occupation and connection to Henry VIII, this has made Blanke the most widely recognized and cited example of an African in Tudor England. In the first decade of the twenty-first century Blanke featured in teaching resources including BBC programmes for seven- to eleven-year-olds, and in the National Archives' guide to black history; his image was the most requested for reproduction of those held by the College of Arms. From 2003 he featured in the National Trust's annual ‘Black History Month’ exhibition at Sutton House, Hackney.