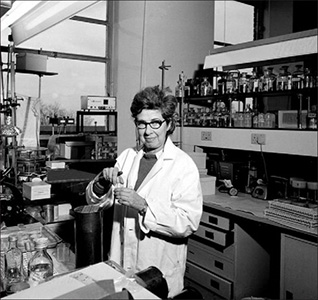 Askonas, Brigitte Alice [Ita] (1923–2013), immunologist and biochemist, was born on 1 April 1923 in Vienna, the second child and only daughter of Czech parents who were Jewish converts to Catholicism, Carl Frederick (later Charles Frederick) Askonas (1893–1946) and his wife, Rose, née Fürth (1891–1980). Her father and his brother owned knitting mills in several European countries. In March 1938, shortly after the Anschluss which united Austria and Germany, the family left Vienna, eventually arriving in New York and finally settling in Montreal, Canada, in 1940. Brigitte Askonas spent two years at Wellesley College, Massachusetts, before going to McGill University, Montreal, gaining a BSc in biochemistry in 1944 and an MSc in 1949. She then went to the University of Cambridge, where she obtained her PhD in 1952 for a thesis on muscle enzymes supervised by Malcolm Dixon.

Brigitte Askonas, known to all as Ita, joined the staff of the National Institute for Medical Research in Mill Hill in 1952. There she worked for thirty-six years until her retirement in 1988, initially in the division of biochemistry and from 1957, when it was formed, the division of immunology, of which she became head in 1976 on the retirement of its founding head, John Humphrey. She spent sabbatical years in the department of bacteriology and immunology at Harvard medical school in 1961–2 and at the Basel Institute for Immunology in 1971–2. She was also a visiting professor in the department of medicine of St Mary's Hospital medical school, London, from 1988 to 1994. After her retirement from the National Institute for Medical Research she continued her interest in immunology research through advising scientists at all levels as a regular and welcome visitor to the departments of leukocyte biology and respiratory medicine at Imperial College, London, and the Weatherall Institute of Molecular Medicine in Oxford until a few months before her death.

At the National Institute for Medical Research Askonas initially studied how milk proteins are made but found it difficult to purify milk proteins because of the sticky nature of casein, the main milk protein. These studies were also carried out in a goat injected with large quantities of 14 carbon-labelled amino acids, and she found it difficult to milk and bleed the goat at the precise intervals required. Her interest in the then nascent science of immunology was roused when John Humphrey demonstrated in a seminar how adding purified antigen to serum containing antibodies caused the antibodies to precipitate. This resulted in Askonas focusing her subsequent career on the immune system, beginning with a study of the assembly and secretion of antibodies in animals that had been injected with antigens. She then focused on the behaviour of B lymphocytes, white cells which produce antibodies, showing that antibody-secreting cells were found not only in the lymph tissue but also in the bone marrow and lungs. She was the first to clone memory B cells and established that B cell clones produce specific antibodies that dominate neutralizing responses to the antigen stimulating them. Very little was known about the way the immune response deals with antigens. Askonas showed that the antigens are taken up and partly degraded by macrophages so that a small amount of antigen is retained by these cells. Macrophages containing antigen remnants very efficiently induce the production of neutralizing antibodies by B cells.

For these studies Askonas was elected a fellow of the Royal Society in 1973. Three years later, when she became head of the division of immunology, she changed direction and began working on the immune response to infection. She briefly studied immunosuppression during trypanosomiasis, but focused on the cell-mediated response to viruses, particularly influenza, and also respiratory syncytial virus. She was among the first to clone cytotoxic T lymphocytes, which kill virally infected cells, and she and her colleagues showed that, unexpectedly, the T cells do not distinguish between influenza virus variants within a serotype. These studies paved the way to understanding viral presentation to T cells, where her PhD student Alain Townsend went on to make seminal findings for which in her characteristically honest and generous way she refused to accept any credit.

Askonas's insight and vision were extraordinary and everyone who knew her realized what a special person she was. Her lasting influence came from a number of qualities. Her biochemical background brought the precision and rigour of molecular science into immunology. The width and depth of her experience as well as its quality, continuing over six decades, were other reasons for her lasting impact. Although she insisted on the highest level of rigour and scientific integrity and was a strict and most persistent critic, she was tireless in her support of her former students and delighted in mentoring subsequent generations, helping them in many thoughtful and generous ways. Her human warmth and enjoyment of sharing her knowledge and experience of research filled those fortunate enough to be mentored by her with enthusiasm for immunology as well as instilling great respect and affection.

Outside her passionate interest in immunology, Askonas had a profound appreciation of the visual arts and classical music. Every summer she enjoyed her other non-scientific passion, swimming in the sea, and for many years coupled these interests in the summer schools held each year under the auspices of NATO and the European Federation of Immunological Societies in Greece. Here, as in the laboratories where she worked, she influenced many young scientists from all over the world.

Ita Askonas was a modest woman who rarely spoke about her achievements, and although she was actively involved in immunological research all her long life, after her retirement in 1988 until her death in 2013 she rarely accepted authorship on papers. She received an honorary DSc from her alma mater, McGill University, in 1987, foreign membership of the American National Academy of Sciences and the Robert Koch gold medal of the Robert Koch Foundation in 2007, and an honorary DSc from the University of Oxford in 2010. She was devoted to the University of Cambridge, which awarded her an honorary DSc in 2012, because, as she said, she learned during her time in its department of biochemistry, which included two of the first four female fellows of the Royal Society, that good science gets recognition regardless of the gender of the scientist. She never married, and lived for many years in Highgate, with a weekend retreat in Bletchington, Oxfordshire. She died in Camden on 9 January 2013, of cancer. She was cremated and her ashes were placed in a field at Bletchington, where she had spent many happy times.