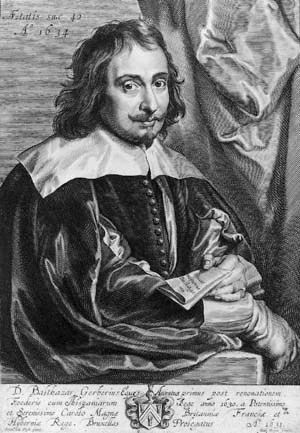 Gerbier, Sir Balthazar (1592–1663/1667), art agent, miniature painter, and architect, was born on 23 February 1592 at Middelburg in the Netherlands, the son of Antonie Gerbier and Radigonde Blavet, who were Huguenot émigrés. Gerbier later styled himself Baron d'Ouvilly, or Doully. Little is known about his early upbringing or education, and Gerbier's own claims invite scepticism. He certainly studied drawing and penmanship while in the Netherlands, perhaps with Hendrik Goltzius in Haarlem. In 1620 Gerbier published a verse lament on Goltzius's death (Eer ende claght-dicht) which evokes an imaginary procession of grieving artists led by Peter Paul Rubens.

Gerbier's surviving works are miniatures and pen-and-ink portraits datable to 1616–19. He introduced the table-book leaf (a sheet of card, prepared with gesso on each side, used as a backing for vellum) into England. Several of Gerbier's portraits of the Dutch nobility are dated after he left the Netherlands and so were not made from life. Nevertheless, Gerbier kept an eye on the house of Orange and in 1658 presented a volume of calligraphy (Koninklijke Bibliotheek, The Hague) to Princess Mary for the education of the young William III.

Keeper of the York House collection

In 1616 Gerbier accompanied Noël de Caron, ambassador from the states general, to London. According to William Sanderson he lettered the ten commandments in Austin Friars, 'his first rise of preferment' (Graphice, 1658, 15). He joined the household of George Villiers, marquess of Buckingham (later first duke), in 1619, becoming his factotum, agent, and the keeper of the picture collection. In July of that year he went to Hainault, where he bought nine paintings by Veronese from the collection formed by Charles de Croy, duc d'Aarschot. Gerbier travelled to Italy in 1621 where he acquired a number of sixteenth-century pictures for Buckingham, among them Titian's large and important Ecce homo (Kunsthistorisches Museum, Vienna) which cost the huge sum of £275, as well as works by living artists, notably Guido Reni. Gerbier showed great expertise as an art agent and was allowed to act independently by Buckingham.

In 1624–5 Gerbier supervised the remodelling of York House, Buckingham's mansion on the Strand. His work, which incorporated a marble fireplace and gateway presented by Dudley Carleton, Viscount Dorchester, was said by Gerbier to have disconcerted Inigo Jones (Goodman, 2.360). He may also have designed the Water Gate (sometimes attributed to Nicholas Stone) which survives in Embankment Gardens, London. Although Gerbier was versatile and increasingly indispensable, his position in the household was sometimes troubled. In 1628 he feuded with Orazio Gentileschi (an Italian artist employed by Buckingham) who would not endorse the 'merritt and vallue' of pictures that Gerbier had bought (TNA: PRO, SP 133/29, fols. 44r–45r).

Gerbier was trusted with Buckingham's ciphers, and was sent on a diplomatic mission to Brussels in 1622, although at this time he was more the duke's creature than the king's. In 1623–4 he accompanied Buckingham and the prince of Wales on their visit to Madrid to woo the Spanish infanta. When Giambologna's Samson Slaying a Philistine (V&A) was presented to the prince of Wales (who in turn gave it to Buckingham), Gerbier arranged its transportation to London where it was installed in the gardens at York House.

Gerbier travelled to Paris late in 1624 for the proxy marriage of Charles I and Henrietta Maria. During the visit he used unscrupulous methods to force Nicolas Chevalier, président of the chambre des comptes, to part with works from his collection, but met with resistance from duc Henri II de Montmorency who would not relinquish Michelangelo's Slaves (Louvre Museum, Paris). In 1625 Gerbier met Rubens in Paris, perhaps for the first time, and they were to remain in intermittent contact until the artist's death in 1640. Gerbier returned to Paris in 1627 bearing letters from Buckingham to Richelieu. He then travelled to Delft where he met Rubens on 21 July. The two men used the purchase of Rubens's collection by Buckingham as cover, but were in reality negotiating what Sir John Coke called 'delusory treaties' between Britain and Spain (R. Lockyer, Buckingham, 1981, 395).

After the assassination of Buckingham in 1628, Gerbier reminded the king of his devotion by becoming a British national and taking the oaths of allegiance and supremacy. The lord treasurer, Richard Weston (first earl of Portland), then succeeded Buckingham as Gerbier's patron to some extent. Between 1628 and 1632 Gerbier directed the rebuilding of Weston's house, Putney Park at Roehampton (dem. c.1775). Gerbier also supervised two sculptural commissions for him: a bronze equestrian statue of the king for the gardens at Roehampton made by Hubert le Sueur in 1629–30 (Trafalgar Square, London) and Weston's monument in Winchester Cathedral designed by Isaac Besnier.

Rubens visited London from May 1629 to February 1630 in the hope of negotiating a truce between England and Spain. In his own words Gerbier acted as 'innkeeper' (Sainsbury, Original … Papers, 144) but was paid handsomely by the king for his pains. Rubens may have begun a group portrait of Gerbier's wife, Debora Kip (b. 1601), whom he had married in 1618, with four of their children at this time, although the best surviving version (National Gallery, Washington) raises problems of authorship and dating. Their eldest son, George Gerbier D'Ouvilly, became a playwright and translator. Gerbier later commissioned an enlarged version from an artist in the circle of Rubens (Royal Collection) which included his portrait. Before Rubens's departure, Gerbier sold a diamond ring and hatband to the king for £500 for presentation to the artist.

In 1631 the king appointed Gerbier as his agent in Brussels, where he was soon occupied with matters political and artistic. He had frequent dealings with artists, including Van Dyck, who restored a damaged Vitellius by Titian (lost) for the king. In 1631 Gerbier bought a Mystic Marriage with St Catherine (identification uncertain) for Weston. It was sold by Solomon Nobliers as an original by Van Dyck, but, for reasons unknown, the artist chose to repudiate the work and embarrass Gerbier.

Gerbier was involved with two major decorative projects for the royal palaces. From 1634 onwards he arranged the dispatch of Rubens's ceiling paintings for the Banqueting House in Whitehall, and tried to obtain payment for the artist. From 1639 Gerbier, together with Edward Norgate and the Abbé Cesare Alessandro Scaglia, were involved in obtaining a series of pictures for the cabinet in the Queen's House, Greenwich, depicting the story of Cupid and Psyche. Gerbier favoured Rubens, but Jacob Jordaens got the job and delivered the first picture in May 1640. Following Rubens's death in the same month Gerbier translated the inventory of his collection, the Specification, and sent it to the king.

Gerbier's achievements as a diplomat were less substantial. He implemented the king's policy of supporting those Flemish aristocrats who resented the Spanish ascendancy in Brussels, but then sold their names to the Archduchess Isabella for 20,000 crowns. Despite this duplicity Gerbier retained the confidence of the king and was knighted on 22 October 1638.

Gerbier returned to London and became master of ceremonies in April 1641. He proposed the creation of an international bank and pawnbrokers, a scheme which was wisely ignored. In June Gerbier disgraced himself in the House of Lords by accusing Lord Cottington of his own betrayal of the king's plans in Brussels. He was described as 'utterly lost' (CSP dom., 1641–3, 36) and Charles Cotterell became de facto master of ceremonies in July. Adding insult to injury, Gerbier (who was no papist) saw his house ransacked and his pew in the local parish church destroyed. He was now a discredited figure and departed for France in 1643, but scandal followed him to Paris where his daughter Elizabeth converted to the church of Rome and took refuge in a convent.

Gerbier and the Commonwealth

It was only after the king's execution in 1649 that Gerbier felt able to return to London, where he busied himself writing pamphlets and devising preposterous schemes. While abroad, he had inherited a house in Bethnal Green from his father-in-law, Willem Kip, a jeweller and engraver, who died in 1646. This enabled him to open an academy for young gentlemen, which was effectively a school for spies since the curriculum included horsemanship, foreign languages, cosmography, and the construction of military fortifications. It opened in July 1649 and closed in August 1650.

On 20 April 1653 Gerbier, together with George Geldorp and Peter Lely, offered to paint a series of pictures at Whitehall of 'the most remarkablest Battails' of the civil war (BL, Stowe MS 184, fol. 283). In similar vein, Gerbier was the anonymous author of The None-Such Charles his Character (1651), a hypocritical attack on the king and his purchase of 'old rotten pictures', but he had no qualms in acquiring Van Dyck's Equestrian Portrait of Charles I (National Gallery, London) and Titian's Charles V with a Hound (Museo del Prado, Madrid) at the dispersal of the king's goods, quickly selling them at a profit.

In the 1650s Gerbier's stratagems became increasingly desperate. Briefly considered of use to the Commonwealth, he was sent as an agent to The Hague in August 1652, and again in 1658 to spy on royalists in exile, but lacked all credibility. He then persuaded the states general to support an expedition to Guiana in search of gold, embarking in August 1659. His daughter, Catherine, was murdered during a mutiny on 7 May 1660, and Gerbier returned to Amsterdam where, in a spate of pamphlets, he declared himself the victim of conspiracy.

The Restoration and architecture

Gerbier, together with Peter Mills, designed the triumphal arches that welcomed Charles II into London in 1661. He tried to regain the post of master of ceremonies but was immediately suspended. In the face of royal disdain, Gerbier turned to architecture and entered the service of William, first earl of Craven, remodelling his house at Hampstead Marshall in Berkshire (destr. 1718) for which a number of drawings survive (Bodl. Oxf.). Gerbier was assisted by Captain William Winde who continued the work after his death. Gerbier was uncharacteristically reticent about his practice as architect, thinking it beneath him, but he published A Brief Discourse Concerning the Three Chief Principles of Magnificent Building in 1662, and the Counsel and Advise to All Builders in 1663. Gerbier died at Hampstead Marshall either in 1663 (according to a petition to the king from his daughters who asked for £4000 in unpaid salary) or in 1667 (according to Gerbier's monument in the local church). He was also buried there. The earlier date limits the work he could have achieved at the house and implies a more substantial role for Winde.

According to William Sanderson, Gerbier 'had little of Art or merit' (Graphice, 1658, 15), and Samuel Pepys said one of his books was 'not worth a turd' (Pepys, Diary, 28 May 1663). Gerbier's main achievement was the creation of the picture gallery at York House, and it is this aspect of his career which has received most attention in recent years. As a diplomat Gerbier was at least a credible negotiator with Rubens but his period of service as agent in Brussels was lamentable, even by the low standards of Charles I's ambassadors. The stratagems of Gerbier's later years reveal the desperation of a courtier deprived of a court, but the Restoration created opportunities in country house architecture which were cut short by his death.