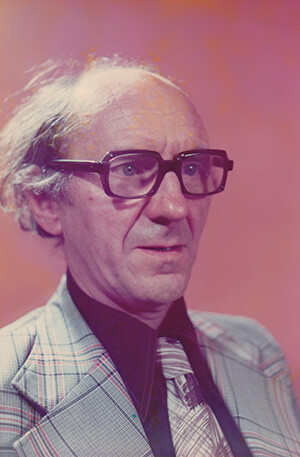 Horsfall, Allan (1927–2012), gay rights campaigner, was born on 20 October 1927 in the Emmott Arms, Laneshawbridge, Colne, Lancashire, the son of the publican, Tom Horsfall, and his wife, Elizabeth Ellen, née Ratcliffe. After education at Nelson grammar school, he served in the Royal Air Force. It was at a servicemen's association meeting in 1947 that he met his life partner, Harold Pollard (1908–1996), a teacher who later became a headteacher and chairman of the Campaign for Homosexual Equality. Setting up house together, they remained partners until Harold's death, residing for much of their lives at 91a Longcauseway, Farnworth, Bolton.

After the RAF, Horsfall went on to work as a clerk for the National Coal Board from 1959 to 1971 and later for the Salford education committee. From the late 1950s to the early 1960s, he was a Labour councillor in Nelson, secretary of the Northern New Left Clubs Committee, and chair of the North-East Lancashire Campaign for Nuclear Disarmament. He later campaigned for improved bus services as a co-founder and executive member of the National Federation of Bus Users, also serving on the consultative committee of the Greater Manchester Passenger Authority.

Horsfall was best known for his pioneering work for homosexual law reform and the wider human rights of lesbian, gay, bisexual, and transgender (LGBT) people. He was, arguably, one of the grandfathers of the gay rights movement in Britain, notching up a campaigning record spanning more than fifty years—beginning in 1958, when he joined the newly formed Homosexual Law Reform Society (HLRS). This had been established with the aim of securing the implementation of the 1957 Wolfenden report, which had recommended the partial decriminalization of male homosexuality. Horsfall had hopes of Labour support but was appalled when his local party resisted Wolfenden. This helped convince him that gay-led pressure group campaigning was the way forward. But he was not persuaded that HLRS had the right composition or approach. It focused on winning the support of establishment figures, such as politicians, writers, academics, and church leaders. Moreover, gay members of the HLRS, such as Antony Grey, hid their sexuality, believing, with considerable justification, that if their gayness became known publicly it could damage their cause, as well as leave them and their partners open to prosecution. The HLRS was too élitist, London-centred, aloof, intellectual, and closeted, in Horsfall's view. Supporters had no say in the running or direction of the organization. Horsfall saw the need for a democratic, down-to-earth campaign group that would take the case for law reform out into the provinces; and in which gay people would take the lead and be open about their sexuality. Being out and proud was, according to Horsfall, one of the most effective ways to debunk prejudice and stereotypes.

In 1964 Horsfall played the prime role in founding Britain's first ever grassroots, gay-led homosexual campaign group, the Manchester-based North-West Homosexual Law Reform Committee (NWHLRC). Horsfall lived in the mining village of Atherton, Lancashire, at the time. He used his home address and phone number as a public contact point. It was a brave thing to do. Many people thought him foolhardy for being so open, fearing that he would be attacked or evicted from his coal board house. There was, however, very little hostile reaction. This refuted claims by some Labour MPs that they could not support the decriminalization of homosexuality because their mining constituents would object.

Horsfall saw the Wolfenden recommendations as a brave but flawed first step, being highly critical of the limited decriminalization proposed. He was particularly scathing about Wolfenden's refusal to support public initiatives for the implementation of his report. As he said in 1996, Wolfenden

refused to send a message of support to a public meeting we organised in Manchester in 1966 to discuss his proposals. Once the report was finished, Wolfenden washed his hands of it. He didn't want anything more to do with homosexual law reform.

When the Sexual Offences Act was passed in 1967, the HLRS faded. Most of its supporters believed their goal had been achieved. Horsfall disagreed. Many aspects of gay life remained unlawful. Decriminalization applied only in very narrow circumstances—not in Scotland or Northern Ireland and not in the armed forces or merchant navy. Sexual offences law continued to embody profound discrimination. As well as a higher age of consent for sex between men (twenty-one, compared to sixteen for heterosexual relations), the facilitating, inviting, and aiding and abetting of some male homosexual acts remained punishable by up to five years' imprisonment. No such restrictions applied to comparable heterosexual behaviour. For Horsfall, the battle was far from finished.

One of the positive benefits of decriminalization was that gay men felt less vulnerable to prosecution and blackmail. This emboldened many to join NWHLRC. Very quickly it became transformed into a nationwide organization and was renamed the Campaign for Homosexual Equality (CHE) in 1971. During the 1970s and 1980s, CHE was the UK's largest ever democratic, mass membership LGBT rights organization in the UK, with over 5000 members in more than 130 local groups all over England and Wales. Horsfall was CHE's first secretary and then later its president, a post he held from 1974 until his death. As well as lobbying parliament and local authorities, CHE helped change the way public institutions treated LGBT people by speaking to meetings of teachers, social workers, police, clergy, journalists, doctors, and prison officers.

For much of the 1970s and 1980s, Horsfall and other CHE campaigners, such as Glenys Parry and Griff Vaughan Williams, were leading public voices against homophobia and for LGBT equality, giving hundreds of talks and media interviews that helped change hearts and minds. CHE also provided advice and support to thousands of vulnerable and victimized LGBT people—transforming lives for the better and helping shape the modern gay identity and community. The organization also played a role in the establishment in 1978 of the International Lesbian and Gay Association, the global federation of LGBT organizations.

Horsfall's campaigning continued unabated in the 1990s. In 1997–8 he co-led—with the broadcaster Ray Gosling and the activist Peter Tatchell—the campaign to defend the 'Bolton Seven'. These seven men were facing jail for group sex under Britain's antiquated, homophobic sex offence laws, which criminalized same-sex acts involving the participation or mere presence of more than two men. Although convicted, they were spared prison sentences—in part because of the public support for the men that Horsfall's campaign generated. Under his guidance, the convicted men went on successfully to challenge their convictions in the European Court of Human Rights, which led to the eventual scrapping of the ban on homosexual group sex in 2003.

Horsfall was involved in the second wave of gay law reform from 1999 onwards, which ended the ban on gay people serving in the military, equalized the age of consent at sixteen, repealed section 28 of the Local Government Act 1988 (which prohibited local authorities from 'promoting' homosexuality), introduced civil partnerships, allowed gay couples to adopt children, and gave LGBT people protection against discrimination. Crowning it all was the passage of the Sexual Offences Act 2003, which ended homophobic bias in the penal code, finally repealing the 'buggery' law which dated back to 1533 and the 'gross indecency' statute of 1885, which was used to jail Oscar Wilde. In his latter years, Horsfall bravely championed the unpopular cause of gay and bisexual men whom he believed to be falsely accused of sex abuse, supporting them and advocating on their behalf.

Although much of his life was spent working for law reform, Horsfall sympathized with the more radical queer politics of activist groups like OutRage! in the 1990s. He saw direct action as necessary in the face of establishment intransigence to LGBT equality. Indeed, he encouraged and supported each new generation of LGBT campaigners. A contemporary of American gay rights pioneers Harry Hay and Frank Kameny, and predating Harvey Milk's activism by two decades, Horsfall ranks with fellow British homosexual law reform lobbyists Antony Grey, Jackie Forster, and Tony Dyson as one of the truly great pioneers of LGBT equality in Britain.

A warm-hearted, generous, and much-loved humanitarian—and humanist—Horsfall was remembered with admiration and affection by those who knew him. Gay law reform and the CHE were his two great legacies. He was still campaigning for LGBT rights until a few months before he died of heart failure in the Royal Bolton Hospital on 28 August 2012.