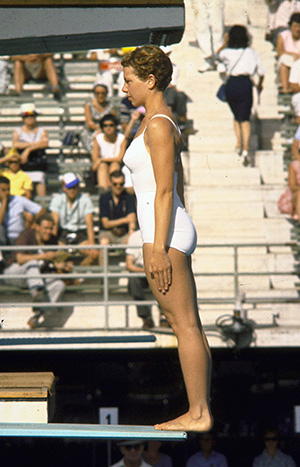 Ferris, Elizabeth Anne Esther [Liz] (1940–2012), diver, doctor, and campaigner for gender equality in sport, was born on 19 November 1940 at the Mary Stanley Nursing Home in Bridgwater, Somerset, the second of three daughters and third of four children of Roy Ferris (1903–1975), dairyman, and his wife, Dorothy Philomena, née Roth (1904–1990). At the time of her birth her mother was lodging at 30 Victoria Road, Bridgwater, but the family home was at 17 Ingestre Buildings, Ingestre Place, Soho, London, and Ferris was brought up in central London. She attended the Francis Holland School in Marylebone and was a member of Mermaids Swimming Club, based in Hampstead, which had a fine tradition of training female Olympic swimmers and divers dating back to the 1920s. Her introduction to diving, though, was far from promising, as she evidently belly-flopped on her first attempt. With training and perseverance she flourished, and won her first national title in 1957. The following year she competed in two major international events, finishing sixth in the three-metre springboard event at the European championships in Budapest, and gaining the bronze medal at the British empire and Commonwealth games in Cardiff.

Ferris made the British team for the 1960 Olympic games in Rome. Competing in the three-metre springboard event, she finished in third place behind Ingrid Krämer of Germany and Paula Jean Myers-Pope of the USA in gold and silver positions respectively. The following year Ferris won gold medals in the springboard and platform events at the Universiade in Sofia, and was also recognized by the Amateur Swimming Association as Britain's diver of the year and honoured with the George Hearn trophy. Her last major event came in 1962, when she travelled to Perth, Western Australia, for the British empire and Commonwealth games, and added a silver medal to her collection.

During this period of international competition Ferris had been studying medicine at the University of London, and she retired from diving after Perth to concentrate on her career. After qualifying as a doctor at the Middlesex Hospital in 1965 she worked in hospitals in London and Gloucestershire. On 8 May 1968 she married Robert Tyson Knights (b. 1942), a theatre director and later professional photographer, but the marriage was short lived, and she married, second, on 12 November 1973, Julian Steven Melzack (b. 1940), a Canadian-born university lecturer in the philosophy of science who subsequently worked as an investment banker. They had one child, Sophie (b. 1978).

While Ferris's career was in medicine she remained active on a number of other fronts. She helped to establish both the British Olympians Club and the World Olympians Association as networks for former competitors, and she served as the vice-president of the global body. She also used her position as an Olympian, and her medical knowledge, to promote the cause of women's sport. In 1976 she was a delegate to the International Olympic Committee (IOC)'s first conference on women in sport. At this time women made up only 20.7 per cent of the total competitors at the summer Olympics and 20.6 per cent at the winter Olympics, with far fewer sports open to them than to men at both festivals, and Ferris quickly emerged as a leading advocate of change. She did this both through conferences and commissions, and through her writing, notably her pioneering article 'Sportswomen and medicine', published in the Olympic Review in 1979. In this, she challenged commonly held beliefs about the impact of menstruation, motherhood, and hormones on sportswomen's performances, and she criticized the IOC's sex testing system, which had been introduced in the 1960s, as being ineffective. Particular anger was aimed at the growing practice of testosterone doping, with its awful side effects for sportswomen: 'it is a sad reflection on sport today that such risks are considered worthwhile and necessary' (Sportswomen and medicine, part 2, Olympic Review, 140, 1979, 338). Thanks in part to Ferris's advocacy some sporting bodies initiated a review of their gender verification techniques in the 1980s. Ferris served on the International Amateur Athletics Federation's working party on the subject, and later on the IOC's medical commission, and she co-authored numerous articles for academic journals on the issue. Her campaigning eventually bore fruit, particularly when she helped to defend the right of the South African athlete Caster Semenya to compete as a woman after her high-profile gender test in 2009. The key legacy of this campaign came in 2012 when the IOC published its new regulations on female hyperandrogenism, and while these remained open to criticism, they were a major advance on the old sex tests against which Ferris had campaigned.

As well as the medical debates about women and sport Ferris worked on gender equality in political and social settings, too, most notably through her work on the IOC's women and sport commission from 1995. She also dedicated some time to promoting sport and exercise at grassroots level, with her book Forty Plus: Ultimate Fitness Guide, co-authored in 1992 with Andy Ripley, serving as a guide for healthy and active lifestyles for the middle-aged.

Ferris's contribution to the cause of women at the Olympics was widely recognized. The IOC awarded her the Olympic order in 1980, and in 2011 the British Olympic Association (BOA) awarded her their first lifetime achievement award. The BOA's chairman, Lord Moynihan, cited Ferris's dedication to sport 'on and off the field of play' and her medical work as the basis for the award, and Ferris conveyed a clear sense of her achievements in her acceptance:

Women are almost at parity at the Olympic Games in terms of the number of competitors, only just under half, but we've really made huge strides over the last 15 years in getting female athletes competing on an equal level at the Games … I hope winning this award will encourage girls in sport and show that women have an important role to play.

It was fitting that this achievement came less than a year before the 2012 London Olympic Games, the first at which all sports were opened to women. Sadly, Ferris did not live to see this vindication of her work. She had been suffering from breast cancer since 2008, and she died from the disease at her home in Lechlade, Gloucestershire, on 12 April 2012, three months before the Olympics started. She was survived by her husband and daughter.

Ferris's international sporting achievements—an Olympic bronze medal and two empire games medals—were relatively modest, although it is worth noting that at the time of her death no British woman had won an Olympic medal in diving since Ferris's bronze in Rome. Her legacy, however, rested in her tireless work to improve opportunities for women in the Olympic games, and her scientific work on the biology of gender, which helped to change the IOC's restrictive and blunt definitions of male and female bodies. Any claims that the Olympic games have towards gender equity and a scientific understanding of the gendered body rest, in part, on Ferris's work.