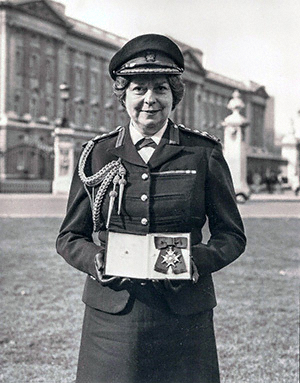 Field [née Hodgson], Anne (1926–2011), army officer, was born on 4 April 1926 at 34 Stanger Street, Keswick, Cumberland, the daughter of Harold Derwent Hodgson (1884–1964), a former captain in the Royal Engineers who eventually ran the family building company, Isaac and Robin Hodgson Ltd, and his wife, Annie Helena, née Usher (1896–1990); both parents were from Keswick families. She was educated at Keswick School and St George's School, Harpenden (which had been founded in 1898 in Keswick before being moved south in 1907). Leaving the London School of Economics without taking a degree, she joined the Auxiliary Territorial Service (ATS) in September 1947 'because I had been exempt from call-up … a student during the war', she later wrote (Anne Field to Roy Terry, Sept 2004, NAM, 2004–09–157–21).

Beginning as a lance corporal clerical instructor, Anne Hodgson gained her commission in December 1948. Like the army's male cadets, she benefited from war-experienced tutors. The ATS formally became the Women's Royal Army Corps (WRAC) on 1 February 1949; simultaneously she, her fellow officers, and servicewomen became subject to the Army Act, entire, for the first time. After a UK platoon command she was posted to Singapore, where she had charge of 400 WRAC personnel from 1951 to 1953, during a dangerous period of the Malayan emergency. Then, after attending the WRAC Staff College at Frimley Park in 1953, she took up staff and regimental duty appointments in the War Office, with London University WRAC Officer Training Corps, and as adjutant of 317 (Scottish) TA Battalion WRAC in Stirling and Catterick. On 17 March 1956 she married Captain Anthony Field (b. 1927), then serving in West Germany with the British army of the Rhine. The marriage was dissolved in 1961.

In 1961 Anne Field was promoted to major and chief instructor at the WRAC Centre, Guildford, commanded by the renowned Colonel Lucy Davies, with whom she shared a love of horse-racing, style, and a sense of fun. Her next posting, to headquarters, Middle East command, in Aden as a grade 2 staff officer during the emergency in 1963, encouraged a more serious side: 'there were people lobbing grenades into places … we had curfews, [but] we did our job and got on with it', she noted (Anne Field to Roy Terry, Sept 2004, NAM, 2004–09–157–21). There she was responsible for administering conditions, discipline, and welfare of soldiers and their families in south Arabia, and for WRAC personnel employed with the Royal Signals and Royal Military Police, and as clerks. Early in 1964 Radfan tribes of the western Aden protectorate rebelled. Her fact-finding trip up-country enhanced her work for casualties and their families. This was a turning point in her career, as her male colleagues recognized her abilities. Her no-nonsense attitude to roughing it and straightforward way of questioning were recalled when she became patron of the Aden Veterans' Association in 2002.

Promoted lieutenant-colonel in 1968 with a Ministry of Defence appointment, Field went next to Germany as assistant director, WRAC, with the British army of the Rhine. She travelled widely across Germany visiting units and discussing policy matters with her male colleagues, significantly including manning. In 1971, by now a full colonel, she was made commandant of the WRAC College, Camberley. Responsible for training regular and TA officer cadets, warrant officers, and NCOs, she also set up close links with the Royal Military Academy, Sandhurst, and successfully negotiated the inclusion of the WRAC College as the academy's fourth college, a serious step towards women's integration into the army.

The intensification of the Northern Ireland troubles found Field advocating new roles for WRAC officers, some as hazardous as those of the men. By the early 1970s manpower shortages demanded that women would best be recruited directly into the corps of their choice, rather than merely attached to those reflecting their specialist skills. Field devised means of expediting this, first as deputy director at headquarters, UK land forces, from 1975 and then, promoted brigadier, as director, WRAC, and honorary aide-de-camp to the queen, from 1977 to 1982. During her tenure as director, through regular visits to WRAC units in places outside the United Kingdom, such as Cyprus or northern Germany, for instance, she had an unrivalled opportunity to extend her study of the current range and conditions of WRAC employments. Considering the future, she was able to put her experience into practice. She had become increasingly concerned that women married to other army personnel were leaving the service unnecessarily, a loss which she stemmed through the simple solution of collocating couple's postings.

Although Field advocated integration of women with relevant army units, to release more men for combatant tasks, she was against their full employment as infantry, or in armoured formations. Nevertheless, their partial integration into combatant corps or regiments in supportive roles was, she considered, realistic, and she approved women's fitness and weapons training. Invited to America by the then British military attaché in Washington DC, to discuss early trials of women's integration into combatant units, at home she also backed the trial of mixed platoons, one infantry and one Royal Artillery. The Royal Gloucestershire regiment volunteered to be the first infantry battalion to take part in this particular trial, which was a resounding success, though the experiment was not at that time continued. In spite of her reservations over close combat training, the employment and training reforms she initiated were a precursor to women soldiers moving further into forward battle areas. She reluctantly accepted the WRAC's eventual disbandment in 1992 as an inevitable consequence.

Ideally suited to her chosen career, assisted by boarding school-induced resilience, Anne Field was instinctively collegiate, a considerate, gifted leader, and, in the opinion of Major—General Michael Tillotson, an excellent negotiator with her male colleagues and a giver of sensible advice. She could be formidable, but this was generally taken in good part. (After all, acquiring a habit of command was a natural part of officer training.) A good business head stood her in good stead, as did her sense of humour. Her great interest in people went far deeper than just maintenance of long-standing friendships. Service women and officers alike greatly admired and respected her, and she had an outstanding ability to reach out to all ranks. Having a good friendship with her father and having grown up with boys, she was warmly understanding of her male military friends, whose company she enjoyed from subaltern days and among whom she was extremely popular; several of her friends later became generals. At a time when all their careers encompassed the turbulent closing stages of British and European empires, the cold war, the Irish question, and emerging weapons technologies (not only nuclear) which created increasingly complex national, international, and battlefield environments that all were obliged to convert into realistic military practices and doctrine, Field's professional ability to deliver reassurance as much as challenge, and to defuse tensions, as well as her steely determination to bring about results she deemed necessary, were highly valued.

After her retirement from military service in 1982, Field held two further significant, honorary appointments: as deputy controller commandant, WRAC, from 1984 until the corps' disbandment, and then deputy colonel commandant (1992–4) of the new adjutant general's corps, into which many WRAC members were integrated. She also served as vice-president of the WRAC Association from 1984 to 1997 and chair of its council from 1991 to 1997, being elected life vice-president in 1999, and as chairman of the ATS and WRAC Benevolent Fund from 1984 to 1997. Made a CB for her military service in 1979 she was appointed a CBE (civil) in 1995 for her services to the WRAC Association. In addition to her service as the Aden Veterans' Association's first patron from 2002, among other appointments she was for several years a council member of the National Army Museum and a member of the main grants committee of the Army Benevolent Fund. A fellow of the British Institute of Management from 1978, a companion of the Chartered Management Institute, and a freeman of the City of London, she became a director of the London regional board of Lloyds Bank from 1982 to 1991, and deputy chairman in 1990–91.

Although she lived in London, Field returned regularly to Keswick. An affectionate aunt and great-aunt, she was a keen follower of rugby, tennis, cricket, and especially horse-racing, and was often to be seen at Twickenham, Wimbledon, Lords, or Ascot. Truly life-enhancing in character, she was memorable for her fine cooking (her recipe for Keswick fruitcake was published in the New York Times in 1992) and generous hospitality. Her personality was naturally feisty, although when sharpness made itself felt, it was chiefly professional carelessness or stupidity which got her going. Not having married again, she nevertheless led a life rich in contributions to the military and civil worlds she inhabited. She died of pneumonia and other causes secondary to Waldenström's macroglobulinaemia at Hammersmith Hospital, London, on 25 June 2011. Her funeral was in Crosthwaite church, Keswick. On 17 October 2011 her memorial service was held in the Guards' Chapel, London, in the presence of three field marshals; she was the first woman officer to be so honoured. Among those who paid tribute was General Lord Guthrie. A trumpeter from the Grenadier Guards' band played last post and reveille for her. Outstandingly loyal and trusted by men and women friends for the whole of her life, she was seen as a 'soldier's soldier'. She was influential beyond the confines of her rank at the onset of a time of deep change both in society and in the military, and her preparatory work for female integration into military units was of great national importance.