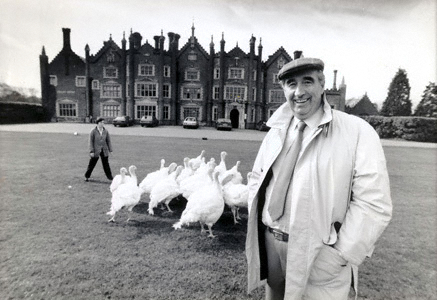 Matthews, Bernard Trevor (1930–2010), turkey farmer, was born on 24 January 1930 at 27 Cleveland Road, Lowestoft, Suffolk, the youngest in the family of two sons and two daughters of George Armond Matthews, motor engineer, and his wife, Frances May, née Hamby. He won a scholarship to the City of Norwich School, but left at the age of sixteen without any qualifications. After working for a livestock auctioneer in Norwich, and national service in the RAF, he became a junior underwriter with Commercial Union.

In 1950 Matthews had bought twenty turkey eggs and a small second-hand paraffin oil incubator for £2 10s. at a market, hatched twelve, and sold the chicks to a local farmer for £9. Encouraged by this profit, the following winter he bought three more incubators, and by 1952 he was producing 3000 turkey chicks, enabling him to leave Commercial Union and become a turkey farmer. On 30 August 1952 he married Joyce Kathleen Reid (b. 1928/9), daughter of Harold Reid, inspector; they adopted two girls and one boy. Although all his turkey sheds were blown away during the storm of 1953, and the turkeys escaped, he started again, and in 1955 he bought Great Witchingham Hall, a dilapidated Elizabethan manor house on the River Wensum, near Norwich, with 36 acres of land, for £3000. To begin with, the turkeys were hatched and reared in the bedrooms, but in 1958 he bought a disused American airstrip at Weston Longville, near Norwich, and built a large turkey farm and slaughterhouse, founding Bernard Matthews Ltd. He later bought five more former American airstrips in Suffolk and Lincolnshire for his turkey farms, and had 500 turkey houses in all.

During the 1960s Matthews concentrated on the mass production of oven-ready turkeys for the freezer, after developing a smaller breed of turkey, and by 1968 he was the largest turkey farmer in Europe. In 1965, as chairman and president of the British Turkey Federation, he was invited to the Soviet Union to advise Khrushchov on the modernization of the Russian poultry industry. The company was floated on the stock exchange in 1971, with Matthews remaining as managing director. He now turned his attention to persuading the public to buy turkey all the year round, and not just at Christmas. The pre-packaged Turkey Breast Roast was launched in 1974, and in 1975 he developed the 'extrusion' technique for processing turkey and other meat, in which the meat was taken off the bone and pumped into a long casing, enabling the development of spin-off products.

It was the television advertising campaign to popularize the Turkey Breast Roast in 1980 that made Bernard Matthews a household name. In the commercial he appeared in front of Great Witchingham Hall dressed in country tweeds, and in a broad Norfolk accent pronounced his turkeys 'bootiful, really bootiful'. Within two weeks, sales increased seventeen-fold. Bernard Matthews continued to front the television commercials until the late 1980s. The company developed processed turkey in many guises: Crispy Crumb Turkey Steaks, the first breaded frozen product, came on the market in 1982, followed by Golden Drummers in 1985 and Turkey Twizzlers in 1997. Cooked meat lines were launched in the 1990s, starting with Turkey Breast Slices in 1992, and by the late 1990s nine-tenths of the products were spin-offs rather than whole turkeys, with the traditional Christmas turkey representing only a small part of production. It was now an international company, with a large turkey complex in Hungary, a cooked meat factory in Germany, and three lamb factories in New Zealand (sold in 2007), but in 2001, following a takeover bid by the American company Sara Lee, Matthews decided to turn the company back into a family business, with 94 per cent of the shares owned by the family.

The reputation of the company was damaged during the 2005 campaign by the television chef Jamie Oliver to improve school meals, when he singled out the Turkey Twizzler (made with only 34 per cent turkey meat) as his prime example of unhealthy food. Matthews was forced to take this out of production after profits fell from £40 million in 2004 to £28 million in 2005. The company was already the target of animal welfare campaigns against intensive factory farming, and in 2006 there was more bad publicity after two employees were secretly filmed playing 'baseball' with live turkeys. The campaigners felt vindicated in 2007 when there was a serious outbreak of bird flu at one of Matthews's farms in Suffolk, and 159,000 turkey chicks were culled: the virus was traced to the company's farms in Hungary, and was thought to have spread more rapidly because of poor hygiene and cramped conditions. In 2008, in an attempt to improve its image, the company was rebranded as Bernard Matthews Farms, concentrating on its turkey expertise, with all turkey products made from British turkeys. When Matthews retired as chairman in January 2010, the company had over 2500 employees and an annual turnover of £335 million, rearing 7 million turkeys a year on 56 farms. He was appointed CBE in 1992. Although he came to epitomize for some the worst aspects of mass production and factory farming, he played an important part in changing British eating habits, turning turkey and chicken from luxury foods to food affordable by all. It has been estimated that British consumption of poultry multiplied twenty-five-fold per capita between 1950, when Matthews first started breeding turkeys, and 2010, when he retired.

Matthews was a generous donor to many Norfolk charities and institutions, including the Caister Lifeboat Service, Norwich Cathedral, Norwich Castle Museum, the University of East Anglia, and the USAAF Memorial Library. His interest in the life of Lord Nelson led him to support the Norfolk Nelson Museum, and he financed the ‘Norfolk—Nelson's County’ signs. He was appointed CVO in 2007 for his services to the Duke of Edinburgh Award Scheme.

Matthews separated from his wife in 1975 (though they never divorced), and in 1981 had a son by his Dutch mistress, Cornelia Anna Maria Elgershuizen (1950–2004), a relationship which lasted from 1975 to 1981. From 1981 to 1987 he was in a relationship with Natalie McCray, an American model. From 1987 he lived with his French mistress, Odile Marteyn, in Norfolk and St Tropez. He died at The Warren, Norwich Road, Lenwade, Norfolk, from bronchopneumonia and cancer of the pancreas on 25 November 2010, the American thanksgiving day, known as 'turkey day'. He left the bulk of his estate to his son Frederick Elgershuizen.