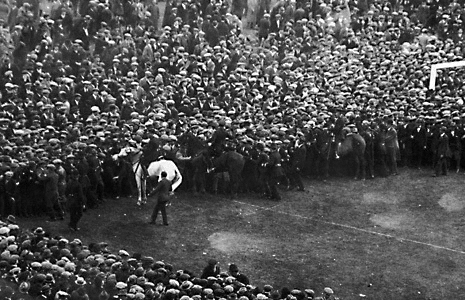 by unknown photographer, 1923 [Scorey on his horse, Billy]

Scorey, George Albert (1882–1965), policeman, was born on 30 December 1882 at 17 King Street, Bristol, the fourth child and third son of William Henry Scorey (1851–1887), shipping clerk and quay labourer, and his wife, Eliza Ann, née Clements (1851–1931), of St Stephen's parish, Bristol. Following his father's death in July 1887, the family lived at 4 Burgess Road, Bristol, where Scorey's mother worked as a charwoman prior to her second marriage in July 1903. In August 1898, aged 15 years and 7 months, George Scorey enlisted in the 2nd dragoons, Royal Scots Greys. Two years later he embarked for South Africa, where he served as a trumpeter in the South African War (1899–1902) and remained in Cape Colony until 1904. In August 1909 he formed part of the escort for a visit to Britain by the Russian royal family and later that month he was promoted sergeant and trumpet major. In December 1909, his initial engagement having been completed, Scorey enlisted with his regiment for a further eleven years. His record sheet was initialled by the regimental adjutant, Lieutenant Percy Laurie, who was later an important influence on Scorey's life.

On 31 December 1909, at St Anthony's Church, Canongate, Edinburgh, Scorey married Beatrice Paxton (1888–1915), daughter of Thomas Paxton, tobacco spinner, and his wife, Mary, whose family originated from Bishop Auckland, co. Durham. During this period the Royal Scots Greys were posted to several barracks across Britain and in 1911 George and Beatrice Scorey were resident at 63 Alma Terrace, York (census, 1911). In the following June Beatrice returned to Edinburgh to give birth to their son, George Frederick. With the outbreak of the First World War, Scorey's regiment formed part of the British Expeditionary Force and he was engaged in action at Mons on 22 August 1914 and, later that year, at the first battle of Ypres. In April 1915 he was involved in the second battle of Ypres and in the same month his second child, Thomas Sinclair, was born. Both sons were subsequently brought up by their maternal grandmother following his wife's death from tuberculosis in November. Scorey later saw action at the battle of Arras (1917) and the offensive to reach the Hindenburg line from August 1918. On 31 August 1919 he completed his full engagement with the colours and was demobilized.

On 24 November 1919 Scorey joined the Metropolitan Police, a move encouraged by his former commanding officer, Percy Laurie, who had recently been appointed as the Met's deputy assistant commissioner, charged with reorganizing the force's mounted branch. As a result, a number of former Scots Greys troopers entered the force, and there is no doubt that Laurie ensured Scorey's appointment despite his being below the required 5 feet 8 inches for the police service. After two months Scorey was transferred to the mounted branch and in June 1920 he was issued horse no. 62, a seven-year-old grey named Billy. On 16 September 1922, at the Church of the Annunciation, Chislehurst, Kent, he married Kate Muriel Witten (1890–1965), housekeeper, the fifth child of Arthur James Witten, sewing machine engineer and later builder; the couple had no children and lived in Chislehurst.

Scorey is now remembered for his actions, and their subsequent reporting, at the FA cup final held on 28 April 1923. The final, between West Ham United and Bolton Wanderers, was the first to be staged at the newly built but still incomplete Wembley Stadium. The new ground was designed to accommodate 126,000 people and, based on attendances at previous finals, the police anticipated a crowd of 100,000 people and made available 595 officers and a number of civilian stewards. Some 200 of these, including PC Scorey, were held in reserve at the nearby Wembley Park Road. In the event, the match attracted a vast crowd far in excess of previous years and far greater than the ground's capacity. More than an hour before the intended kick-off, it was estimated that 115,000 spectators had already entered the stadium and the decision was taken to close the turnstiles, during which time up to 20,000 more people were admitted. This still left huge crowds outside who now began climbing into the stadium. Later police reports stated that a further 50,000–100,000 people gained access in this manner and, with no room on the terraces, thousands were forced onto the Wembley pitch. As the scale of the problem became apparent, the reserve police officers were called in to help with crowd control and with clearing the playing surface. PC Scorey was one of ten mounted policemen who, assisted by others on foot, took 45 minutes to edge spectators behind the touch and goal lines. The arrival of George V appeared to calm the supporters who stood respectfully as the mounted police escorted the king to the royal box, allowing the match to begin at 4 p.m. That Scorey was singled out among those who participated in the pitch clearance was due largely to the distinctiveness of his horse, Billy, whose grey colouring stood out—as white—in the photographs and newsreels that documented the event.

The part played by the 'white horse' and his rider featured prominently in the first newspaper accounts of the match. According to the Daily Express the 'handful of mounted police' who entered to clear the pitch had been led 'by a lion-hearted inspector on a snow-white prancing horse', while Sidney Low noted how 'one officer on a white charger won the unstinted admiration [of the crowd] … and was often deservedly cheered' (Daily Mirror, 30 April 1923). The contribution made by the white horse and his rider was similarly noted during parliamentary questions concerning the policing of the final (Hansard 5C, 30 April 1923), and on 1 May PC Scorey was identified as the officer who 'with his now famous white horse' had persuaded 'the crowds to leave the playing pitch' (Daily Express, 1 May 1923).

Subsequent invitations to appear in public were declined, and PC Scorey and Billy returned to routine policing. A member of the Metropolitan Police band, in 1925 Scorey led a group of twelve trumpeters, formed by Percy Laurie, who performed at the many horse shows attended by the Met's mounted branch. He was also a competitor and, in 1928, won the king's cup at the Royal Tournament, Olympia. Scorey's riding partnership ended in December 1930 with Billy's death, after which Laurie had the horse's hoof mounted in silver, made into an inkwell, and presented to his rider. Following Scorey's death the well was given to the Metropolitan Police mounted branch museum at Imber Court, Surrey.

Failing eyesight prompted George Scorey, then based at the Kentish Town stables, to leave the police service on 19 July 1939 with an ill health pension (TNA: PRO, MEPO 4/350, 145). He and his wife now moved to Clarendon Mansions in Hove, Sussex, where they lived quietly before returning to Chislehurst. In retirement Scorey spoke only occasionally about his actions in April 1923. He did so with a typical modesty, recalling the skill of his horse, the crowd's good humour, and his own role as being merely 'routine procedure, adjusted to unusual conditions' (The Guardian, 2 Dec 1956; Daily Express, 21 April 1965). Though given tickets to every subsequent FA cup final, Scorey—who had little interest in football—did not attend another match after 1923. He died at Brook Hospital, Greenwich, on 14 April 1965 from bronchial pneumonia and was cremated. He was survived by his wife, who died a month later, and his younger son—his elder child having died in 1929.

Known colloquially as the ‘white horse final’ since the late 1920s, the events of 28 April 1923 have routinely featured in histories of the FA cup and English football—typically, if somewhat misleadingly, depicted as an act of singular ingenuity in an age of good-tempered mass support. In 2006 an entry route to the new Wembley stadium was named the White Horse Bridge following a poll of football supporters.